X-Wing: Into the Asteroid Field 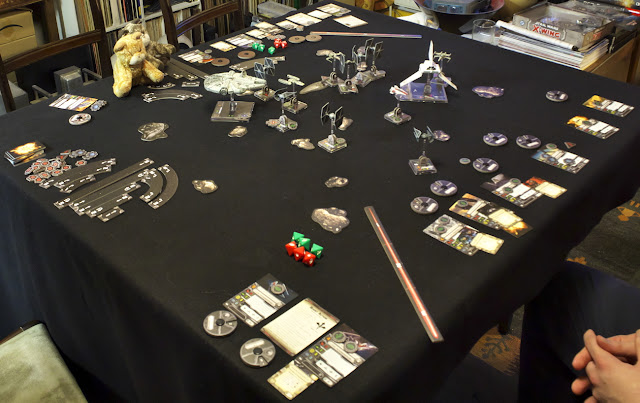 Sunday last, we had some friends over for the afternoon from the Physics department, who had all expressed an interest in Star Wars and were up for learning to play X-Wing.  For the occasion I played the soundtracks to the movies in the background, which added a certain ambience to the two games we played.

The first was a training game, no cards, no asteroids, just a simple kill everyone game.  After that the interest was strong in playing another game, but make it more complicated.  So I added an asteroid field and cards: astromechs, upgrades and weapons: ion cannons and proton torpedoes.  The scenario was for the Rebels to stop the Imperial shuttle from leaving the table with its precious cargo of handwavium.

A late addition, because Susan was busy cooking, was bringing on the Millenium Falcon for her to play towards the end of the second game.  The Falcon swept up the table and had a pop at stopping the Imperial shuttle from escaping, but Han failed to save the day.

Much fun was had, and I made at least one convert to the game, hello Sam, and he plans to buy a copy of the game and introduce all his friends to it.