Too hot to paint or build models in my spare time, so I've been out shooting instead.

In my imagination, I see myself riding through the glen, wind blowing through my hair, shooting arrows. If only. Mostly melting into a puddle or when indoors, huddling next to the aircon.

Anyway, enjoy the heatwave while it's here. This being Britain, it probably won't last.

CASDA 5136, Combat Armor Suit Detachment Alpha, is my Green Beret Special Forces unit that appears in my second novel Strike Dog. As I was writing this piece up, I realized when I described CASDA 5136 in the book, that I had created a force that was doctrinally different to my Marine Corps 1st Combat Armor Suit Reconnaissance Company.

I was just writing a cool action sequence for a character in a combat armour suit. But on reflection, it's clear to see that by describing the weapon loadouts I created a force that was functionally different to the one I described in Bad Dog.

That is what I would call, creatively serendipitous.

Anyway, I've been looking at my Ape suits (acronym for: Autonomous Pilot Expert-system) and in particular Sgt. Espera's weapon loadout. In Strike Dog I describe him having a recoilless rifle, but my first attempt at instantiating one was less than satisfactory, and I rebuilt it using the parts I had for the Marine gauss rifle. Comparisons of both can be seen here.

Hence this new build. I still have to do some further work involving Milliput, but I'm liking the shape and feel.

I have parts for three more Army Apes tucked away, so my plan is to make half of CASDA 5136. The other six mechs would be identical, as in carrying the same sort of loadouts. My thoughts being that each half of the detachment was a mirror of the other. Like this.

So, Espera is the heavy weapons specialist, hence he carries the big recoilless rifle. Though a fat lot of good it does him, but to say more would be spoilers. 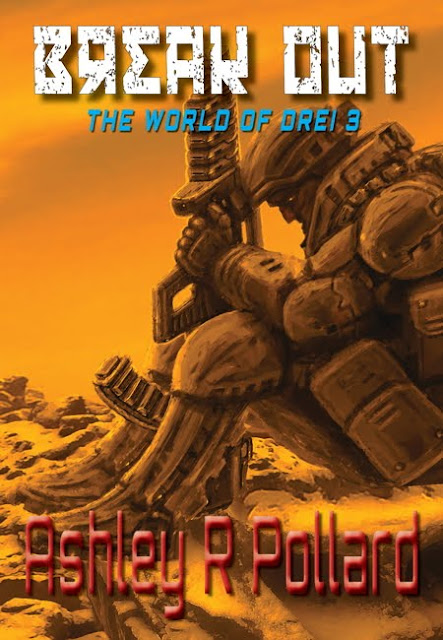 I'm happy to announce that Break Out, the third story in The World Of Drei series is now available to buy on Amazon.


Defeated, Lieutenant Morozova and Sergeant Rozhkov get the chance to rest and recuperate. Refitted with state-of-the-art equipment they must be the eyes of a newly formed battle group. The point of the spear.

The third story of a future Russian civil war set in the World of Drei universe, "Break Out" delivers combat-grade military action revealing how human camaraderie grows in the face of terrifying adversity.

If you've not yet read any of the stories in this series then all of The World of Drei stories can be found here.