Well I had a bit of a weekend, as in nothing seemed to go right with my painting.  First off my Russian walker mech has turned into one of those faffing hell projects.  You know the ones I mean, where you take two steps forward and one step back.  So it's still not finished.  Then I hit a problem with my combat armour suits I'm painting up to match the two I've already done.  Let's just say that I was cursing the lack of opacity in my new chosen green.

Anyway, I managed to finish these.  Six bases of PetMen that are Dream Pod 9s GRELs that are all left handed, which really bugs the hell out of me.  This picture is going off for the TFL 2015 painting challenge, which is the first time I've had anything to submit for three months. 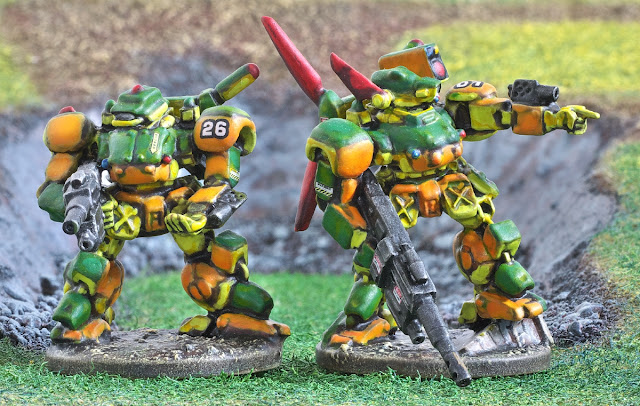 This was going to be a post about taking pictures, and how to up you game, but my game is so good that even when trying to show the problems I failed to produce pictures that were significantly lacking in depth of field.  As a result I went off and had another go and producing the images I needed and found I had written the basics for a short article.  I talked to Henry Hyde and he said go for it, so rather than appearing here my article on upping one's photographic game will be sent to Miniature Wargames & Battlegames magazine.

So what you see here instead are some nice portrait shots of my Bad Dog CASE-2X mecha on a piece of my terrain.  And the first close-up is of Lt Tachikoma's CASE-2XC. 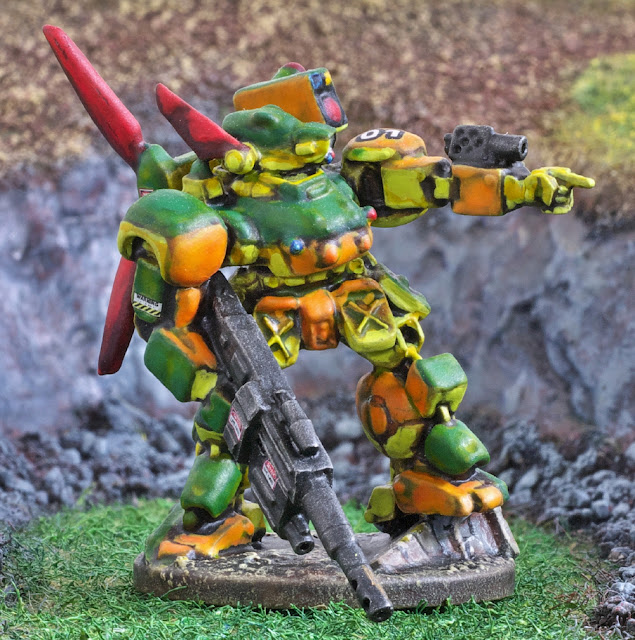 And below is the close-up is of LCpl Kowalski's CASE-2X. 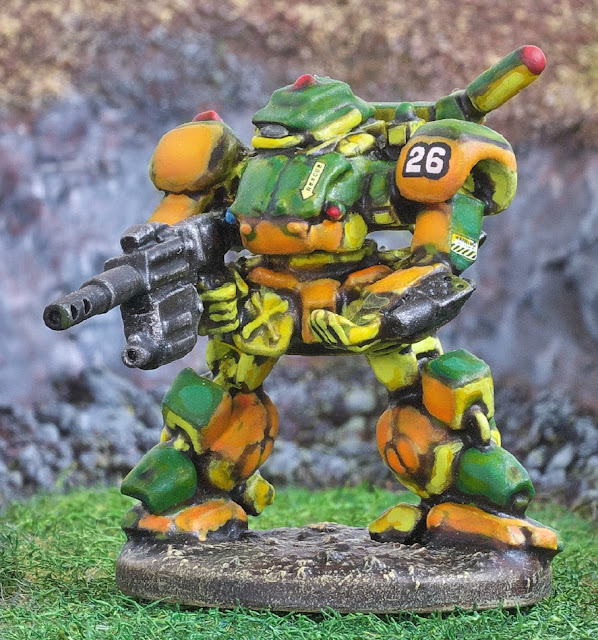 Before I finish I just want to show you all a side-by-side comparison of two shots.  The one on the left is a single frame, and the one on the right is made from a stack of images.  One can just about tell the difference in the quality between the two methods of taking a picture.  You'll all have to trust me when I say the image on the right is sharper.

This really is a case of one can't see the difference unless one is looking at the hi-res images on one's monitor, and know what you're looking at, because I'm reaching the pixel resolution of my screen.

Here is a nice picture of my original Pink Panther battlemechs that I painted back around 1990.  This is the full shot of the blog's motto picture; Gotta Fight? Bring a mech. Bring lots of mechs...  Hard to believe now, but back then I actually won first prize in a painting competition at the Colours Wargame show in Reading when it used to be held in the Hexagon centre.  I post this as a reminder not to think too highly of one's own work, but also because painting models, and taking pictures of them is a journey in its own right.

Back here I talked about getting a new camera.  Itself a journey from my beloved Pentax MX 35mm film camera to using a Sony Cyber-shot DSC-V1 digital camera, and then to acquiring my current Panasonic Lumix DMC GF1, which is a micro four thirds format SLR (single lens reflex).  Since first getting this camera I've been very lucky to have been given an Olympus M.Zuiko 60mm F2.8 macro lens. 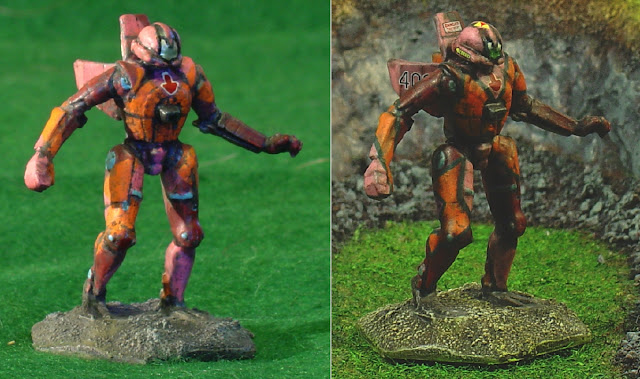 Not only has the quality of the picture improved, but the painting too, largely driven by seeing the pictures of my work. 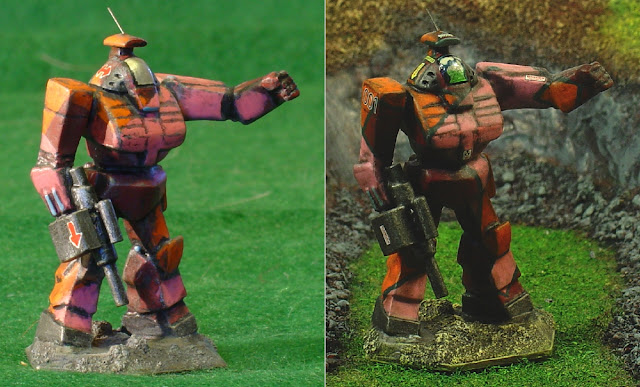 At one point I had this crazy idea to repaint all my Pink Panther mechs, and add decals to make them pop more.  I did these three mechs, and even painted a couple of new Bushmen up, but then the project ran out of steam.  For the usual reasons; lack of motivation. 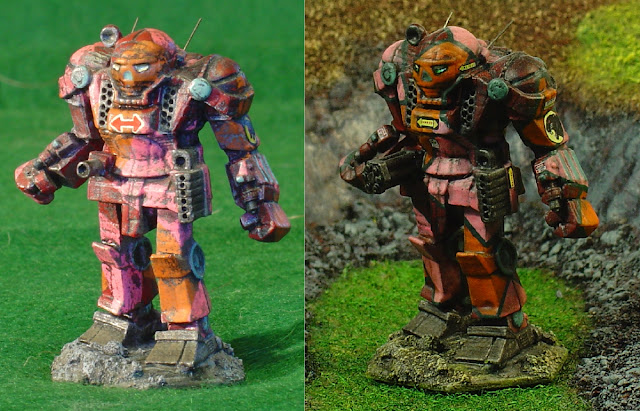 Still, looking at these pictures of before and after I'm inclined to think that in the long run I may come back and finish repainting the rest of the mech company, after all it's only a dozen models.  I'd have more motivation if I were playing BattleTech.  Still mustn't grumble, but rather try to play more games.

Besides that I have some ideas about writing up how I now take pictures to improve my model making, which may mean I will end up finishing this project off or not.  Whatever happens I will have me some fun...