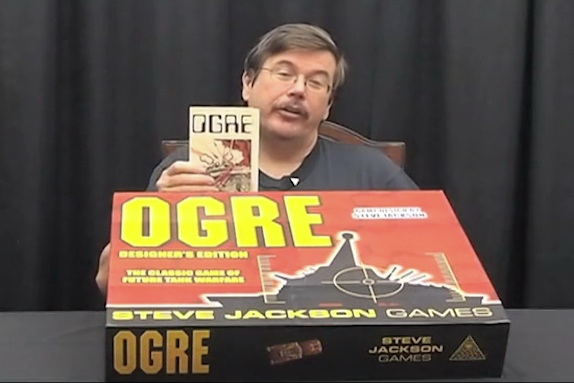 For those of you who are not obsessed by giant cybertanks and SJGs Ogre/GEV game you may have missed the fact that this weekend was the official launch party for the game that weighs twenty-eight pounds.  All the excitement can viewed by clicking the link above.

The big announcements are four supplements called Assault Packs with new units to play with.  The Golem Ogre and the Chinese Dragon hybrid crewed Ogre being the biggies, the others include assault GEVs and missile GEVs.  Now all I have to do is cross my fingers and hope that they will make miniatures for these.

One of my two orders arrived this week, so I now have four super heavy tanks, eight Yankee light tanks and twelve Ranger heavy tanks to add to my North American Combine force.  Unfortunately, the parcel with the Mark 1 & 2 Ogres has not arrived.  I fear the worse has happened and the parcel has gotten lost in the post. 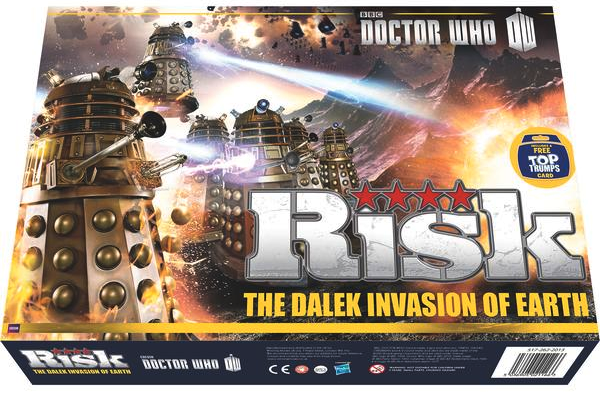 Oh boy, oh boy, oh boy.  Now if only the miniatures are halfway decent and a usable size for wargaming.  Even if not who can resist?  Resistance is futile.  Link here, list of contents as follows:


Three hundred and fifteen Daleks, they must be mine I tell you.  They will be mine.  With them I shall conquer the world and the Daleks will reign supreme.  Exterminate, exterminate.

It was that time of the year for me to go again and visit Crystal Palace, a grade two listed building, and take my friend Trevor and his son Oliver to SELWG on what turned out to be a rather wet day.  As you can see Oliver is now taller than his dad.  We bumped into Graham as we entered the show and had a natter, as one does, before diving in and see what the show had to offer this year. 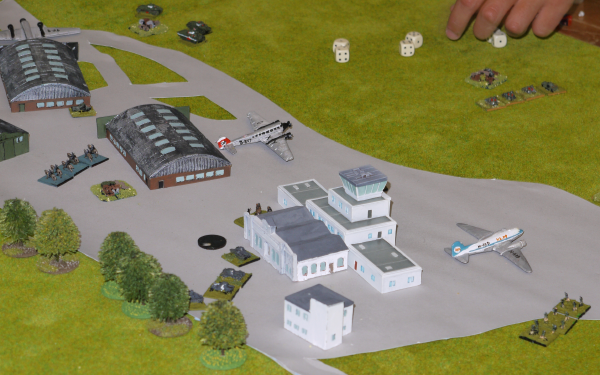 The first game that caught my eye was this very nice 6mm Very British Civil War game battling for the control of Croydon Airport, which I believe was put on by a father and his two sons.

Wondering around the show it seemed less busy than last year, which I would put down to the appalling weather putting people off.  It was that or the economic recession, take your pick.  Nice to see youngsters in attendance too. 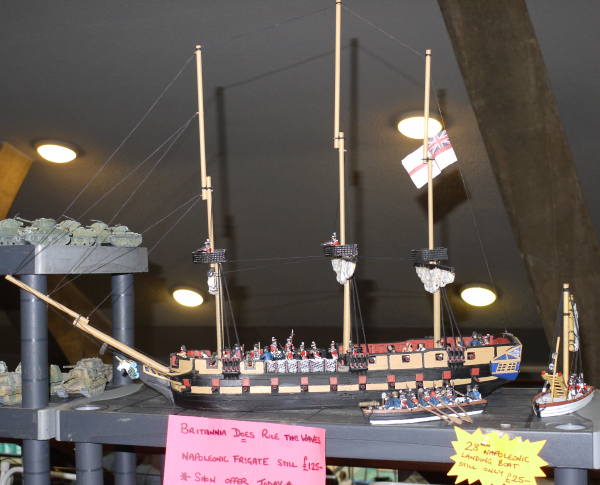 Oh if only I had the time, money and room to play Napoleonic naval games at this scale.

I also spoke to Jon and Mel at GZG and Paul who came up and introduced himself as an occasional reader of my blog.  Hi Paul!  Anyway, Jon apologized for not having the new 6mm not VOTOMS cast up in time for this show, but promises me definitely by Salute.  I've promised him more conversions when he has got the first lot I did cast.  He also mentioned some not VOTOMS at 25mm for 15mm power armour, or robots etc. 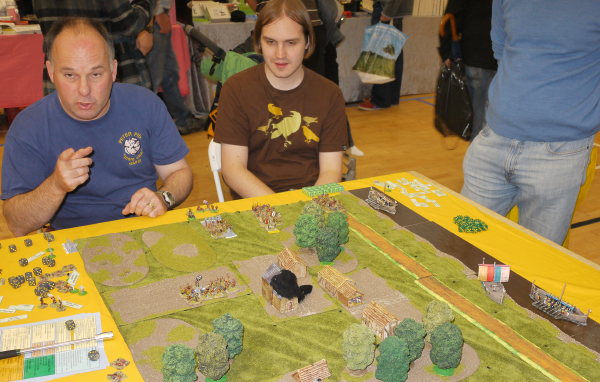 Yes he is looking at me as I took this and saying don't put me in the picture, but relented when he saw it was me and the chance of fame and glory from appearing on my log.  Who am I kidding here?  Peter Pig demonstrating their new Vikings game called Longships: The Wrath of the Vikings.  I really like their rules and play AK47 from them, and his figures and exquisite.  Now all I've got to do is get around to painting the ones I bought several years ago. 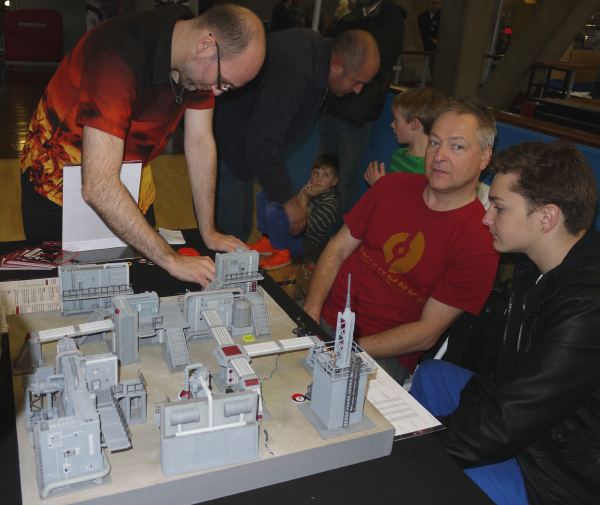 Trevor and Oliver playing 7TV by Crooked Dice as the Federation bad guys, or something approximating Blake 7 bad guys, and losing to a couple of seven year old's.  Oh how we laughed.  Okay, how I laughed.  They took it well and had a fun game.  Oliver's only complaint was that there were no Zombie games being run this year.  He likes killing zombies, what can I say?

A Lace War's game put on by SEEMS: South East Essex Military Society, which I was a member of a long time ago.  They always put on a good looking table. 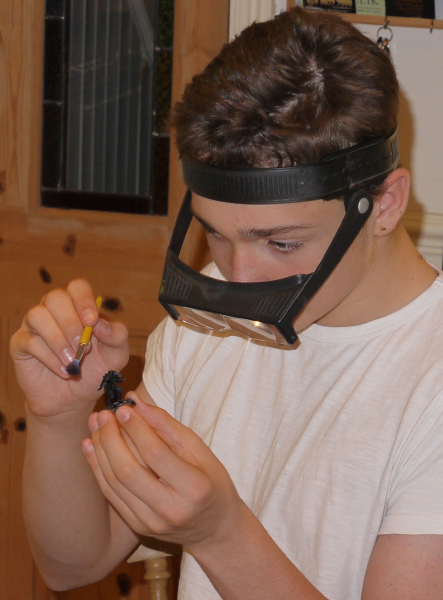 Finally, Oliver at home painting up his squad of miniatures for a game called Mercs that he had to assemble immediately we got in the door.   I think I can say a job well done and the another generation of wargaming ensured. 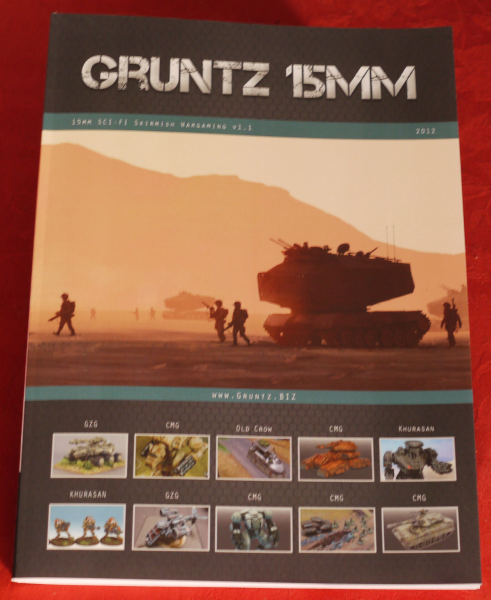 Last week I received in the mail a copy of Gruntz.  Some of my readers may remember I reported playing Gruntz at last years SELWG, which you read about here.  I enjoyed playing the game, helped by the fact that I won, and receiving the prize of the day and have been wanting to review the rules for Henry for some while.  So now that I have a copy of the rules in my grubby paws my plan is to start work on the review at the end of the month; this down to being in the middle of finishing a novel, which you can read about here, and wanting to play another game or two to refresh my memory of the rules next weekend at SELWG.  I've been following the development of Gruntz over the years (scroll down for picture) and have to say this is one fine looking rule book where I know for a fact has been extensively playtested and revised in light of feedback from the players.

Look, I'll let you into a little secret now.  Promise you won't tell anyone.  It's going to get a good review from me, so go buy a set now and then read my review later.  You'll be glad you did.

I will also be putting a game report and overview as a follow up on here, once the review has been published in Miniature Wargames, along the lines of my Heavy Gear review game I've played.  Though be warned, I will be playing my games using 10mm figures, because that is what I have, and to show that one can do crazy things like that.  So more to come.