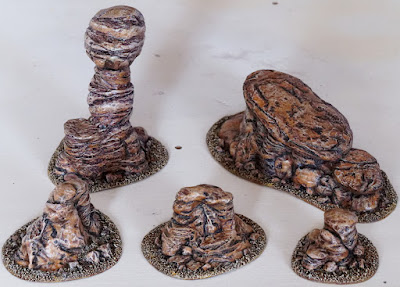 First up is some Gale Force 9 Badland Tors, which I repainted because I wanted more variation in the colour pallet. And I think these turned out pretty good.

For good measure I painted my Stone Heads from Dream Pod 9. Nine seeming to be the number that manufacturers name their companies. Just a coincidence, but like adding an X to a name makes it sound cool. 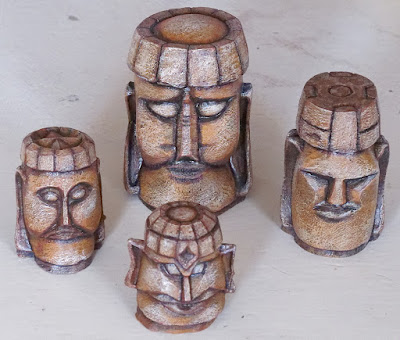 I did a lot of shading with glazes, filter, drybrushing to get that weathered craggy look. And finally, three 15mm robots and a jump-off point for using with my variant of the Chain-of-Command rules I'm still working on.

I need to matt varnish all of these before using them, but just felt the need to show some proof of life.

Stay safe, and I'll catch you all on the bounce.

I've been spending a lot of time at my workbench with only this handful of finished miniatures to show for it. I can only conclude I'm as slow as snail snot. Or some thing?! I'm pretty sure that when I was young I could paint whole armies in a week (30 plus figures).

Now, it seems to take me forever to do this third section to complete my insurgent platoon and some support units.

But here they are. The three Toyota Technicals below having had their gunners repainted to match my new standard paint job.

The green truck is new. I based the camo scheme on a half-remembered photo I saw, which funnily enough I found again.

To no ones surprise, my interpretation of said scheme is different to the original. Mostly down to the fact that I was painting my model to look nice, whereas the rebels just sprayed some blotches on their battered old truck.

I also worked on the red trucks highlights and shadow, and yes that was probably unnecessary, but I did it anyway. The yellow truck I mucked up whist doing so, and guess what?

I ended stripping and repainting it, but I think I did a better job on the tiger stripes. You can compare the previous paint job here. 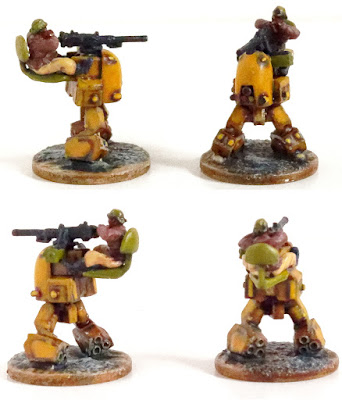 Of course, I now need to varnish them. I've run out of Testors Dullcote and no one has any, and it may no longer be being made too. In further bad news, my other preferred matt varnish from Windsor & Newton is also out of stock.