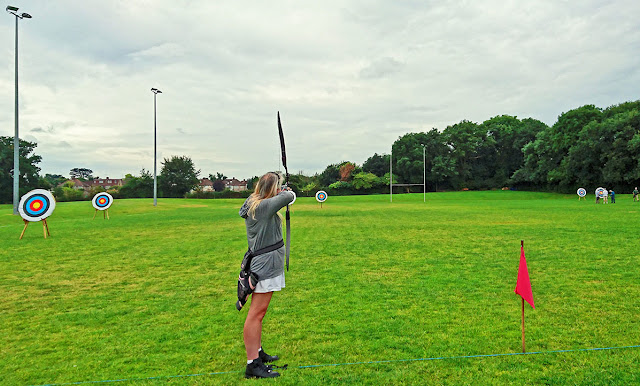 I haven't talked about archery practice for a while, not wanting to bore people with my latest passion, but today was a day worth talking about.

Last Saturday I bagged some second hand Easton ACC 750 arrows, which are a better match for my poundage than my Easton Navigators 660s.  However the nocks were too big for my string and the fletchings were pretty ropey, so I spent time over the course of the week refurbishing them, with a little help from Susan. 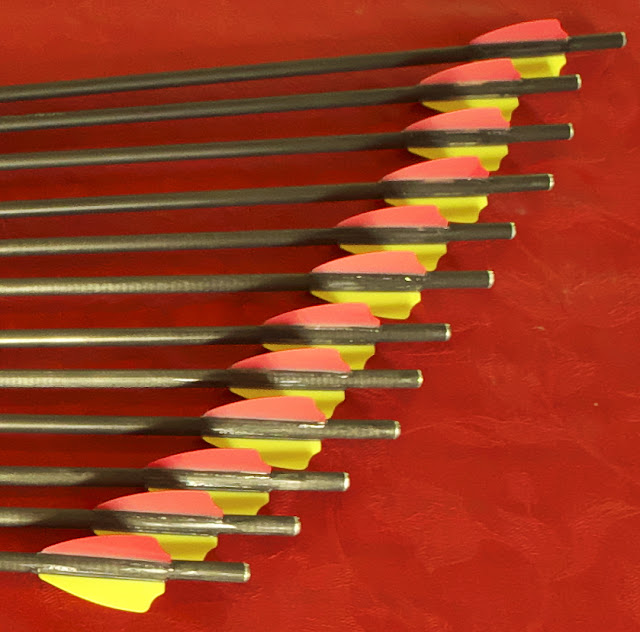 These are Norway Industries 1.5 inch Fusion vanes on a 3 degree helix using a Bohning Tower Fletching Jig.  The red vanes looked a litttle pink to me, so as it's useful to have two sets of arrows with different colours, I used a permanent red marker on six of them.

Anyway, with new nocks fitted, which arrived in the post on Thursday, I was all set for Saturday.

Last week with the old arrows I shot 81, shooting at 60 & 50 metres, which is called a Long Metric 2 where one shoots three dozen arrows at each distance.  This week we changed to 60 & 50 yards, which is called a Western shooting four dozen arrows at each distance, to practice for the club handicap that's being held next month. 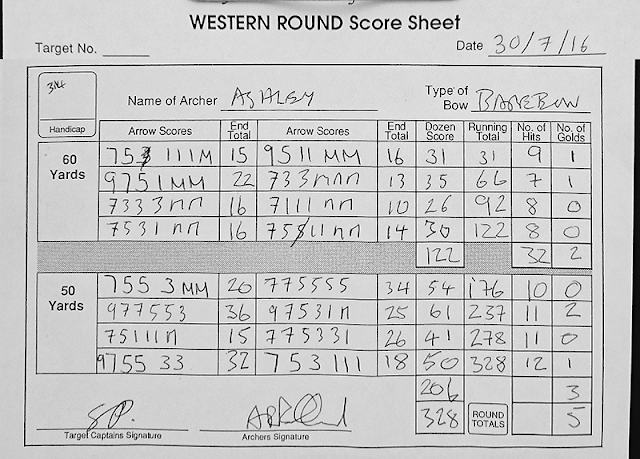 I scored 328, which is enough to get my archer first class badge, if I can repeat the success again on two more occasions.  Doing so well is stuffing my handicap score, but it looks like I'm in the running for most improved handicap of the year award.

NB: Me shooting a longbow for the first time here. 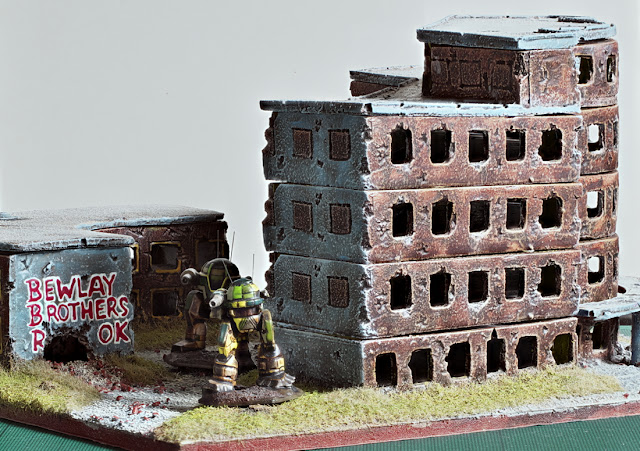 As I said, I have two of these rather impressive 12mm scale building that were bought from Fieldworks, but are no longer made: they seem to have stopped doing 10/12mm building altogether.  Click here to compare the blue walls versus the grey from the other building. 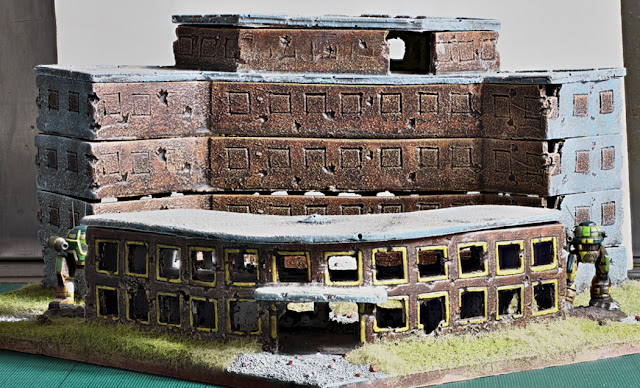 The reverse of the two building that in my imagination is some sort of hospital, which was why I used blue for the trim because it's the colour an NHS Trust I worked for in the past used. 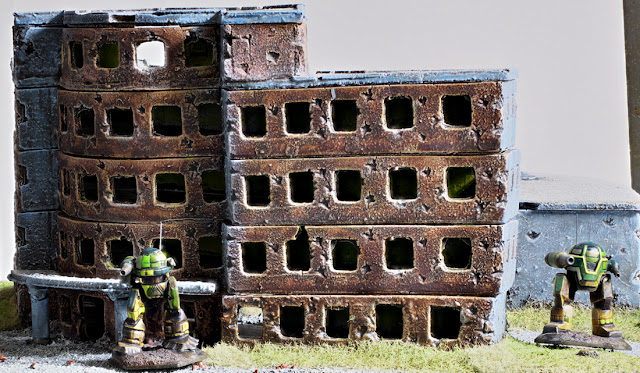 With the aforesaid Bewlay brothers, in their awesome Urban mechs, striking terror into the powers that be of the planet Mummerset, which was the setting of my Operation Sandbox BattleTech campaign. 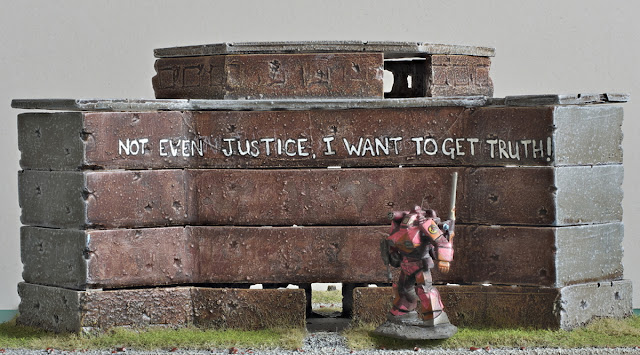 I have two identical buildings like the one above, and I managed to paint the exterior walls blue on the wrong set of walls on one set of floors.  Unfortunately, while the buildings are the same the floors from one will not fit the base of the other.  I had even painted the interior walls with different colours to indicate this, but managed to forget this salient fact in my flurry of enthusiasm to get the buildings off the workbench.

So I ended up having to repaint the end walls grey, and I took the opportunity to run a drawing pen around the grafitti to make it look sharper.  The slogan is from the Japanese show Fang of the Sun Dougram, Taiyō no Kiba Daguramu.  The lead hero mech, Daguramu, became the basis for BattleTech's Shadowhawk mech, and for those who are in trivia, this was Natasha Kerensky's original ride.


The close-up shows the depth of field that I can get using the auto focus bracketing feature on my camera, and it opens up whole swathes of ideas for interesting pictures that would be otherwise impossible to take. 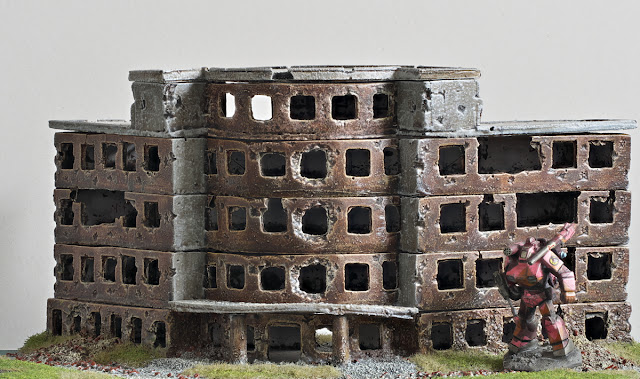 This is the front of the building, and yes my Shadowhawk's shoulder mounted autocannon swivels.  When I finish the grafitti on the other building I will post a picture on the blog and link back so you can compare the difference a small change of colour to the exterior can make to the feel of a building.

This and my other buildings are part of my Newten Town project, which I started here and last commented on here.

For the past few months my hobby focus has largely been on taking pictures with my new Olympus OMD EM5 Mark 2 micro four thirds camera.  One of the reasons I chose the camera was because it features a 40 megapixel Hi-Res mode, which I thought was super awesome.  It is, but after months of practice I've come to the conclusion that the really super awesome feature of my camera is the automatic focus bracketing feature, which was a firmware upgrade that the reviews I read didn't mention.

That's serendipity for you.

I've been sorting out some terrain and changing the graffiti I wrote on one of the building from FA*M Will Set You Free to Death Will Set you Free – driven by a friend who was playing in my old campaign who read FA*M as Football Association, rather than Freedom Army, which rather spoiled the effect that the graffiti was suppose to have for me.


The re-write involved sanding down the original letters to, to remove them, and then repainting the wall.  As I didn't want to go to all of the effort it would require to repaint the wall to the original colour I took a short-cut and repainted it red.

I've been trying to do a real comparison of the advantages and disadvantages of using the Hi-Res mode of my camera, and the pictures in this post have been re-shot several times to get results I was happy with, and proving that I'm not as good as photographer as I like to think I am.


In some ways the results of this comparison are a little disappointing because the depth of field at F8 is insufficient to meet my needs, even thought the out of focus background is quite nice the lack of sharpness across the model is telling.


Looking at the pixels, by taking a full size crop from each image, I think it's quite clear that the focus stack has produced the sharper looking image, and if I wanted to blur the background it would be possible to remove images from the stack to achieve the effect.  So for now, until Olympus offer a firmware upgrade that allows automatic focus bracketing in Hi-Res mode, focus stacking 16 megapixel pictures is the way to go.

I managed to drag myself away from the computer and do some painting, aided by my paint order having arrived.  Didn't realize I'd fluffed the first attempt at taking this focus stack until after processing the stack – that'll teach me I guess.

Still, looking on the positive side, I managed to put some paint down on my models, which has to count for something.

These are Heavy Gear Utopian & Eden faction Golems, which are described on the packaging as heavy augmented infantry.  I'm using these models, with small modifications made to them, to represent the Chinese all terrain suits from my novel Bad Dog.  I have another eight of them to assemble to make up a platoon, but I'm thinking have I got the selection of loadouts right?  I'm tempted to add an extra heavy gunner (second figure on the right) to each squad so as to have two per squad rather than one.

Still some more shading to do before I can do the fiddly stuff like decals etc, but one step closer to completion, and it was nice to remember how much I enjoy painting.

My Kurita force is very much a work in progress, though the same could be said of all my battlemech forces, but I at least can field a lance or two for the other factions.  All of these have had some modifications made to them, ranging from quite minor to more ambitious work (some have commented that it takes guts to cut apart classic Unseens and repose them, but to me they're just my mechs).

The mechs above are missing a Phoenix Hawk and Archer, which I have not yet finished assembling , and my plan is to have three lances of four mechs with the Wasps and Stingers from the picture below to make up a traditional twelve mech company.

I haven't managed to put the base-coat of yellow on all of these, but the WW1 inspired jigsaw pattern camo scheme seems to look OK on the four light mechs I started working on.  I have  Phoenix Hawk LAM to assemble too.  My thoughts at the moment are that the LAMs will make a long range reconnaissance lance, and in addition I have a resin MAC Monster to assemble to finish my House Kurita force.

As per my current photography practice both of these pictures are focus stacks from twenty-five individual pictures using my 14-42 zoom (ISO 200, F8 at 1/6th of a second).