After the paint peeled off these models, stripping them back to bare metal effectively meant I'd taken a one step back towards completing this project. Its not as if I don't want to finish them unless they're perfect, though there's some truth in my wanting to make them look as good as possible.

Instead, it's more like I think it would be a shame to waste an opportunity to try and make the most of a bad outcome, as I didn't want to let all the work I had lost bring me down.

So I chose to see it as a second chance to do the best job I can with these classic RAFM miniatures.

The various shots that follow show where I cut the joints when rebuilding the models, using a combination of Kneadite (green stuff) and Milliput.

Green stuff is easier to sculpt when you want organic shapes, but Milliput is better for filing into shape when you want flat surfaces, and parts to be square. But on more than one occasion I mixed them both together, because green stuff can be annoyingly sticky to work with. 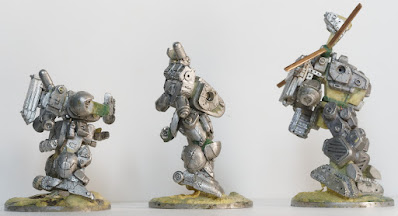 The work I carried out included re-sculpting the arm joints on the model on the left, and then rotating the left hand so it sits better with the main gun.

I also reposed the legs of the other two models. In addition, I rebuilt the torso of the model on the right. I might, if I can figure a way of doing so, make a flexible ammo chute feed for it too.

Doing so would give me more flexibility when pose it for pictures, as now all the arms and the torsos on the models can be moved.

But, I'm pleased at how their stances turned out. I think they look more dynamic now, and it has motivated to get on with painting them – again! 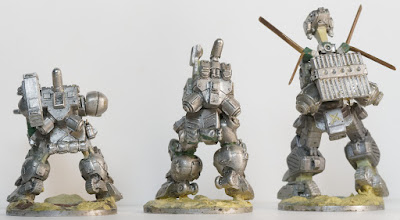 Unfortunately, these shots don't show the work I've done texturing the bases sculpting in foot prints and track marks. The feedback from the first two models I finished  pointed out that the bases were a bit bare.

I thought the critique was fair. The bases were a bit plain.

I'm not big on fancy bases, but given the amount of work I've put into these I thought I'd give it a go, and see what I could do to raise my game. After all, it can't hurt.

And finally, given this project turned into a labour of love, here's a reminder of what they looked like the first time round. I think I can safely say I've definitely taken them to another level.

As always, thank you all for following my blog. Catch you on the bounce. 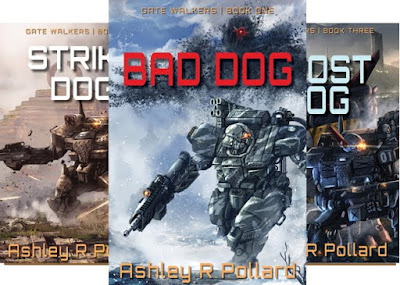 After a year that feels like living in the Bad Place, I've started to get some interest back in making models and playing games. I'm still sad to say that I have no mates to play Heavy Gear with, and therefore have little chance of teaching the casual person to play a game I don't fully know how to play.

Also, I'm still struggling still with a lot of self-doubt about my fiction writing. I've gone through a period of stagnation, and at the moment it would be stressful trying to jump back into writing full-time.

So getting back into the saddle too soon might trigger a relapse of my depressive episode.

But writing something would be good for me. So, I have decided that I might try writing a set of rules for the Gate Walker universe setting. If only because it will be easier to teach people to play a new game if I wrote rules.

I may be biased, or deluded, in holding that opinion, but I do have the previous experience of designing game rules from writing OHMU War Machine.

Given the amount of time between the last time I considering writing a set of rules for my setting, it's time to reassess my options. My previous thoughts on the rules centered around updating the command control rules, and revising the available units to reflect my Gate Walker universe.

However, I'm unconvinced that I still want a set of rules that can handle battalion and larger sized combat groups. Also I might need to consider the option of being able to play solo as well. But I do know I want to capture the feel of #RealRobo combat.

I know, I know, what does that even mean?

1. Capture the feeling of future warfare with power armor etc.

3. Command and control rules, so the player acts at the level of each squad commander.

The first goal is a bit like being General Haig at the start of WW1. It's like me having to face the challenge of learning how to fight a war where technology has moved the goal posts on what works and what doesn't.

Fortunately, I won't have to put real people through the grinder.

Second, what do I mean by squads?

Optional off table support will be available to represent assets available to the combined arms platoon like: satellites; artillery, air-support etc.

Finally, I want the command and control rules to be a bit like Chain-of-Command.

Players get dice to roll that generate the number of commands they can give a turn (thinking this could represent limitations from bandwidth, ECM and ECCM that battles generate). But also allow them to focus on what heroes can bring to the action.

That sounds like a reasonable set of goals, but whether I can write a set of rules that other people want to play remains unknown. And now I have to think of a name for them. Please feel free to make comments now, before I start writing.

I'm sure this blog that will make my friend Roger laugh, as he predicted I end up trying to write my own set of wargame rules.