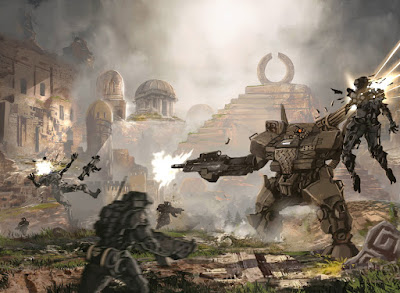 Another progress report. There has been progress. I've reached 14,843 words and I'm now down in the weeds.

By that I mean I've now have movement and combat resolution mechanisms that float my boat. I'm just at that stage where I'm working through the chapters making sure I'm not contradicting myself, and that everything is where it is supposed to be.

I'm checking the construction rules, where there are still some gaps from equipment not yet covered, and checking the section that describes model attributes, and cross referencing to the movement and combat rules, and came across an oopsie.

As in, I thought I'd described what the game allows players to play with on the table, you know robots, tanks, power armour, and mecha etc but, oops not stated clearly in the introduction that these units are what the rules cover.

It's not a big oops. But it is an oops. One where one finds one has described a bunch of rules, but not which models have access to said rules.

And then I remembered last night, while semi-awake, between dreams, that autonomous vehicles and robots will have a variant of the activation rules to make them feel different. This also ties in with the solo play and group play rules that Big Little Wars aspires to deliver.

Extrapolating how future science and technology affects war. You know, to make the rules not just another SF recreation of WW2 or Vietnam.

Important stuff. Not just fluff, but the flavour of meaty goodness that comes from giving players significant choices to make with different benefits versus costs, which creates the feeling on involvement in the game.

I saw the above Khurasan models, while browsing the Facebook 15mm group, and I thought they were awesome. They arrived and the resin castings are stunningly good. Someone might now say, "Ashley, I thought you were against anti-gravity vehicles in your games?"

Even though I'm not a big fan of anti-gravity tanks, because the science nerd in me equate anti-gravity with perpetual motion machines (courtesy of Isaac Asimov), but advance repulsors that don't break the way the universe works are another matter (courtesy of Sabine Hossenfelder and Isaac Arthur).

Besides, Arthur C. Clarke pointed out that the existence of technology that is currently beyond our ability is always a possibility. Repulsor fields certainly fit in the Clarketech paradigm.

And they're shiny. Must have the shiny.

I also ordered a bunch of 15mm figures too, which I will get around to sorting out pictures of at some point, as follows:

Five Corsair Battlesuits, which are a bit smaller than I thought they'd be, but that's better than being too large.

A pair of Downed Flyer or Mecha Pilots/Operators because, well just because.

Two Toyota Land Cruisers, with a ZSU-23-2 to add-on one Technical, for my insurgent force.

On top of that, I got a bunch of Tah-sig and Stikk aliens. An assortment of each, enough to assemble a platoon with support elements.

Yes, aliens. Because, aliens are a thing in the Gate Walker universe. I just haven't written the stories featuring the dangerous ones.