Ho ho ho and now I have some Heavy Gear Utopian Golem mecha, and a copy of X-wing and the Rebel Alliance Blockade Runner, neither of which was a surprise, but they were most wanted.   I did get given a non-wargaming present that was a bit of a surprise, a nice condition second had Birdy Red folding bicycle – it's German so it's all very technical with full suspension.

Have had a lazy day watching Wallace & Gromit, Gnomeo & Juliet, Top of the Pops, the Queen's speech, Puss in Boots, and the Goose is in the oven and we are just about to watch Dr Who.  So I hope you've all had a great day opening presents, eating and drinking, and are enjoying the day.

Well my parcel arrive from Dream Pod 9.  I'd ordered some Utopian faction Golems, and a support Armiger with drones, a Southern Jager, and assorted weapons.  Everything but the Jager and weapons went under the Xmas tree as a present, but was so excited I had to start assembling the Jager, and thought it would be good to show a size comparison picture of the Jager with my Takara microscale F144 VOTOMS.


What I find attractive about the Heavy Gear models is the number of different guns and missile packs that one can choose from.  While I was working on this I realized what my nagging doubts were really all about when I posted here.  My VOTOMS are lovely, but they will always be VOTOMS and what I want to do is build a force based on my Bad Dog universe background, and I think the Dream Pod 9 Heavy Gear mechs will make a good platform for me to customize models to represent the vehicles in my stories.

I know this is incredibly sad – author making models of the mechs in her own novels, but at least I can point any cover artist in the right direction about what a CASE-2X looks like.  Having had this epiphany I can now move on and pretend I'm somewhat normal and not totally obsessed with the wild imaginations of my mind.

Here are a couple of pictures of all the Ogre/GEV miniatures I managed to paint this year, which I submitted to the Vis Lardica painting challenge.  No doubt by the time you check out the link Robert will have posted them up and scored them for me (he has, I got 354 points).

I've been working on the ORBAT of my North American Combine force, which will be based on the contemporary US Army Brigade Combat Team organization.  I plan to post a piece on this once I have the photos of all the units done.  This may take some time.  Still I can enter them in next years painting contest, which will be good.


Previously seen on the blog the reinforcements for my French Pan European force.  I'm still left with a shed load of miniatures to paint to finish what I'm now calling the 7ème Brigade Blindée, which again is based on contemporary French Army practice.  I had a lot of fun researching both these and the American ORBAT's and I'm compiling the photos for a blog entry on these too.

In addition, all the work I've done will go into both an article for Miniature Wargames & Battlegames magazine as supporting material for my Escalation scenario with ideas to make a ladder campaign with force morale rules too. 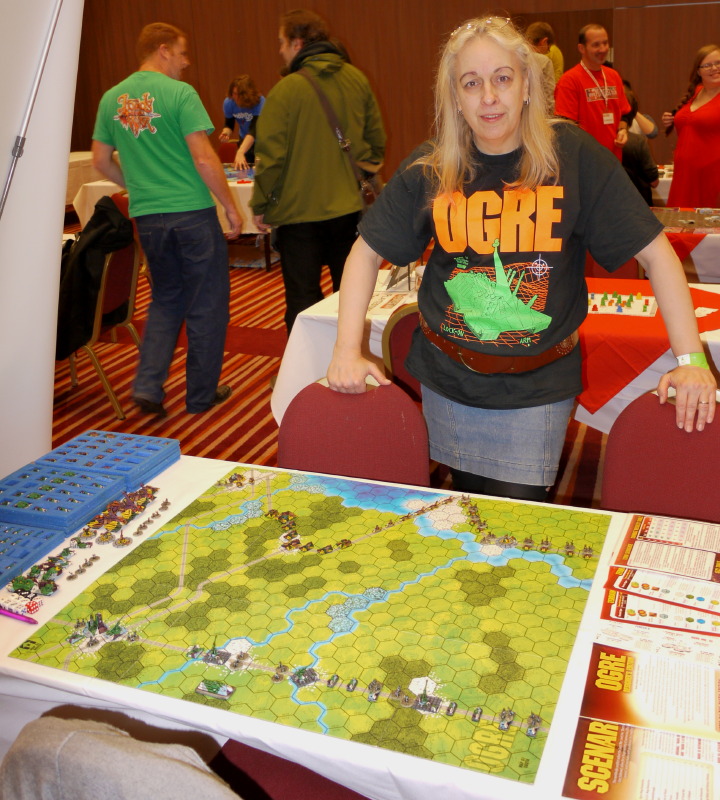 The last official MIB demo game of Ogre/GEV with miniatures at Dragonmeet.  I wore my Steve Jackson fluorescent orange and green Ogre T-shirt for the occasion.  The scenario was one of my own devising, and was designed to be unbalanced so that a new player would have a better chance of winning.

More miniatures than you can shake a big stick at.  KR Multicase FTW. 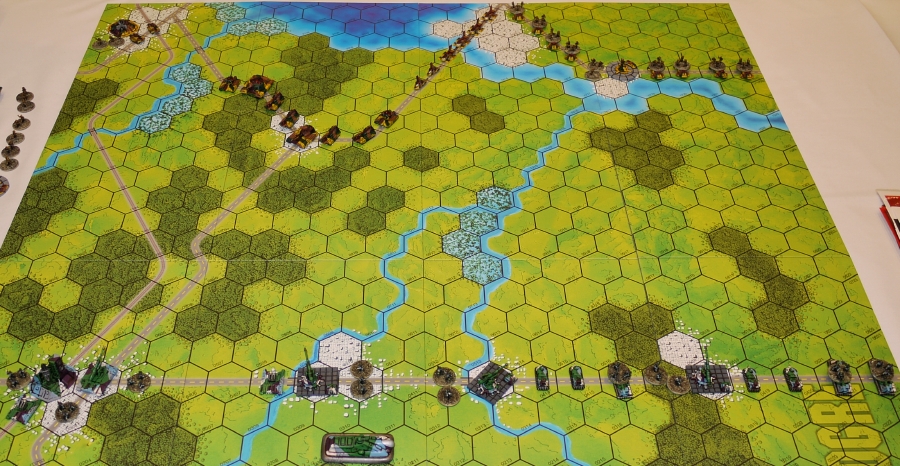 I managed to run three games during the day.  The show was packed and very busy, and quite frankly as I was running the games on my own three was all I could manage.  I actually adjusted the force composition you can see above before the second game started to give me three GEV-PC carriers to move my troops around to bolster my limited force.  I woke up today quite hoarse, and was told I sounded sultry by my partner. 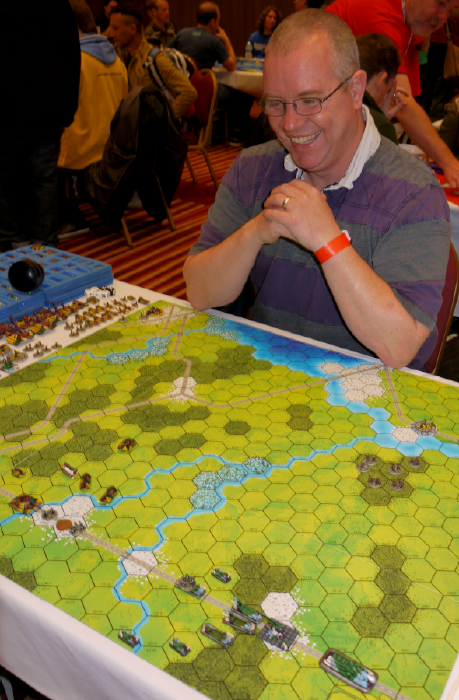 Ian was the first winner, seen here pleased at destroying two of my three command posts.  The other was a GEV-MCP, which can be seen running away. 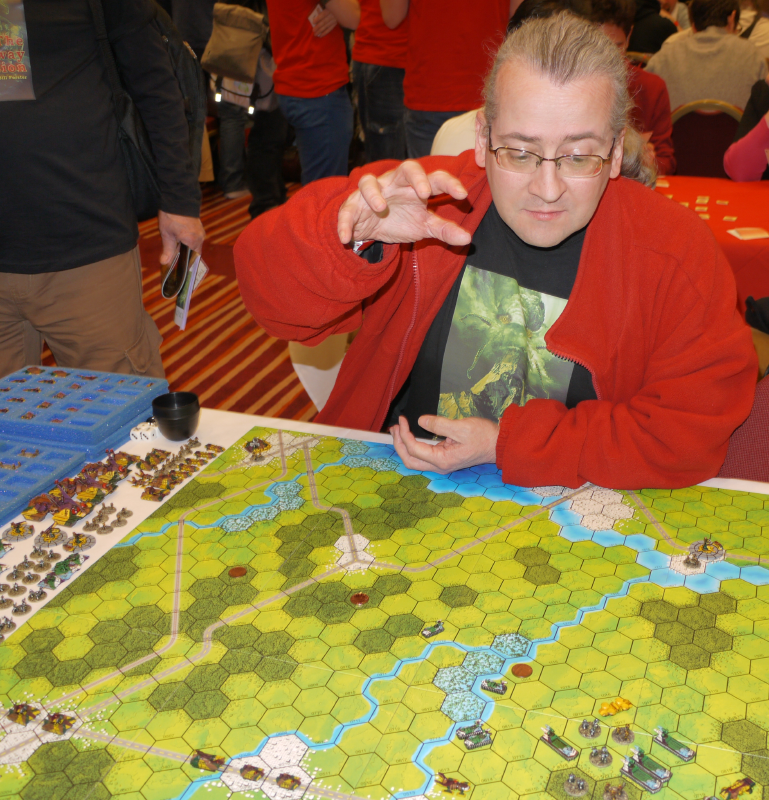 Justin won the second game, and was a really good sport for posing for this photo.  Again I was forced to retreat my GEV-MCP off the board and concede the game.  I shall be writing up this scenario with notes for a future issue of Miniature Wargames & Battlegames magazine with lots of ideas of force compositions etc.

Friends came and said hello during the day, so hi to Adam, and people who had played last year came and thanked me for the running the game.  Finally, I was surprised and delighted to meet my old friends Pat and Bill who use to run Warlord Games.  Haven't seen them since I went for the funeral of another friend of ours, Kevin, and we had a lot of catching up to do.

Colour me interested.  The trailer looks promising with them running with the idea of the consequences from the timeline changing.