The Battle of Tomorrow AKA Warriors of Future


Caught this YouTube trailer. The Chinese look to be doing their version of All You Need is Kill aka Edge of Tomorrow or Live. Die. Repeat. It may well be derivative, but it still looks awesome.

Over here you can read what I said about the Tom Cruise film and the book it was based on, and the review of the film here.

The title according to Google translate is The Battle of Tomorrow, the clip says Warriors of Future. Who knows if it will come out, let alone what it will be called if it does. 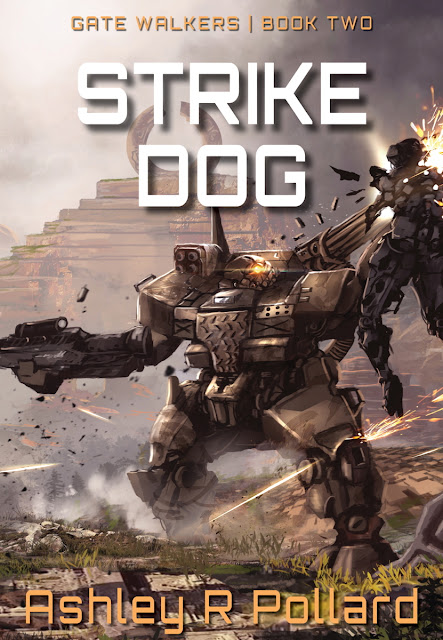 Strike Dog is available for pre-order.


Back here I presented a sketch showing what the Panzer Jager Mark One cybertank from The World of Drei looked like.

I found the above YouTube video by accident when doing some research on  the Soviet Obyekt 279 heavy MBT. I've also done a piece over on my writing blog. And you can find more pictures here too. 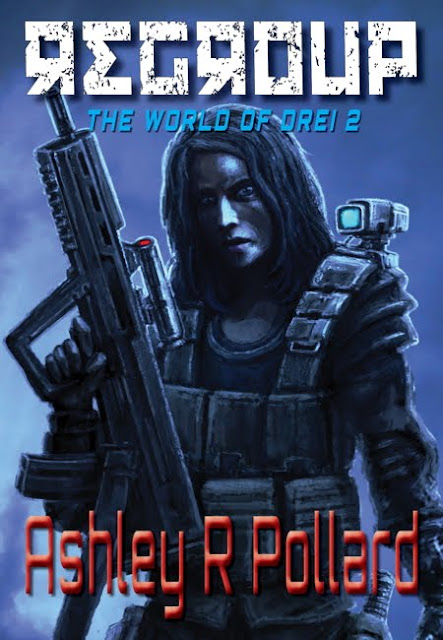 Now ready for sale, Regroup the second story in The World of Drei series is now available.

Trapped behind enemy lines when the enemy overran their command post, Sergeant Volkova and the wounded Captain Lenkov face a march across a frozen land. With limited supplies, their situation is dire.

The second story of a future Russian civil war set in the World of Drei universe, "Regroup" tells the story of human courage against all odds.


Important Note: If you already have older copies in this series, I've updated the text and covers. If you wish to have the new version, go to your digital library, there you will see on the far right side of the screen, opposite books that have been updated, a button that says "Newer version available."

I'm not going to cover the whole debacle of Harmony Gold, Palladium and or the fractious relationship Robotech from Harmony Gold had with BattleTech by FASA. You can read more about the recent furore about the Robotech KickStarter here on Sitzkrieg's site, which is well worth following if you're a mecha and Star Trek fan, and who isn't?

But, if you've been reading this blog for anytime, or have delved into the depths of my archive, you will know that I have  a thing about sizes of things.  Just check out my pieces comparing sizes of models here.

So, I wanted to add some observations on the problems of pleasing a fanbase, and trying to square the circle, to run out a well used cliché.

Size matters. The above illustration is from here.

The Robotech TV series was divided into three parts: The Macross Saga; The Masters; and The New Generation. Alternative titles being the First, Second and Third Robotech Wars. Harmony Gold put their show together by adapting three separate Japanese anime series.

The third show used to create Robotech was Genesis Climber MOSPEADA. My Japanese friends tell me that Mospeada was a Japlish portmanteau word, for most speed or more speed.

So the size of each shows mecha differed considerably, not only because of the choices made by Harmony Gold, but because the original Japanese creators didn't have in mind some unified 'verse for wargamers to move models of the mecha around, while making pew-pew noises.

For general information, the Japanese really didn't take into account the market outside of Japan back in the eighties. I'm not fully convinced they do now, but things have got better.

NB: Super Dimension Century Orguss, which was the second official thematic sequel to Super Dimension series, Harmony Gold was unable to use due to issues over rights, see here for more details.


This Visigoth tank from Dream Pod 9 is humongous, so much so that in my mind it better fits my 15mm Heavy Gear force than their 12mm line. It's so large it would have to be a giant Ogre style cybertank otherwise.

So, primed and first colour blocked out.

And, just so people can see how large this tank is, here it is with a squad of 15mm figures. 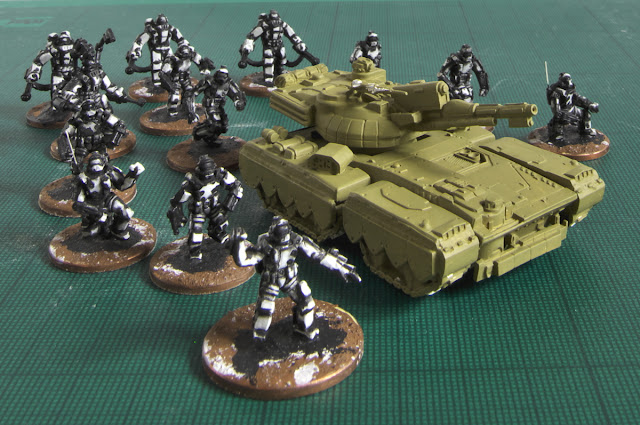