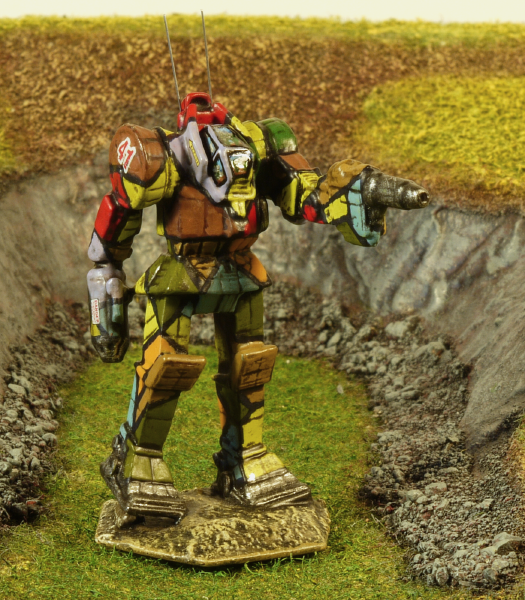 As part of getting back into doing regular updates on this blog, I've been going through all the old posts and deleting some photos, which some of my readers may have noticed? I've also been updating photos where I have better pictures too. Part of this is to make sure I don't over run my Blogger picture limit, though I have a Plan B for when I do. :-)

Anyway, to see the first House Steiner mechs I painted up go here, and when you come back you can see the new additions below.

The Zeus is  minor repose of the basic IWM miniature, done up in a variant of the dazzle camo seen on the four legged mechs I have shown previously. What I did was change the scheme slightly by adding a differential colour break between the upper and lower body. This was done by simply making the colours darker, or choosing an alternative colour. 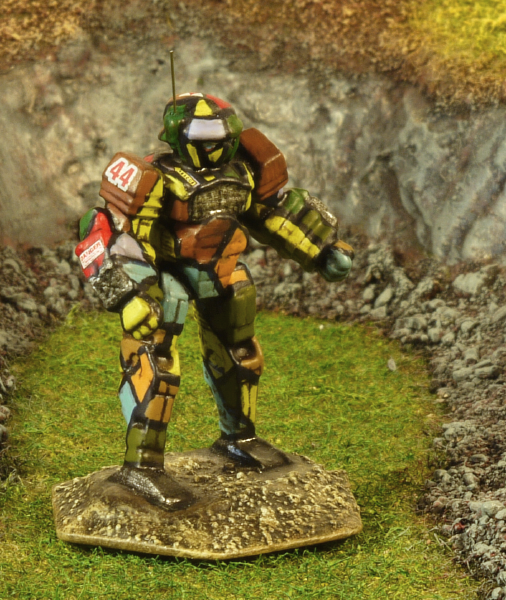 The Commando is just a straight out the blister pack model painted in the new scheme. My plan is that each lance will have its own variant of the dazzle camo, which will hopefully be recognisable as all being from the same school of thought, but subtly different enough to add interest to the unit.

As far as this blog goes, I'm not going to be using it for intensive photo essays, but more for talking about what I'm doing.

It's been a while since I posted an update on my Mummerset campaign, which has been down to the intrusion of Real Life (TM). To remind you all where we are see 1st Battle and 2nd Battle for South Boring, or review the whole campaign so far by going here.

Anyway, the last battle of the campaign had to be split into two games, one for each wing of the of the engagement. The first battle went very well for my players. The second was a bloodbath, and a draw of sorts, as both sides could claim victory for legitimate reasons.

The next game session was our usual RPG after action review and intelligence briefing.

Three of the four players battlemechs had taken damage, which meant that they would not have been in a good position if the enemy had the resources to have staged a counter attack.

Fortunately for the players this was not the case, so Dan didn't have to go out and face anyone without the benefit of having any armour on the cockpit of his Zeus. Susan's Scorpion though damaged, was combat ready, while Clive's Commando had come through unscathed.

The same could not be said for Trevor's Firestarter that was a total wreck, with the added problem of him taking two wounds in the process (calculated as a broken arm and leg with him recovering from being unconscious occurring during the session as we got updates from the field hospital medics).

On the up side the players had manged to capture an Awesome, with no armour to speak of, but otherwise fixable, and a Blackjack that was shot up and missing an arm. The third enemy mech, a Hornet, was really only good for spares that could be salvaged off it, as it had both legs blown off it after being shot up by Dan's Zeus.

The first order was to secure the battle area and retrieve personnel and material, and then to consolidate the defensive positions as best they could.

Afterwards the players had to list the repair priorities for the unit.

They decided  that getting the Zeus combat worthy was the first order of business, followed by the Scorpion. Due to diplomatic demands from their ally General Whales, the Awesome also need to be be repaired and given over to him, so as to bolster his force of industrial mechs.

After that, then the Blackjack would also be fixed up and given to him, which meant that the Firestarter was going to be the last in line for TLC.

This kept them busy for most of a day (in game time).

We then forwarded the campaign by four days, describing the what happened to their dropship the Northern Lights, the retreat of General Spencer's Republican Guard back to Clear Water Boring, and the arrival of General Whales' convoy at South Boring, bringing much needed men and material.

We then played out the propaganda part of the game, with the Democratic Republic of Mummerset making the most of the virtual destruction of the Firestarter from forces under the command Major Alexander Mercia who then was publically promoted to Lt. Colonel for his efforts.

Arriving in system were a House Steiner jumpship, and the dropship arrived on Mummerset at about the same time as the Awesome was finished being refitted.

The good news was that there were two Goliath battlemechs and four more platoons of infantry. The bad news was that the mech pilots were rookies, and there was no organic transport assets for the infantry, who would therefore have to rely on what was already available.

As things unfolded, more evidence came that the Freedom Army of Mummerset (FAOM) were operating out of Cromwell and that they appeared to have links to the Circinus Federation.

The latter group were a former Word of Blake ally that were thought to have been eliminated when their homeworld was glassed by nukes during the Jihad, which is about fifty years ago as far as the campaign timeline goes (this was a bit like finding Nazis operating out of a secret Antarctic base today).

Also, due to House Steiner's success at propping up General Whales' Royalist faction, the Marion Hegemony and Rimworld Coalition were now both supporting the Republican Guard, with six unarmed industrial mechs being seen with the one remaining Firefly that didn't see action due to being out of service.

Over the next three weeks of campaign time, the players sent special forces teams to recon Clear Water Boring and Cromwell, gaining valuable intelligence in the process.

The Democratic Republic of Mummerset was mounting a fierce propaganda campaign to bolster support for their regime, Meanwhile, the Mummerset Freedom Party came up with the catchy slogan of "Born in the South to die in the North."

Leading the players to decide that they were a bit unstable, and could not be negotiated with in any meaningful way.

The session ended with the players finding out from their Combat Engineers (one of the new platoons that had arrived as reinforcements) that the spaceport facilities at Landfall had been extensively mined, and that there was evidence that this mining was a focused strategy on the part of the Southern Federation and FAOM.

As a result security around the players dropship was stepped up, as it would appear that the enemy are making this one of their prime targets.

Finally, Counter Insurgency Operations began on the Fork River Basin, which is just West of South Boring, against FAOM forces infiltrating the area. This appears to be part of preparations for a big offensive.

This concluded the session, with the game now at week 59, for what was initially touted as a short three month Fly-the-Flag operation.

Is to make it look as if they will take off with the battlemechs in their dropship when the enemy jumpship is next due to arrive in system, thereby appearing to repeat their tactics of keeping the mechs as a mobile force that can be dropped anywhere as necessary.

The players suspect that the enemies plan is to lure their dropship to the spaceport at Landfall and destroy it with mines, or failing that use their dropship to play a game of cat-and-mouse, figuring that this would remove the Steiner battlemechs from the ground engagement as they would be unable to be deployed in time.

Therefore, the players plan to hide their mechs in hidden prepared positions to mask them from being scanned, and wait for the attack by FAoM against General Whales' forces that are in South Boring.