This weekend was of course the fiftieth anniversary of Dr. Who, with The Day of the Doctor being seen in something like 94 countries and umpty-ump number of cinemas around the globe.  I wrote about what I thought of the episode here.  This is me now writing about the experience of watching Dr. Who for the rest of the weekend.

We were sucked into watching the after show party that interviewed the actors and had loads of the old companions in attendance.  It was mindless fun.  A mere bagatelle of fluffy cotton candy, but we were in the mood for it.  Following that we watched an introduction to the monsters, Doctors and their companions, which was also light and fluff, but triggered waves of nostalgia.  So that was Saturday night gone.

Sunday we tracked down the documentary on iPlayer, of An Adventure in Space and Time having missed the Thursday night transmission.  It was wonderful and the ending was an emotional kick that made me cry.  I can't recommend this too highly, well worth watching.  After that we watched The Five (ish) Doctors, which was a wonderful spoof documentary about the previous actors who have played the Doctor wanting to be in the fiftieth anniversary show.  Very tongue in cheek and funny.  Then we rewatched The Day of the Doctor and both agreed it stood up to being watched a second time.

I'm not a fanatic of Dr. Who, for definitions of fanatic that mean I probably look like one to most non SF fans, in that I talk like one, can be a bit obsessive about the Daleks, and I have a deep fondness for the show, with many happy memories of watching it on TV.  So my favourite Doctor is usually the current one until I get fed up with them, but there are several I never became fed up watching.  William Hartnell, Patrick Toughton, Sylvester McCoy, Paul McGann, Chistopher Eccleston and John Hurt.  My favourite companions start with Jo Grant, Sarah Jane, Leela and Ace, Rose, Donna and Amy.  These are my favourites for the things they brought to the screen that I admired.  Monsters, well the Daleks, Cybermen, Ice Warriors and the Silurians.

Favourite episode, far too many to mention, but pretty much multiple stories from every incarnation of the Doctor.  So I say I'm not a fanatic, but as I said that very much depends on one's definition. 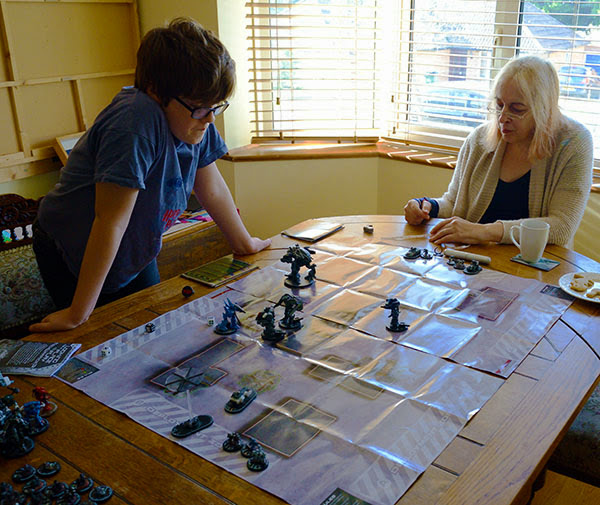 Last weekend I visited my godson and his sister and played another game of MechWarrior, which is relatively easy to pick up and play even if one has not played for a while.

Compare to the two previous times the biggest change is in my godson who is now elven, nearly twelve and growing up.  These are the things that happy memories are made of. 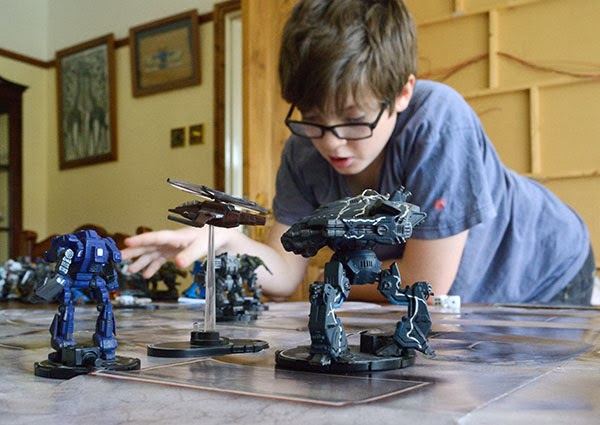 Compare the above shots to these, here and here.  Oh yes, I've gone blond in my old age. 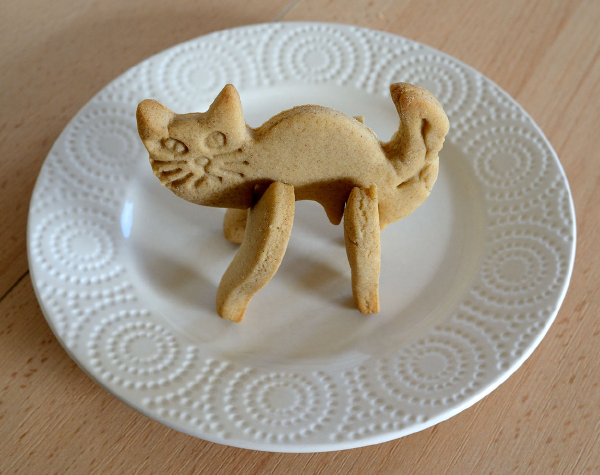