It has been quite some time since I posted anything about my Too Fat Lardies games Through the Mud and the Blood WW1 project, which I started in a fit of enthusiasm, but then I lost sight of the models, and as a result progress ground to a halt. As a metaphor for WW1 this is very fitting. Well, except that in this case "lost sight" was only in the sense that they were sitting on the shelf waiting to be painted and I did nothing with them. Well Saturday I was inspired to get them out and start working on them again (I know I was distracted from working on my Spirit of Steiner force, but as I have said before, I'm like a butterfly who flutters from one thing to the next).

I realised that I wasn't totally happy with the way my British Tommies had turned out, as I had tonally transposed the uniform and webbing colours. So I set about rectifying this by an application of Games Workshop's Thraka green wash that did a good job of correcting this problem. However, while that corrected the uniform I still had to repaint the webbing. I've started on this used Catachan green for the dark tone, and will probably use a light khaki for the highlight on the webbing.

Of course once I started repainting the core of my first company I just had to look at the remaining infantry and work out what figures I needed to complete the formation. Fortunately, I had actually bought most of the necessary figures some time ago, but I had just slipped them into a shoebox until such time as I felt ready to continue painting up my British force again. Another out of sight, out of mind moment. Anyway the above picture shows the core of the four platoons my British company will have, the actual formation will be organised as follows:

I intend to field four platoons and as you can see from the picture, add a mortar and HMG sections, with an artillery battery for support. Additional forces will include a troop of cavalry, some Whippet tanks, and of course the iconic MkIV and MkV tanks.

If my Tommies were a little unloved, my Germans were languishing even more from a lack of attention. So I got my notebook out and started sorting out the figures to complete my late war German company.

The company will consist of five platoons, or zugs as they were called by the Germans. Being this is a late war force I'm basing my formation on one that is cited in Too Fat Lardies games Through the Mud and the Blood rules.

Supporting the kampfzuge will be three squads of stossgruppe (stormtroopers).  Two squads will have eight riflemen, while one squad will have ten men with two LMGs. As I like vehicles and want tanks for the Germans too, I will also add an assault stossgruppe consisting of one eight man  bomber squad and an eight man pioneer squad with two, two man flame thrower teams to support the AFV7 and other captured tanks I intend to field when using this force in the offensive role.

Compared to the British company organisation, the German force just did my head in as I worked through it. Probably down to the names and the fact that the organisation was left to local commanders discression, which results in very mission orientated task organisation, but by the late war the Germans were struggling to hold the line, so it all looks a little ad hoc.

Another thing I've noticed is that the organisations here are very telling about the psychology of the factions and the inherent prejudices that both had about what made for good operational doctrine. Ultimately wars are won through logistics, not tactics and WW1 was a good predictor of the outcome for WW2, though that is largely down to 20:20 hindsight on my part.
Posted by  Ashley at 14:35 1 comment:


I thought it might be useful to reprise the evolving task organisation that my players have come up with. Delta battalion's HQ & HQ company has the following:


1 HQ AFV and 1 light utility vehicle, which is pretty much the minimum, but in keeping with the lean, mean fighting machine from post Jihad scarcity.

Most of this is down to what models I have to hand, and the desire to limit the players as much as possible to following a combined arms route for the campaign.

I'm using a lot of Mechwarrior vehicles as well as infantry to make up this force, as I've been converted to the idea of using 10mm infantry with standard Battletech mechs, which are supposedly 1/300th scale, but are larger than scale. I like the fact that using 10mm infantry makes the mechs look smaller, and to me more "real", or at least real to the descriptions in the novels and sourcebooks where they are describes as ranging from 30 to 40 feet high.


Armor Company: 2 platoons (with 4 AFVs each)

Battle Armor Company (Infantry): 2 platoons (with 4 Squads of 4 BA in each)

Infantry Company (Infantry): 4 platoons (with 4 squads of 7 foot infantry in each)

I've been painting up the battle armour platoons, but this has been a case of two steps forward and one step back. I got them done, but I hadn't cleaned the flashing off them sufficiently so in my eyes they looked rough. I then spent a couple of sessions on the work bench filing off the flash, resulting in the need to re-prime them black etc. However, I've now started painting them again, and with a bit of luck they will be ready in time for the next game session.

I'm using the Mechwarrior Skadia and Cardinal VTOLs, but it is highly unlikely that I will be able to get them repainted in time for the next game. I'm very taken by the looks of these models, which bear a striking resemblance to the VTOLs in Avatar, but of course predate the film by several years. 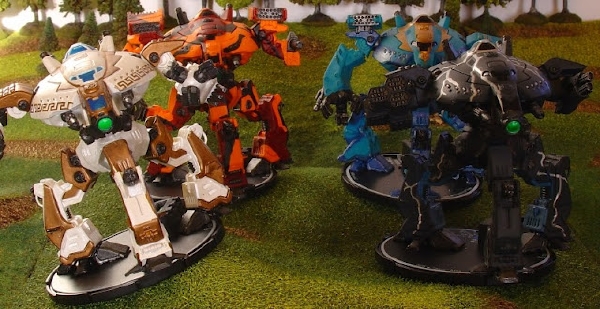 Usually when I put up a picture, like these MechWarrior Colossus Class mechs, I tend to chat about the models, which I will, but this time I will also be going off on a tangent. So no change there then I hear you all say!

For the Classic Battletech  players these models epitomise all that was wrong about MechWarrior. First they are tripods and how silly is that? Second it was just another example of how Whiz Kids were just running roughshod over all that was sacred in Battletech by breaking the construction rules. Third, MechWarrior was a game with stupid clicky bases and silly rules.

Anyway Whiz Kids produced four variants of the Colossus class mechs. My two favourites were the the blue Poseidon and orange and red Ares variants. I especially like the Ares, as the colour scheme really appeals to me, maybe  because it looks like camo for a hot dessert environment (sic after the event obviously one with jam and orange in it)? Anyway, I stole the idea and modified it slightly as the basis for my Republic of the Sphere units BattleTech scale mechs I've painted, which will no doubt get a blog entry of their own in due course.

Anyway, I liked the Ares so much I decided I would have to make a BattleTech scale one, and I've been working on scratch building one for a while now. The trouble is time. I, like everyone else, am really busy everyday that ends in a Y, and I have so much to work on in my spare time that there really isn't enough hours in the day to do everything I want. 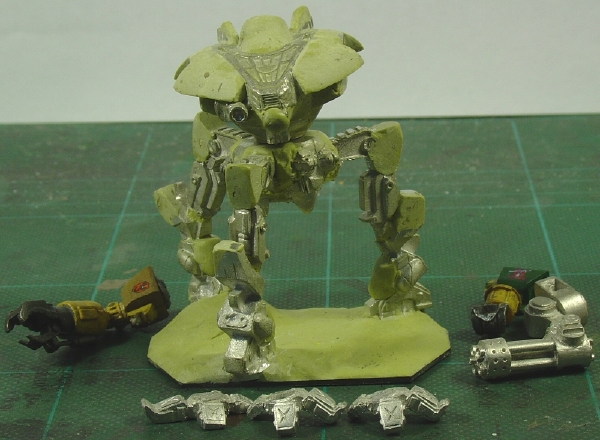 So I like everyone else tends to prioritise what has to be done, or needs to be done first. In this case making and painting models for my Operation Sandbox campaign. However, as I mentioned previously, during the first game we talked about the Colossus mechs as part of the game, and this happened because I had my model of this mech on my work bench.