Bring it on. Anyone who doesn't think that the future has robots in it is sorely mistaken. I've lived with a love for robots ever since I was a child, and now the science, material technology, and engineering have come together.

Now all we need to do is start making them large enough to ride on, or ride in, and mecha will a thing. 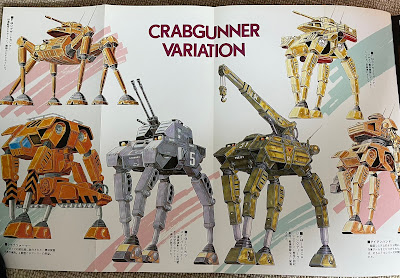 A month has flown by, and I'm genuinely bemused at my inability to have generated new posts, given how much painting I've been doing. But nothing has quite gelled into a finished model to show.

So here's a post with some book and manga suggestions for those readers who may be in need of some mecha reading.

Hardfought (1983) by Greg Bear
Cloned, energy-exosuited soldiers fight aliens, but human identity is the main casualty. On my to be read list.

Great Sky River (1987) by Gregory Benford
Post-apocalypse nomads in battlesuits fight to survive against alien robots. On my to be read list.

Rimrunners (1989) by C. J. Cherryh
After the Company War ends, a battlesuit trooper finds herself trapped, incognito, among civilians on the other side. One of my favourite books with power armour.

Warstrider Series (1994) by William H. Keith
Exotic aliens and “realistic” mecha that transform via nanotechnology. This is an early series from Keith after his BattleTech Gray Death series, which has a lot going on it that makes him one of my favourite authors.

The War for Eternity (1983) by Chris Rowley
Ursoid aliens and their human allies fight power-armored space marines. On my to be read list.

Legacy (1995) by Steve White
Human marines in well described powered armor fight to liberate an alien world. Recommended to me.

Appleseed  (Manga) by Masamune Shirow
Battlesuited cops, cyborgs and terrorists clash in a realistic cyberpunk future. I love my treasured old copy I have.

Metal Skin Panic Madox 01 (Animeigo)
An ordinaryJoe finds a secret battlesuit – now the military wants it back. This is worth watching for the power armour design. Recommended, though good luck finding a copy, but you can watch it here.