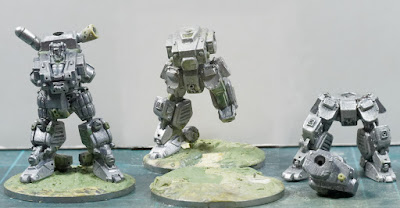 Here's the current work in progress shots. Close-ups of the sculpting and pinning done to the middle and right hand mechs above.

I've not yet finished the right knee on the running mech, and I've only just started cutting and pinning of the other mech on the right; also showing the pins for the base.

Casting is still a case of practicing with molds and the sculpting mix to get good, clean casts, which is still eluding me. 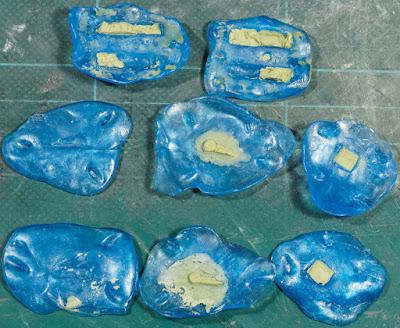 As you can see above, I mucked up the canvas rolls, which broke when I split the mold. Not sure what I did wrong here as the other pieces were okay.

So that's all for this post. Catch you all on the bounce. 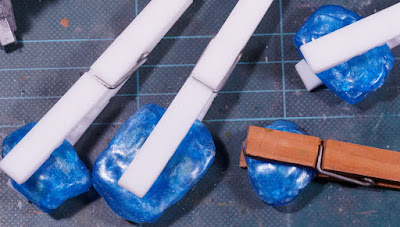 Oyumaru reusable thermoplastic, the blue stuff, is a pretty useful tool for those who want to replicate parts that are no longer available. Strictly speaking, my casting old RAFM parts skirts perilously close to piracy, except for the whole not available for 20+ years thing of a long defunct product.

BTW: If the owner of the RAFM original masters wants me to pay, or can supply me with castings, then I'd be happy to oblige. 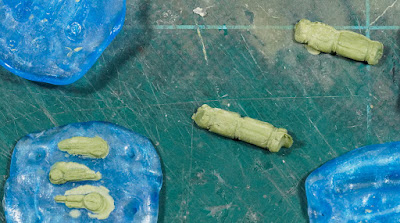 So I cast a few bits & pieces, more as a way to experiment with the thermoplastic. It's a yes, no, and maybe on the results.

The tiny antennae, above left, were mostly unusable. The canvas rolls were fine. I'm going to experiment more with the mixture of the putty. Pure Kneadite is too flexible. Milliput seems okay, so far. A mixture of both is a bit hit and miss.

It's a toughness versus detail choice.

Anyway, I cast a sole from another model for the reposed leg of one of my work's in progress, because the bottom of the foot is noticeably bare of detail. You can clearly see where I am with the repose.

I'm having to build the joint and beef up detail on the casting that was worn/damaged/miscast.

And I had to go back and redo the exhaust on the other conversion I'm working on. 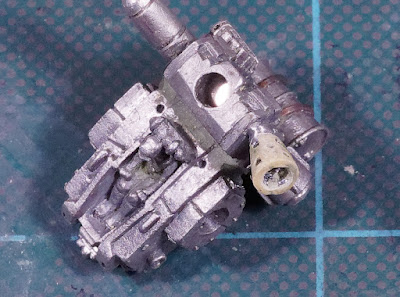 And I really pulled the boat out on the feet by taking the time to articulate the ankle, which will allow me to make an otherwise static pose look a bit more dynamic with the foot adjusting to irregularities in the ground. 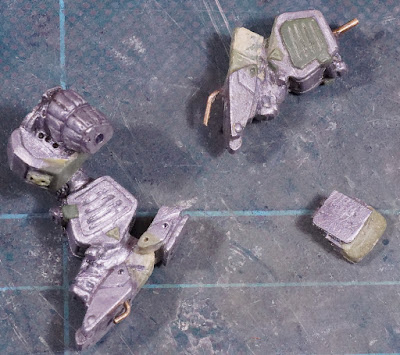 That's all for now, because it's my birthday, and I have things to do... 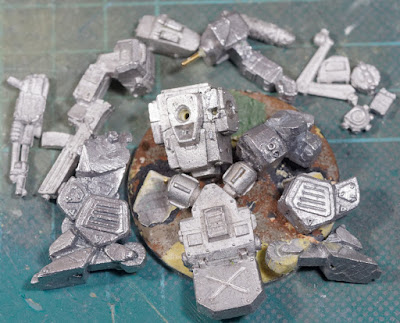 While letting the putty on the other conversion cure, I've been working on the next conversion, a new build. Above is a Hunter I've cut apart to repose.

As I got a bit further along, I realized that the way I had parted the hips, to try and save some detail on the right leg wasn't going to work. Not because of the angle of the cut or anything, but because the leg casting I had chosen to use is one of two variants, and the angle of the legs was better on the other variant 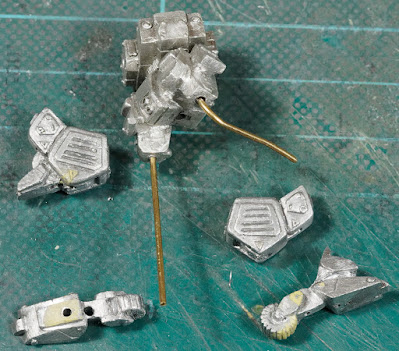 Given I have more legs spare than parts that be assembled into complete models, it seemed easier to start again.Given the model will be standing on one leg, I drilled right the way through the legs so that I could have a substantial brass rod to keep the whole assembly solid.

I then used the running Jager from the Azure Devils pack to guide the bending of the brass rod my repose. 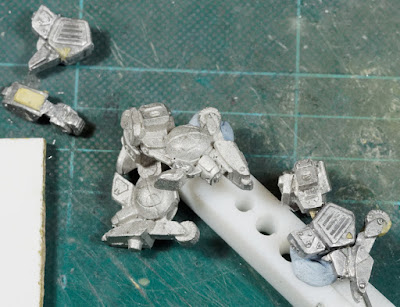 And as you can see things are looking promising. I actually have to bend the other rod quite a bit more than I thought I would need to to get the pose right. 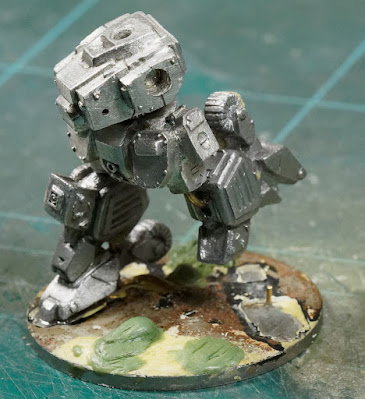 Here it is balanced in place to check out the pose looked good.

Time to get the Kneadite and Milliput out. I find Kneadite is not as easy to file as Milliput, but Milliput can be a bit harder to sculpt with. So I mix about two thirds Kneadite to one third Milliput together.

The mix results in a less sticky putty, which can be easily shaped, and when cured can be filed.

So, on that note, it's onward to work on the my other combat armor conversion.

Stripped and Rebuilding to Magnetize

Onward, ever onward, I'm prepping the next batch of combat armour mechs. Yes, for those who ask, this one is a rebuild that I had painted and near completion, but I stripped it because the magnetize everything bug has hit me. I'm sorry, I just can't help it.

Besides, I have learnt so much over the last year of doing these that I'm bringing ideas to fruition that I would never have bothered with before.

And as you can see, I've changed my mind and decided that the open cockpit showing the pilot. This will also clue viewers about the size of my combat armor, and the whole Real-Robo mecha genre. 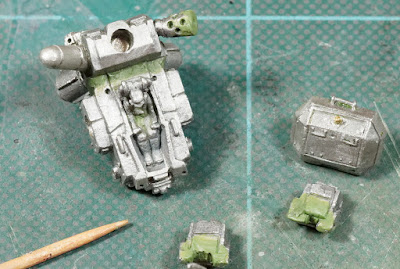 Besides, as I like to remind myself, it's much easier to commission artists to do covers that convey the size of the machines they're illustrating, made easier if you can give them good pictures to work from. 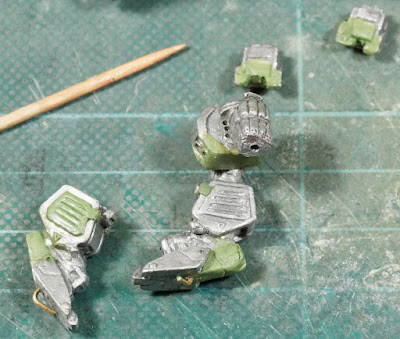 I'm not just magnetizing the torso, head, and arms to increase poseability for photographs, but also sculpting parts to restore some depth lost when the casting process from damage to molds, or poor metal flow etc. making the end result less sharp looking than it could be.

That's all for now, catch you all on the bounce.