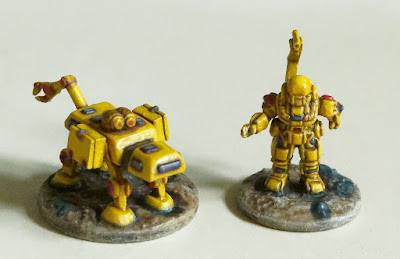 Three 15mm robots off the workbench ready to be varnished.

The android and Big Dog is the robot explorer team Alpha Echo Romeo Tango Two. The second team sent by the Magnetic Anomaly Project that got lost in the Pillar network, as mentioned in my novel Strike Dog.

And below is a commercial robot loader. 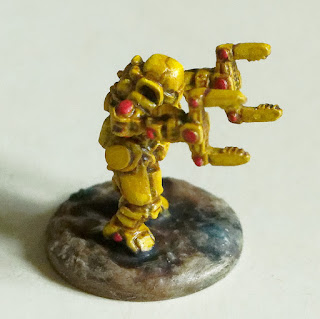 That's as much as I've managed to finish, though my two Ape combat armor suits are nearing completion. Just in the process of paneling with a pin wash and weathering.

Progress on everything has ground to a halt for the reason that I made the decision to take the rules to places I hadn't thought of after doing some research on the rules currently out on the market. And there are a lot of very good rules on the market covering near future warfare with or without mechs.

Having read a few I thought that there was something missing that would make mine standout as offering something different.

I recall that while I wrote the first draft of OHMU War Machine in a month, it took much longer to play-test and fix wonky rules. And even then we still had to do a FAQ to clarify some parts and and errata sheet for all the missing words and typos that got through the editing process.

So it is what it is. Given my funk I've done good.

Therefore the rules must be able to keep both players interested where asymmetrical warfare means one side is outmatched by the other. Not just Vietnam in space, but something truly science fictional with alien aliens.

If only because that while I haven't introduced technological aliens into my universes setting (yet), it seems to me that the key to having interesting games between human forces facing an alien race whose technology is far superior is the key to science fictionally interesting games.

The problem is how the rules allow players to enjoy the experience of being outmatched in one area is balanced by game mechanics that still allow for a victory? I'm doing my homework by researching all the rules that have attempted this.

And just to remind readers, I will also be stealing the best ideas for solo play/group against the game mechanics running the opposition rules too.

It's a tall order, but I'm having fun, which is the important part, right?