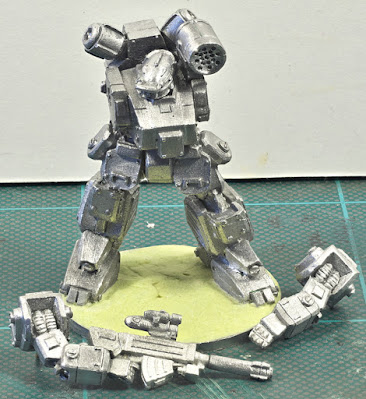 As you can see this is the first Gear I've gone off piste by converting the medium autocannon using a contemporary Dream Pod 9 very light field gun as the basis of my conversion.  I hadn't imagined I would do any conversions on these old models, but the weapon on the Jaguar, when compared to the light autocannons on the Hunters, just didn't look beefy enough to justify being called a medium autocannon.

This is probably my inner wargamer coming out; bigger is better and that kind of thing.  Please feel free to criticize and throw brick-bats or praise.

Still, I don't think I went overboard with the conversion and I've incorporated parts from the original casting into my piece. This is now going off to the paint shop to be primed with the other two Hunters ready to be painted to match the Hunter Commando.

NB:  Yesterday a mad man killed people in London before being killed himself by the Police. By the time I heard about the event, it was all over.  It's sad, but it's not the end of the world, even though a handful of people lost their lives. The biggest enemy is the generation of fear, because when people are fearful their cognitive abilities are reduced by the overwhelming emotion. Oh, and just in case you think I'm being cool and rational because I wasn't there, I work for the hospital on the other side of the river from the House.