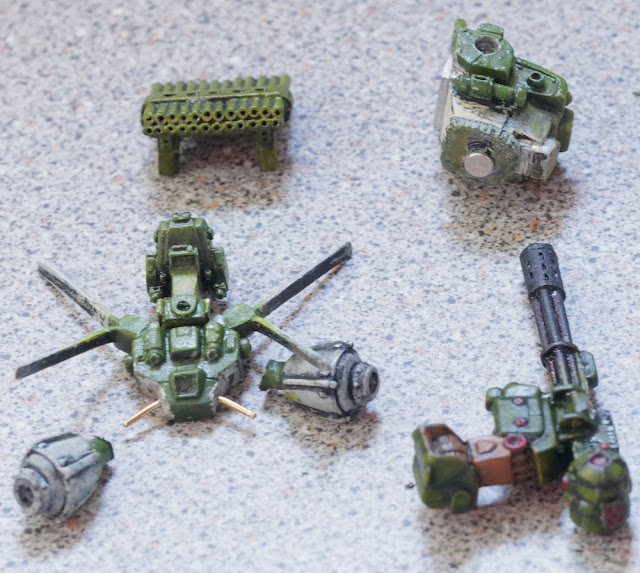 I started painting my Buster and during the process I checked the fit of the arm with the rotary cannon and... you guessed, it now fouled with with the backpack engines. Doh!

So I pulled the backpack off the torso, and in the process of doing so chipped some of the paint off.

Fixing this required remodeling, and so I'm back to square one; only to discover that the missile pack would no longer fit after repositioning the engine cylinders.

I tried hanging the missile pack off the roll bar, but my first attempt broke, as the part was load bearing. So I thought things through and made a replacement that wouldn't break.

And here we are, back at square one.

I know. There, there. How sad. Never mind.

Fingers crossed everything goes well from here on. The setbacks with trying new techniques has some bright spots, in that I've learnt a hell of a lot about painting glazes, and what I have to do to achieve a finish that resists wear and tear.

So now it's back to painting. Catch you all on the bounce.

Acquisitions of a VOTOMS Kind

It is no secret that I like the anime show Armored Trooper VOTOMS. It has become my favorite source for mecha inspiration. So much so that I wrote three novels that feature mecha inspired by the franchise. I also own  a bunch of Takara 1/144th scale VOTOMS, a 1/35th model, and an enormous 1/12th toy Scopedog in my collection.

While I had a plan to play wargames with the 1/144th models, the availability of more models, especially the enemy Fattys proved a stumbling block.

That led me to discovering Dream Pod 9s Heavy Gear range, and I got a bunch of models from them, but the choices available for 12mm infantry doesn't allow for what I consider a satisfactory representation of the power armor suits.

The Arctic Gear range are nice models, but generally very pricey. However, I've been lucky and managed to score a Reeman squad box set, at a bargain price. So now I can make a squad of four Scopedogs.

As you can see they're partially assembled, but there's a big pile of parts to be added to complete them.

By comparison the Burglary Dog variant I featured before that provides alternative variant parts for the legs, and needs more assembling to ready it for the tabletop.

And just for completeness, here's the above models extra parts.

When I'll get around to assembling these beauties is moot. Currently I'm deep into my RAFM conversions, which has turned into a sorry tale of missteps that have led to a shed ton of extra work. But I'll write about that more next time.

Until then, remain well, stay safe, and catch you all on the bounce.