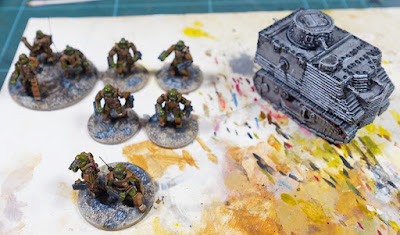 This last week I have been busy writing Big Little Wars. Roaring along with 3,250 new words added to the running total of 28,456 words. But still a fair bit to do.

The Scenarios are the next big job ahead of me.

Meanwhile, lurking on my workbench is an ABS filament print of a Bob Semple WW2 tank that I'm making into an insurgent improvised armoured fighting vehicle. Wants to be a tank when it grows up. Not happy with it yet, but I will prevail.

I bought some liquid Green Stuff to smooth out the printing ridges. After that, I'll tart up the barrel and maybe add a TOW missile or some thing to jazz up the model. 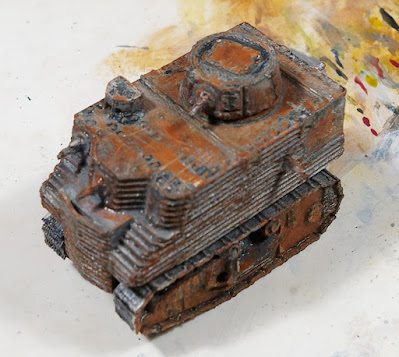 Spent a long time procrastinating on how I wanted to base them, and another long period of neglect as I painted other models. But they are nearly finished. In the home stretch with one more glaze and some some drybrushing to finish these.

So that's all until next time. Catch you all on the bounce.

The Jungle: The Mighty Jungle 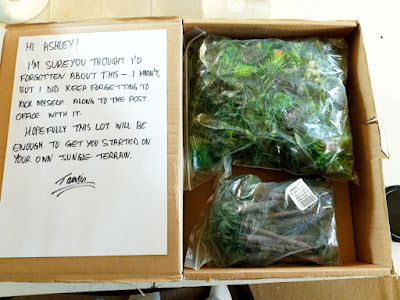 As you can see, I received a very generous package of jungle terrain arrived from my dear friend Tamsin; a wargame sister of battle whose blog can be found here, or in my blog list in the left column here.

She had been building some mighty fine jungle terrain on her blog a while back, and impressed, I commented on her work. To my surprise and delight, Tamsin then offered me the surplus trees as a gift, which I was truly flattered to be offered, and grateful to receive.

The box of trees arrive yesterday.

I took a quick photo, but I was too busy until today to post it. Sorry for not emailing you immediately Tamsin, but I was busy, more like lost in writing my Big Little Wars rules, managing to add a mammoth 2,069 words to the project. Not yet finished, but closer to reaching that goal.

I see a jungle, a mighty jungle in my future. Thank you again Tamsin.

To all my readers, stay safe. Catch you all on the bounce. 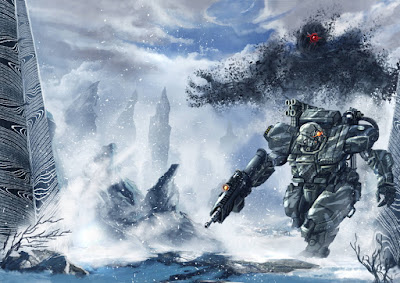 A progress report that is more than just there has been progress. I've set a goal of completing the first daft by Christmas. So I sat down and made a priority list of what I needed to do to finish to be able to send the first draft out the door to my play test team.

The picture shows the progress made and the word counts.

My document tells me that the current word total is: 19,677 words; though the project counter only says 19,401 words. No doubt there are good reasons for this, but I haven't a clue why they differ?

This project has completely sidetracked my work on my next novel, but doing this has involved me thinking about a lot of stuff that counts as world building stuff I will need to know for later stories. I'll take that as a win.

That's it. Catch you all later.