Here's a series of pictures showing where I've got with  painting this set of models. Above is my running CASE-2XC Mod 2 command Dog.

Below is the rebuild of my CAS-1-Mod-1 Ape that I previously painted, but wasn't happy with. Quelle surprise.

And because I want enough Dogs to form a squad the second basic CASE-2X combat armor suit that will bring my current model count up to three. 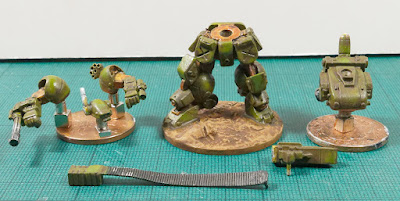 My bunch of combat androids is coming along nicely too. Twelve to accompany Ferretti's Buster, or two groups of eight for squads. 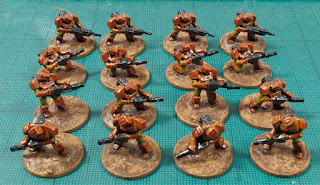 And finally, my Toyota Technical conversion of the Peter Pig two door pick up into a four door crew cab variant. 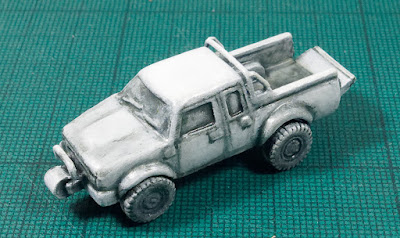 I managed to get a white finish that I can live with, I think. I've already stripped this model back to metal twice, but part of me that now I've mastered how to shade white that perhaps I should strip it again and get a better finish. 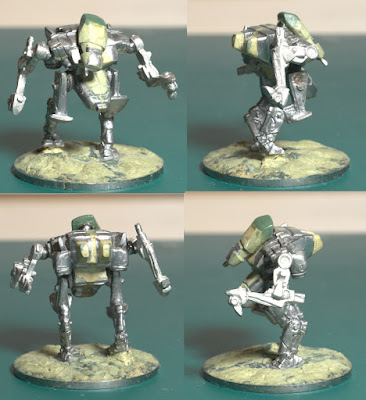 My District 9 exosuit inspiration for the Subatduku combat armor still remains a work in progress. It has taken me longer than I anticipated to finish the sculpt largely because I keep making changes and modifications to tweek the design, see here.

I know that is just so me.

The head required a rethink, but it now swivels nicely. The arms are a pair of repurposed legs from my battletech box of spare parts. Still got to to change the ankle joints into hands, and some extra details to add to the legs too.

Also, this model is currently sidelined as I slap some paint on the mecha and combat androids I'm working on. Still, it is good.

Finally, got another two combat armor mech suits ready for painting. Above is the running version of the CASE-2XC Mod 2 (backpack with two weapon mounts), and here it is broken down ready for primer. 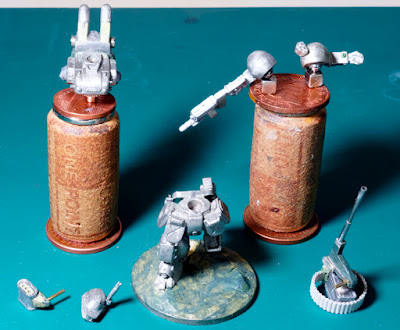 Below is my second standing CASE-2X Mod 1 pose completed.

And below broken down ready for primer. 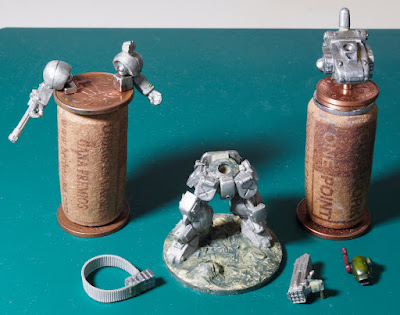 And for those who remember the CAS-1-Mod-1 Army construction combat armor mech suit has been tidied up and is also transferred to the paint shop.