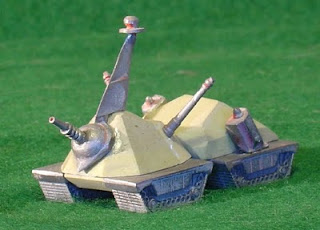 Remember the above from here.  It's my unfinished sculpt of the Ogre Ninja.  There are lots of reasons, some good, some pretty lame why this little beauty has not been finished.  One reason is that an official miniature is now available from SJG.  The other is the amount of work required to finish it that I could spent doing other things.

I've made a decision to finish it, but not as a Ninja, but as a Mark-2 Scout variant based on some stats from Henry Cobb's page here.  Henry has to be one of the leading lights on Ogre stats and has a lot of useful stuff on his web page.  Check it out.

Anyway to quote from here; "However if the Ninja was produced without the Missile Rack at first (until it was proven on the Mark-IV) and simply had the rest of its armament then it's load factor would be less than the Mark-V. And then you could assume that stealth was also in development until 2087 or so. The cost for this Ninja-Minus would only be 74 VPs (2 missiles in tubes, 1 MB, 2 SB, 8 AP, 5 treads per hex times 4 hexes of move) and it could have been seen as a scout replacement for the Mark-II until the stealth and rack technologies were available. Then when the Mark-IV was deployed, the Ninja was obsolete as a pure scout and so redeveloped with stealth and missile rack."

So that's what I'm going to do with this model, because it makes it unique.  Thinking about this has also made me start imagining a NAC Mark 1 variant that would stylistically be a better fit with the classic Winchell Chung designs, mostly down to the fact that I don't like the current Mark 1 & 2 models.  By that I means they are perfectly nice models, but they look more like Pan European mini-Fencers than precursors of the classic Mark 3 & 5 designs.  YMMV.

More thoughts and pictures in due course. 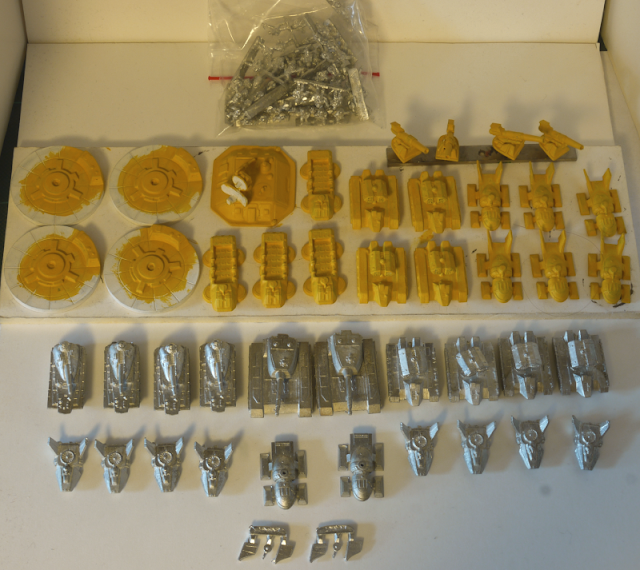 All it needs is frickin laser beams coming out of its eyes and the robot apocalypse can begin.