Size Comparison from Above 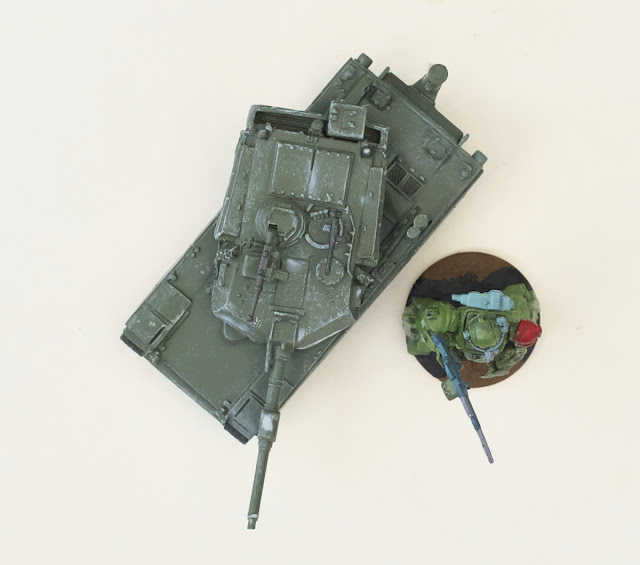 Back here I presented a manifesto for RealRobo.

In the comments, I was asked to take a shot from above. The days in London have largely been dull and overcast, but when the sun did come out I took the opportunity to take this shot. 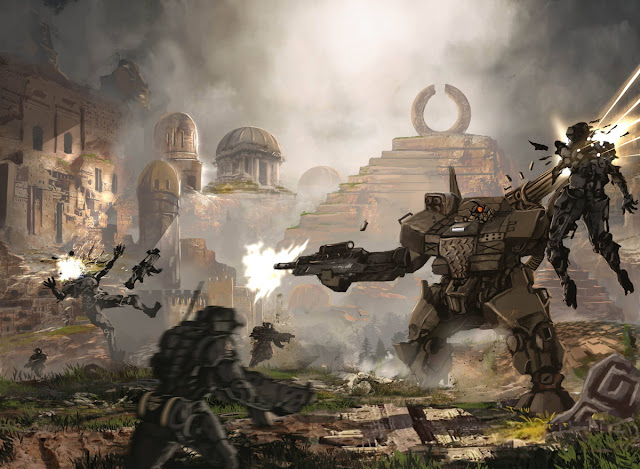 And the art for Strike Dog is here.

The novel has been copy edited and is now being fact checked by a Marine and a Corpsman for accuracy.

I have the best fans.

After I posted my last blog it raised a comment about sizes, with one person coming out with the informed opinion that tracked or wheeled vehicles were just smaller, period. Walking vehicles are, and would always be too large to ever be practical.

This is one of those areas where peoples opinions are informed by a wide range of media, where the representation of walking vehicles goes from the sublime to the extreme. Gundam mobile suits are at the sublime end of the largeness, while the Gunbuster suit is at the mind blowing extreme end.

However, there is Real Robo.

Mobile Suit Gundam: The 08th MS Team combat armour suits occupy the very big end of the Real Robo spectrum. The suits in Fang of the Sun Dougram are the size most people assume combat armour is. Dougram provided a large number of designs that were used in the BattleTech game, as did Super Dimension Fortress Macross aka Robotech. While Fang of the Sun Dougram remains one of my favourite anime shows, what inspired me to consider walking vehicles in a more serious light was Armored Trooper VOTOMS, which also has a TV Trope page.

The arguments all boil down to size. And size matters.

In the real world, smaller is better.

I can see how all of the above makes Real Robo a confusing hot mess of different concepts. I really do.

Especially, given that people watch the anime shows or play games with miniatures. The trouble is that wargame models are not to a scale, but made to a size. This distorts the proportions, and again leads to erroneous assumptions about the size of combat armour suits; Heavy Gear being one example of how the models are sculpted for the look on the table.

Fortunately, being crazy about Real Robo and VOTOMS, I have scale models by Takara of both the VOTOMS heroes combat armour suit, called a ScopeDog, and an Abrams tank. As you can see, the ScopeDog is taller than the tank. But, not by as much as one might have been led to believe.

To me, this is what I mean by Real Robo.

So, to be clear, Bad Dog is a  hard SF take on Real Robo. It takes the ideas of Armored Troopers VOTOMS, and turns up the hardness to eleven.

BTW: As promised, I took two pictures to show the difference when taking pictures in Hi-Res versus stacked images. The picture at the top was taken using the Hi-Res mode of my camera, the picture below was made using multiple exposures stacked together to form one image. Both models are on bases to equalize their heights off the ground.


At the moment it doesn't make much sense to build walking tanks, but in a science fiction novel I can make suppositions about the future. In the world of Bad Dog warfare has changed from the introduction of robotic combat vehicles, which dominate the battlefield. This YouTube video gives you an idea of the size of the combat armour suits I imagined for my novel Bad Dog.

And yes, I am a VOTOMS fan girl.

However, combat armour suits raise questions around doctrine, which is all about defining how the stuff the military has is used, and new equipment drive changes.

The military loves its clunky abbreviations, DOTMILPF-P spectrum being one of the longer ones I've come across while researching stuff for my novels and this piece. It stands for:

Phew, what a mouthful, and that's not something I say often.

In peace time, budgets for acquiring new technology drive the development of military doctrine. In war time the drive comes from countering the enemy's forces, but either way, doctrine seeks to provide a common conceptual framework for a military service by asking the following questions:


Who are we? How the Army, Navy, Air Force service perceives itself to be?
What do they do? What mission are they being called to carry out?
How do they do what they are being asked to do? How the mission is to carried out?
How did we do they do it in the past? How the mission has been carried out in history?
And of course, doctrine will also answer other things not covered by the above questions.

So, doctrine is neither operations nor tactics. Instead, it serves as a conceptual framework uniting all three levels of warfare covering operational, strategic, and tactical issues. These each have the following defined:


The fundamental principles.
Tactics, techniques, and procedures.
Terms and symbols.

Doctrine provides a guideline to the activities a unit undertakes, the actions expected of it, and describes how things are done, but does not prescribe what must be done. Which is a long preamble describing the process when one is creating a new type of unit for the military to use.

In this case, the questions that would have to be answered if combat armour suits were brought into service.

All rather dry reading. So let me leave you with this... 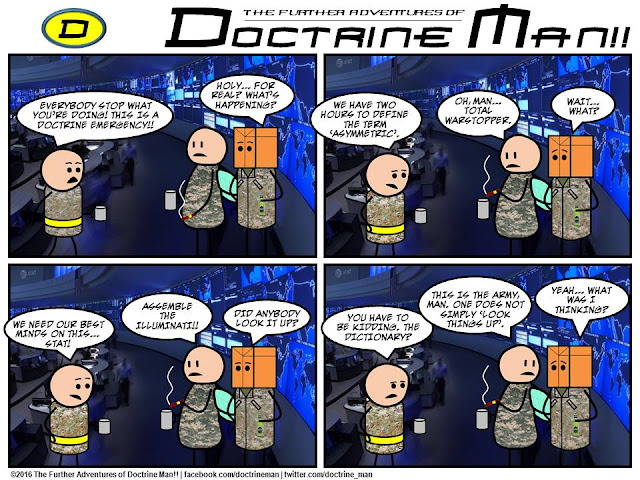 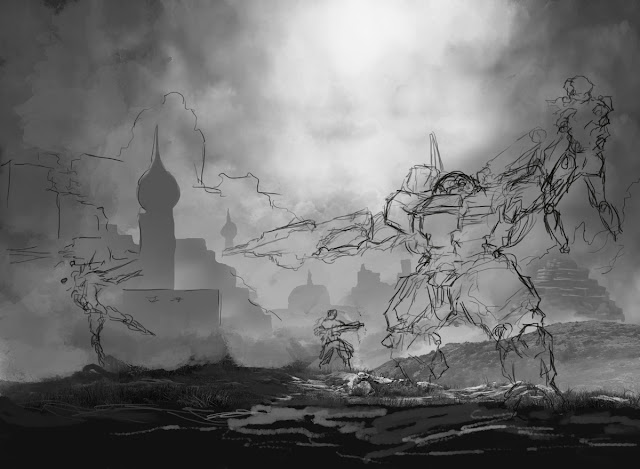 And here it is, the first sketch for the cover of Strike Dog.

This is a direct sequel to Bad Dog, as the character's journey carries on from the consequences of what happened at the end of the first book. Currently doing the final copy edits and proofing, then there's the covers typography to set up etc. I hope to have this out in end of February, beginning of March.

I'm still snowed under with the the proofs for the print version of Bad Dog, which I feel ought to be up before the sequel is released, because I know a lot of people still prefer print.

A Happy New Year to all my readers. May you find fulfillment in all your endeavours, however great or small.

This year sees for me the end of a two year period of working in the NHS. My contract has now ended, and it gives me the opportunity to focus on my goal cementing my goal of being a published author. I realize, on reflection, that time is the most precious commodity one has, and I'm driven to make the most of the time I have to achieve my goals.

I'm not one for making New Year resolutions, because I know that such things generally are counter productive, unless one is willing to make big changes and drive yourself hard. This year I want to commit myself to making changes and I'm prepared to drive myself hard to do so.

My first novel, Bad Dog, is out as an eBook, and by the end of the month I hope to have a paperback and hardcover versions for sale. Furthermore, the sequel, Strike Dog, will be available soon. Just got to commission a cover, oh and do all the niggly bits like typeset it, and stuff. But I know how to do it now, so it will be done. Then before the end of the year I will bring Ghost Dog to market.

But, while this means I will do less model making than I might like, it doesn't mean an end to my hobbies, because everyone needs a hobby. Back here I talked about getting a new camera, now I have my new lens, courtesy of my beloved, more about it on my other blog.

Above is a quick stack of 16 images I took on Christmas Day. And, I've taken away one lesson, with an ultra-wide angle lens one doesn't need to take more than half-a-dozen pictures to get everything in focus.

Wow. If you know anything about photography, that's definitely a thing!

So, I'm excited by this picture, because it combines two of my hobbies. Combining two hobbies is both satisfying and inspirational. My plan is to take a 40mb Hi-Res single image and a stack of 16mb images, of the same scene under better lighting, to compare the results from the two different two modes.

The reason being that doing one 40 mega-pixel shot would be quicker than taking multiple 16 mega-pixel pictures and stacking them into one image.

Exciting stuff! See you all on the bounce.