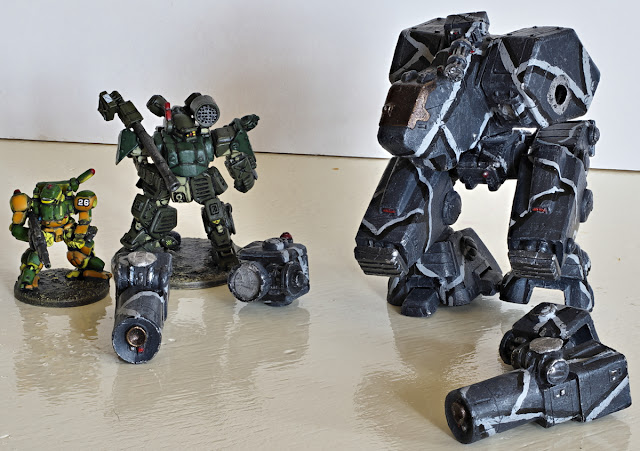 I'll admit that I've been searching the internet for RAFM Heavy Gear miniatures.  What can I say, wargaming and making models is my hobby.  I found a Mammoth Strider for sale on eBay that had a very small pictures and an incomplete description.

Questioning the retailer produced no useful data, but after checking out the picture and discussing it with friends, yay for friends, I decided that on the balance of evidence it was likely to be an old RAFM Mammoth.  So I took a punt, despite it costing the same as the new smaller version from Dream Pod 9.

It arrived today and the photograph is proof that this thing is humongous, and it weighs one pound 12 ounces, or 795 grams for those more familiar with metric measurements.  It's missing one of the small rotary cannons and the footpad, both of which I'll fabricate replacements for in due course.  First things first, strip the paint off in a nice bath of Nitromors.