I've been as busy as ever, or at least that what it feels like to me as the last 5 months have flown by. Some of that is down having been quite ill this year and off work, and the rest is probably down to getting back into the groove at work when I returned.

In the mean time I have been building terrain like there is no tomorrow.

This has been this years monumental project for me. I've now finished 20 boards, and have 4 that I need to modify as the facing on some of them are not square, which affects laying them out as they don't quite fit properly. One more board require some super detailing for a rock face that I haven't gotten around to yet. 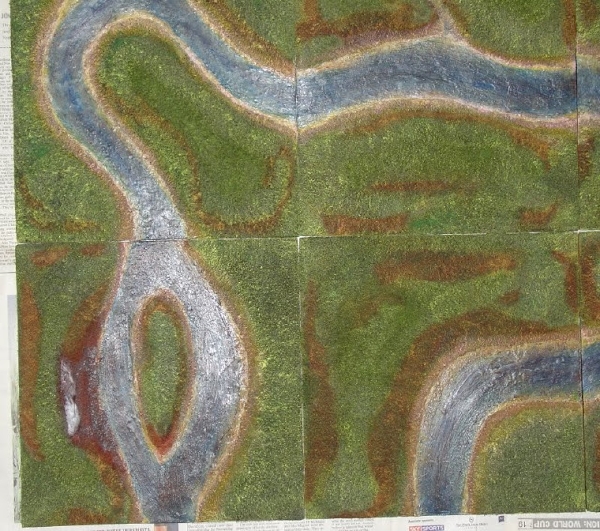 In the process of being built are 9 ridge line boards and 5 town boards, the latter not shown here. 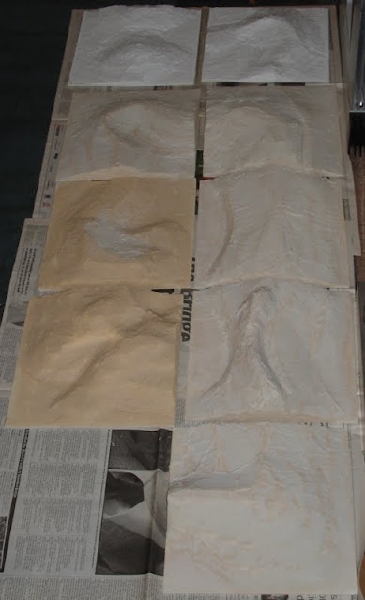 So I had quite a busy day on my day off. I also, spent some time drawing out more terrain combinations to make in future, so I kept busy and out of trouble.

I've just got back from a day our at the South East London War Games club annual show, which was canceled last year due to venue problems, but is now back.

Lots more information about the previous shows and the club on their site. Anyway, if you live within striking distance of London this show is well worth going to. Not as high profile as Salute, which is in the Excel Centre, but every bit as big with lots of stuff to see and do.

I took a friend's son, Oliver, with me, and he got to take home a Warhammer 40K box set for his Xmas present from me. Oliver also had a whale of a time playing Weird World War Two game featuring giant mecha, and got given a werewolf figure by the nice guys running the Westwind demo game for doing so well.

He enjoyed this so much he went on to play another game with them, playing the other side.

Oliver then went on to play a Russian Revolution aerial game and enjoyed himself with the nice crew who were running it from the South East Essex Military Society. The game was called Wot, no parachute, and Oliver played and really enjoyed trying to shoot down the enemy bomber. Actually it was nice to see quite a lot of youngsters at the show, and that they were being encouraged to join in the games, which can't be a bad thing.

I wish I had taken a camera, but I'm sure that the SELWG site will upload pictures of the day in due course. Hey no sooner said than done I found that Bob's site has photos.

No BattleTech stuff of note at the show, but I've already got plenty of unmade mechs in a box to paint on a rainy day, so that didn't bother me at all.

I bought some Peter Pig stuff for their AK47 Republic rule set. I was lucky to play in a demo game of AK47R, which was a hoot. We sort of won, I think, or least didn't loose too badly. The owner of Peter Pig Games ran the demo, and he was an absolute gem, showing patience and humour to help us newbies understand the rules.

I plan on doing a Somali based Black Hawk down inspired game using these rules, and after reading on Bob Cordery's site here:

I've been inspired to start thinking about doing some inter-war period games around the Spanish Civil War using the AK47R rules modified to suit. So I bought a Gaz truck and T26, because they were cute and would fit the period quite nicely. I know that is a bit random, but hey it's a hobby.

Finally, I succumbed to some Pendraken 10mm World War One armies, and bought a British and German starter pack.

Not going to use AK47R for these, but rather the TooFat Lardies ruleset Through the Mud and the Blood. My Uncle-in-law writes military books and gave me one on the Somme, which I found to be a real eye opener to the period, which is mostly seen as portrayed in the TV series Blackadder Goes Forth.

Needless to say I have another shoebox of miniatures to paint up.

What else? I saw some excellent looking games. South London Warlords presentation had players getting into role as Zulu warriors with leopard print head bands. I really thought the Southend-on-Sea Wargamers 1984 game was impressive, and wish I had time to stop and chat with them. Finally, I was also totally impressed by Operation Peace for Galilee run by Crawley Wargames Club. Amazing looking game.

There was also a very nice 15mm Flames of War Russian game, unfortunately the name escapes me, but the terrain boards were superb.

So that was just over three hours of entertainment for the two of us, and I would like to thank all the clubs and the organisers for putting on such a good show. Next year how about advertising it a bit more, as you deserved to have a lot more people through the door for a show of this quality.

Two Films on a Theme

At the moment I'm really into my terrain building, but this week I thought I would do something different, and I don't mean more number crunching. I've been to see a couple of SF movies recently, and as both have been interesting to me as a gamer I'm going to review them en passant.

The first film was District 9, which quite frankly was the best SF film I've seen so far this year. Not that I haven't enjoyed the Watchmen, Wolverine was far better than I expected, the revamped Star Trek fun, and Transformers 2 action packed candy-floss.

However, District 9 made me care about what was happening to the people on screen.

The use of the SF trope of aliens landing on Earth as a way to discuss Apartheid in South Africa, can be seen a weary over-worn conceit. District 9s strength was that the story concentrated on the characters, and we see the characters grow and change from what has happened to them. Something that is rarely addressed in the usual Hollywood fare.

For me it didn't hurt to have a bit of mech action at the end either. Though I'm not sure in BattleTech terms whether the mecha was power armour, battle armour, a proto-mech, or even a very light battlemech? My gut feeling it was equivalent to a proto-mech.

I must admit I have an aversion to BattleTech proto-mechs, because of the animal forms the artwork uses to represent them. I think the mecha in District 9 looked like a mechanical version of the alien Prawns, but done in such a way that it still looked like a machine, and not some transformer beast wars cartoon.

A Hollywood blockbuster with Bruce Willis, where the main character might as well have been called Bruce Willis. Surrogates is pretty much the usual fare of Bruce doing his whole Die Hard thing. Not that I mind Bruce being Bruce, as I quite enjoy watching him go through the motions.

However, Surrogates presents a future where everybody is living in a virtual world through the use of physical representations of themselves. Not robots, but waldoes. I understand the film is based on a comic/graphic novel, but so far I've not found a copy to look at, so I can't comment on how faithful the film is to the source material. I imagine it is not that close.

Anyway, Surrogates is not a bad film, I quite enjoyed it, but again it was not a great movie, and in some ways this is really sad, because it so could have been great.

Surrogates is like District 9, in that it is talking about how society is dealing with common fears around change brought about by outside factors. In the case of Surrogates it is the fear of death that is making Western societies risk aversive. However, what then happens is that we get a Hollywood visual feast of beautiful people. All entertaining, but so many missed opportunities.

A part of the plot revolves around an epiphany that Bruce has after losing his surrogate during a crime scene, which then leads to his character re-evaluating the effects of using surrogates. This is what makes the film better than okay. However, the film makers missed out on the fact that if you are living your life through a surrogate, then you have the opportunity to show how the virtual world can be enhanced.

This would have made the point that the virtual world enhanced reality, and given more credence to the anti-surrogate humans he meets in the film, because quite frankly with such perfection the film shows you, why wouldn't you want to live in the cleaner, brighter and safer virtual world?

From a gamer's perspective, I could see the technology being useful for Cyberpunk scenarios, and even advanced neuro-helmet technology for BattleTech, though obviously non-canon.