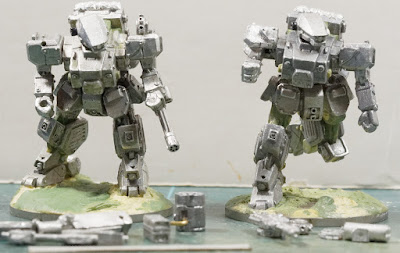 Progress being made with the rebuild of Espera's Ape suit on the left, and the running repose companion CAS-3-Mod 1 suit.

I've repositioned the minigun on Espera's ride to sit under the forearm, and I've found a suitable ammo chute to connect it to the ammo pack on the back. I've also decided to modify the missile pod to have it hang off the backpack rather than being shoulder mounted.

I have a stash of various Gears since my first acquisition off eBay. I've now added a few more. 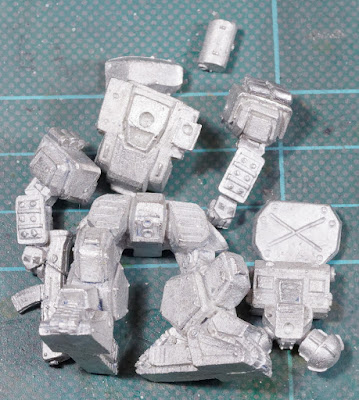 Above is an Armored Hunter stripped and currently sitting on my bench waiting for me to decide what I want to do with it.  I'm pondering over making it into a Heavy armored variant of an Ape, or a light version of a Buster thereby making my current Buster a two seat variant.

And pictured below are two Heavy Gear Kodiaks that I acquired and now stripped ready to be built. Now do I build them as twin seater Buster variants instead of using the armored Hunter for a single seat Buster variant? 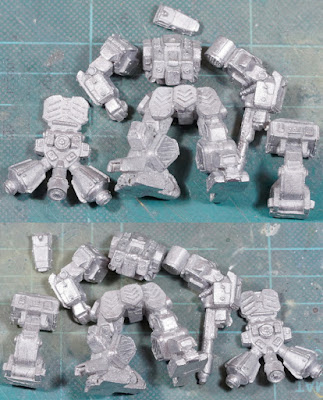 I'm almost at the stage, for a generous definition of almost, of wanting to start working on formulating forces for the rules. In a fit of inspirations I realized that asymmetrical combat between first world forces and third world insurgents/freedom fighters could be an option some players might want to have.

Certainly an actual thing in my Gate Walker setting, even if I haven't written any stories specifically about such actions, though the first book does have local Mujahedin assisting the Chinese special forces company attack my heroes.

Given that thought, and the fact I have a small stash of Peter Pig AK47 15mm miniatures I can make use of them to explore aspects of the rules I hadn't considered.

These are two Peter Pig Toyota Hilux's that I modified.

The one on the left I lifted and put tyres from a Humvee on to beef it up, and added a Bull bar on the front. The one on the right I made into a heavy version with double wheels/

Both have wheel wells enlarged, gotta keep street legal, to add more character. I also sculpted a wooden floor for the recoilless rifle variant to better hide the figures base. I've also undercoated some GZG robots for my Marine Corps squad with heavy support, and made up a BigDog from a GZG Quad Transport Walker from Germy's 2mm range, to carry bullets and beans.

For those readers who read my Strike Dog novel, I'm writing a short story about what happened to Romeo Echo Tango Two after they went missing.

And, in addition to all that, my beloved designed and printed up a poseable BigDog miniature. All the joints are articulated.

Okay, that's all folks. Catch you on the bounce.