Call me a starry eyed dreamer, but this was what Heinlein wrote about when I was a kid.  I've waited all my life to see mankind go back to visiting other planets.

Made me emotional to watch this, so good I've posted this on both blogs. 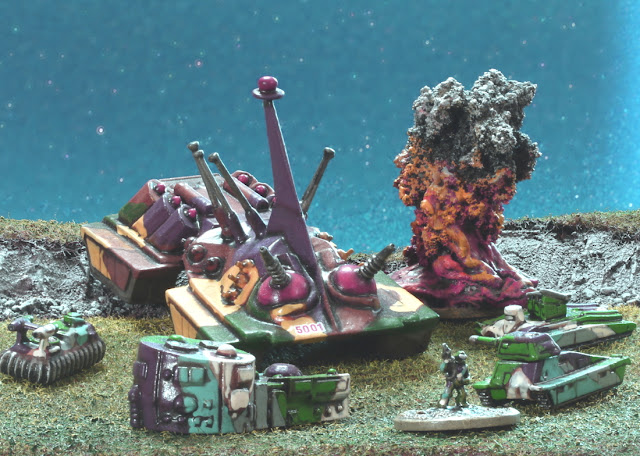 This piece is going to be a criticism of the Ogre Miniatures wargaming rules by Steve Jackson Games.  If you've followed my blog for any length of time it should be obvious that I have played a fair few game of Ogre/GEV, and have a sizeable collection of the miniatures.

The picture above is proof of that.

Let me start by stating the obvious, the board-game is a classic.  Now that has been said let me explain what makes the rules for playing using the miniatures less than a fully satisfying miniatures playing experience.

It's quite simple really, the photo above is almost the perfect illustration of the problem–range to move ratio.  It doesn't matter what ground-scale conversion one uses: one inch to the hex, two inches, three or even four the problem remains, and the larger you go just makes other things more difficult too, like the size of the table need to play on.

In Ogre, units move one to four or more hexes per turn.  The range of the weapons is one to three hexes, with specials like howitzers being an exception, and cruise missiles of course, which in my experience are scenario specific.  Also, in Ogre terrain blocks, as in costs movement points to cross, but line-of-sight is is irrelevant to targeting an opponent, as it is abstracted as a defence bonus.

So what's the problem?

When the distance you can move a unit is as great or greater than the range you can shoot, what you have is a high level (more abstract) game, and miniature wargaming tends towards a lower level (less abstract) game.  The move to range ratio is a big issue here, because it just doesn't give the feel of a miniatures game.

As a player of miniature wargames I want tactical problems arising from terrain blocking line-of-sight and manoeuvre, which is why I use my miniatures as tokens on a hex map board. 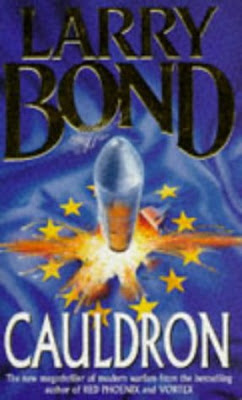 The last couple of months I've been out and about, mostly doing archery, and having fun in the sun.  I know, I know, not the typical wargamer pursuit.  I've also been taking the time to read a bunch of books from my to be read pile.  I've been putting up reviews over on my writing blog.

I picked-up a golden oldie, Larry Bond's Cauldron, which I've just finished reading, a story that runs to nearly 700 pages, which has given me lots of ideas.  But, more importantly as a writer, it gave me pause for thought about story presentation.  Things like staring in media res, in the middle of the action, or in this case not so much.  Cauldron is definitely a slow burn novel with occasional flashes of action to spice up the plot.

Of course the book is a bit dated, being written in 1993, set in 1997.  It's a yesterday's future of tomorrow, which despite being wildly out on its predictions, still manages to be relevant to today's political turmoil.  And by that I mean Brexit, and what that means for the future of Europe.

If you haven't read Cauldron I can recommend it, there are some nice ideas for post Cold War gone hot scenarios with Franco-German attackers facing Polish and Hungarian defenders, with the aid of American and British forces.  Maybe not totally plausible, as I find it hard to imagine the Germans going on the offensive with the French, but if you roll with it there's a lot of fun to be had.

Besides reading, I've been thinking.

Mostly around what needs to be done to lick my novels into shape.  This has been a bit of a slog, and at one point I was pretty sick and tired of my trilogy.  However, as I get closer to finishing the third book to go out to Beta readers, revise the second after been through the Beta readers, I have found myself looking forward to starting the next book in the series.

Shock, horror, probe I was lying in my bath listening to the soundtrack to the first Conan movie and ideas for two scenes just came to me.  Just like that.  Ideas for a mission to set the characters against formed, but whilst I have a theme, or more correctly I have some themes I can choose from, the plot as such remains elusive.

Got to have a plot, so I'm thinking about that.

This is long way of saying that post here will be a bit thin until I find some time between tapping on the keyboard to paint stuff.  Don't worry I'm not abandoning the blog, if for the simple reason my own setting generates ideas for making forces, which I then have to make and paint.  And I have so much stuff to make and paint.