A tray of miniatures that I stripped back to bare metal.  They were originally painted yellow, and used as stand-ins for my Combine force, before I became an MIB and started demonstrating Ogre officially.  I've split the models that use to be my Combine force into those that are going to be used with my Nihon Mark 4, while the rest will form the core of a Chinese force at some point in the future.

Most of the models I have are the old Ral-Partha BattleTech vehicles, including the long out of production original Pegasus scout GEV, which is a lovely miniature.  The light tanks, as I have said before are Heroic & Ros miniatures; the turret from their Merkava, and the body from the Bradley.  The modified SRN4 is if I remember correctly from Stan Johanson's range he used to market for BattleTech, long gone I'm afraid.

I held back on sorting out these models under the mistaken impression that SJG were interested in developing their Ogre miniatures line, which clearly they are not, because they can't make money selling them.  Every cloud has a silver lining, in my case it means I can expand my forces using stand ins with a clear conscience.  Finally, I also want to shout out to Super Galactic Dreadnought's blog, where he posted these two images that I'm re-posting for the record. 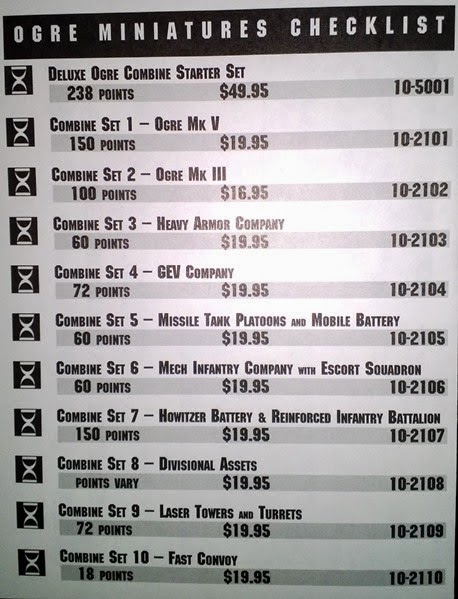 If you look at the list above one can see Combine Set 8 with the tantalising title of Divisional Assets, which may have been a tracked mobile command post of some sort. 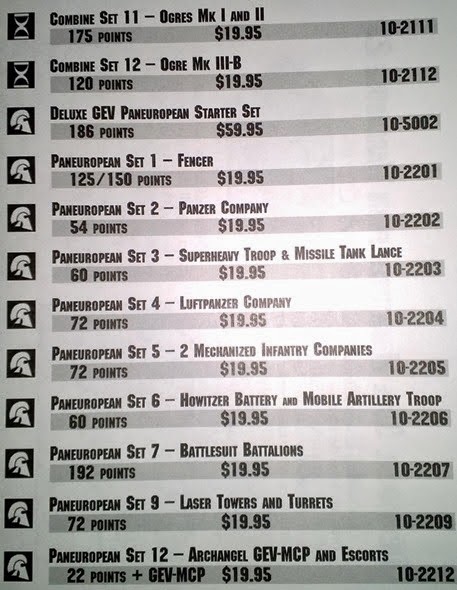 The list with the Paneuropean Set 12 Archangel GEV-MCP and escorts would have introduced another new unit to the game, and the escorts were most likely to have been some GEVs.  However, none of this ever happend, and most likely never will.

In my opinion, without a targeted marketing strategy to generate sales interest, and new additions to the miniatures line to maintain it, Ogre miniatures was never going to make enough money for SJG, and arguably even if it was making money it wouldn't make enough to satisfy the bottom line.