Well here they are, my force for the OGRE demo.  This photo doesn't show everything as there is an extra layer of infantry under the infantry you can see on the left.  Still spaces to expand a bit more, but my Combine infantry and vehicles will require separate trays, which I guess I will rotate with the Pan Euro forces as required? 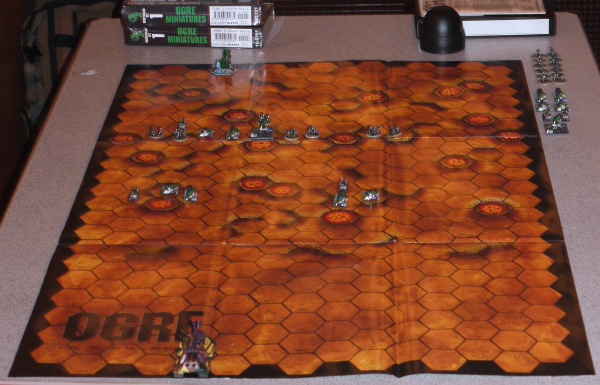 This was the board we use, from the Deluxe Ogre set that Roger brought in.  Set-up was done by me on the fly as we didn't have Steve Jackson recommended layout to hand.  The plan was to have the players be the defenders, and let them have a couple of extra armour units, but that plan was changed to just letting them be the Ogre.  So I took one GEV to make up to my full 12 armour units for the game. 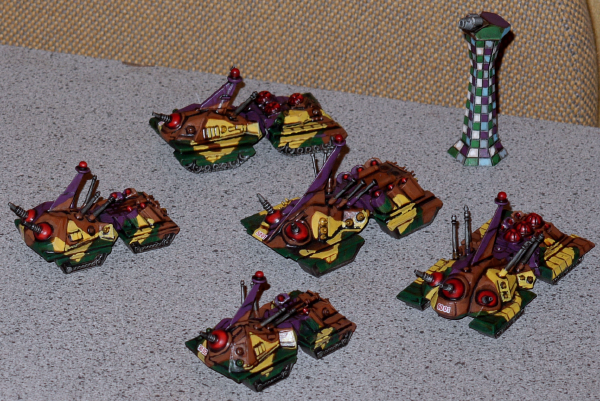 My other five Ogres were put out on display for people to look at and handle.  They were much admired and people all thought the use of magnets to join the two halves together was good.  All down to seeing Daniel, the Ogre line developer, doing this to his Ogre models.

The first game and the first take down of an Ogre for the day. So close and yet so far.  The second game and the second Ogre is taken down by the defense, with enough defenders left that this counts as a total defensive victory. 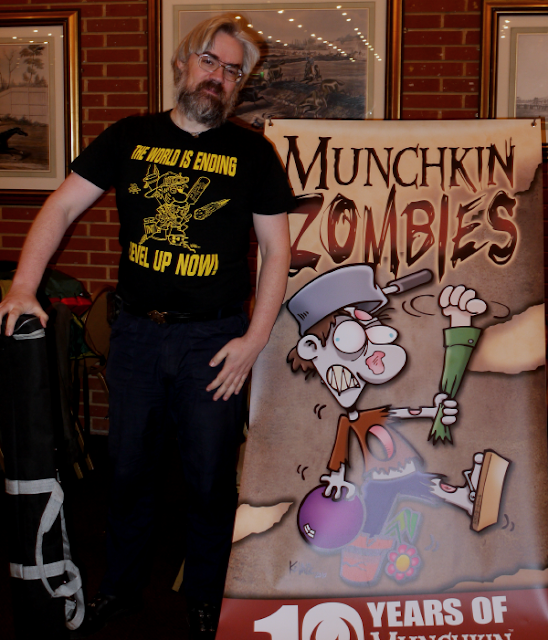 Roger, my new cell leader and Southern head honcho setting up the day.  I had arrived early and helped me to put out the display boards he had brought back from Essen.

I was at the show for eight hours, and five games of Ogre for new players.  On reflection, given that I played the defense for four out of the five games, the Ogre only won once when I was helping two friends to play the game against each other, I think that I'm going to have to reduce the defense force by one or two armour units, when I play defender, to give new players a better experience of the game.  It's not that I don't like winning, but that's not my role when demoing, and I know the stats and the tactics far too well for my own good.

I got to briefly rush around the show while catching something to eat, and bought two books from House Atreides, a second hand stand, for five pounds each.  A nice condition copy The Ogre Book, first edition from 1982, which is good to have as my copy fell to bits and had to be put into sleeves.  The second book I got was a  copy of Heavy Gear's Life on Terra Nova in reasonable condition, which will help me get into the game's background more.