After Dragonmeet I can now relax a bit and paint something other than OGRE/GEV miniatures for a while. So here are my work in progress pictures of two VOTOMS I've been working on. These are painted up using the British Army on the Rhine Berlin Brigade pattern, but with a different colour pallette. 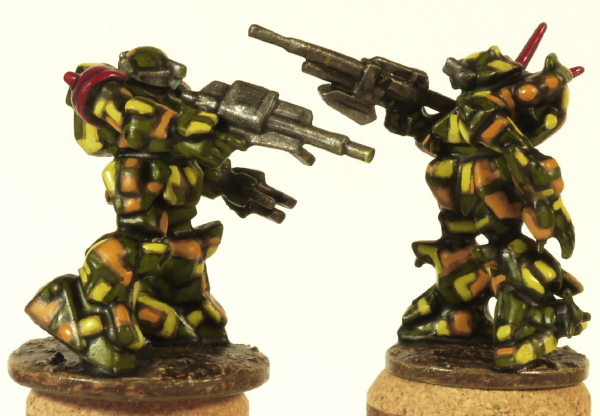 Still a little bit more work to do around tidying up the guns that got a bit of over paint on them.


As you can all probably imagine these were quite fiddly to do, and all done free hand with no masking tape. The models are so small that using masking tape for the camo pattern would have been a nightmare.

Does this I'm getting into Heavy Gear? Yes it does. While BattleTech remains my first love, and the mechs from Fang of the Sun Dougram are my favourites, I also like VOTOMS too, and as Freddie would say I want it all. Of course this means I will have to paint a lot more gears, as mechs are called in Heavy Gear, but that is a burden I think I can bear?

So I have a bunch more of the Takara VOTOMS on a tray waiting to be painted. However,  I'm still going to need an OPFOR, so I just ordered from Dream Pod 9 a pack of NuCoal Jerboa gears and some spare weapons for conversions from them. After getting a copy of Life on Terra Nova at the weekend I've been catching up with the background universe that Heavy Gear is set in. While I'm drawn towards the Southern factions, because they look most like VOTOMS, because I have a load of real VOTOMS I thought I would go with using NuCoal gears for my OPFOR.

I like the look of the Jerboa gears, which was why I chose NuCoal as a force. My VOTOMS will represent a Southern Milicia unit. More updates in due course, and some pictures of the two VOTOMS that Jon from GZG gave me that I have now assembled.