As you may remember here I find the coffee at Colours pretty abysmal. It really colours my attitude to the show, but this year I went and had a really fabulous time after playing a fantastic game of Charlie Don't Surf run by the Ross aka "Kurtz", one of the nice guys at the Abingdon Wargame Club.

But first lets have a bit of a preamble before I blather on about the game. I left West London just before 10.00 and arrived at Newbury around 11.00. Walked to the Grandstand and paid my entry fee, and the weather was georgous. First thing that took my eye on entering was the Antenocitis Workshop stand, which was right by the door. They had some sweet 15mm Aliens inspired APCs. Very nice, but they are not due out until October, otherwise I would have been tempted to buy one there and then, and blown my budget to boot too. Sorry no pictures as I though they would be on their website, but apparently not yet, or at least I can't find them to link too.

Then I went to Ground Zero Games next and bought some Hound Dogs, which are 6mm mecha inspired by VOTOMs. Talked to Mel and Jon, about stuff, the state of the games industry, and just stuff about friends really.  Took a really nice, but out-of-focus picture of Jon & Mel, dam the light in the building, really needed a tripod, but I hadn't come that prepared.

Browsed the other traders on the ground floor, and bought some blank dice from one stand, IIRC Miniminiatures, so that I can use them for OGRE/GEV dice stickers I was sent by Dave aka Toltrin who has a blog too.

Colours is pretty much a traders paradise for anyone wanting to buy stuff for miniature games, including favourites like Peter Pig 15mm figures and Fieldworks buildings. Not to forget my favourite 10mm manufacturer Pendraken, who also have a friendly forum I hang out on. I also bought some Dullcote spray off the stand where I have bought Dullcote before. Can't remember the stands name, possibly Antics? Nice guy anyway. 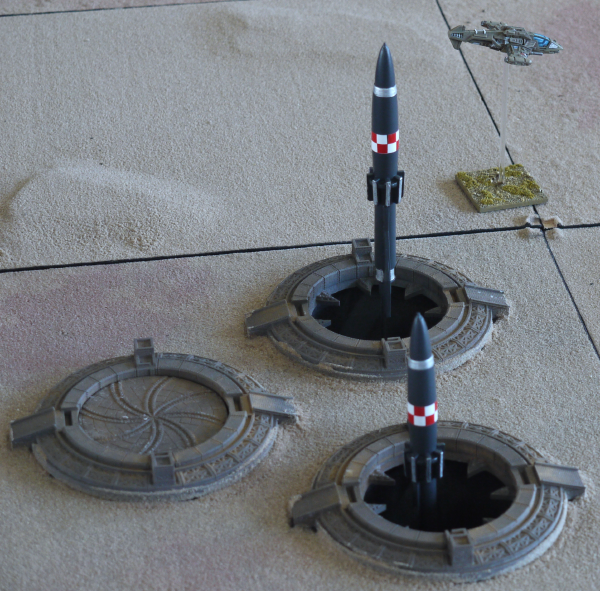 Here are some nice rockets I saw from Spartan Games, and below are some of their equally nice tanks and APCs. All done in 10mm resin. Good to see a second 10mm SF range being brought to market. Nice toys, yummy castings. Also, I was informed by Steve who works for them that the plan is to release the models in 10mm, 15mm and 28mm and let players decide what they want to buy. I wish them all the very best in this endeavour. 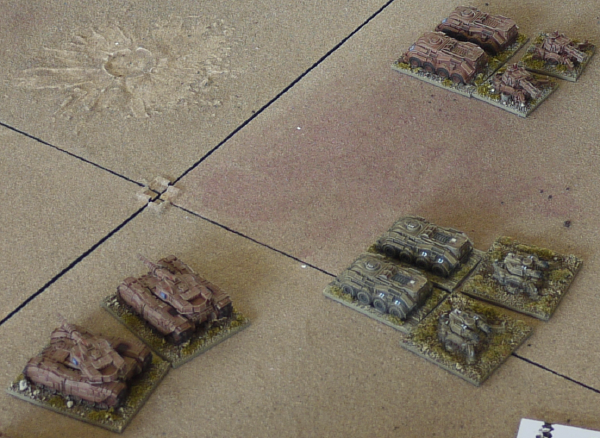 Bumped into Henry from Battlegames afterwards, and again chatted about stuff, as one does with people you know. In this particular case we talked briefly about Spartan Games new Firestorm Invasion: Planetfall 10mm wargame and reviewing them in Battlegames. 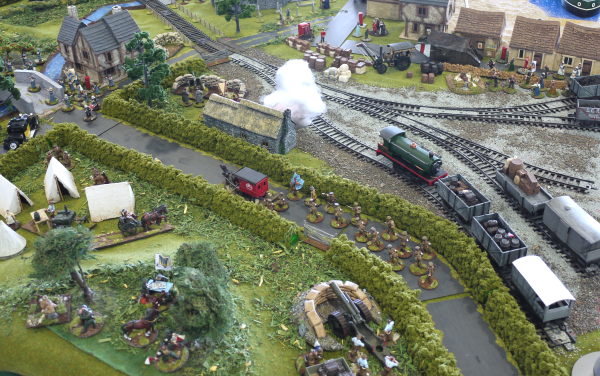 A Very British Civil War put on this eye catching game with lots of lovely toys deployed. I especially liked the aircraft. 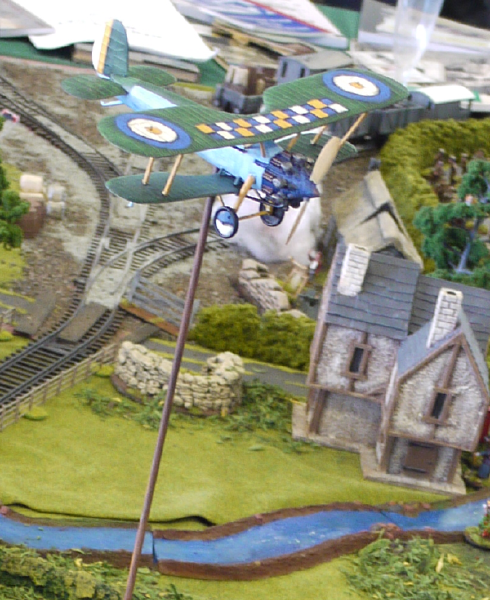 Then I had lunch, and ate a hot dog but avoided the coffee, having diet Coke instead. It wasn't a bad dog either. After sunning myself, I did say the sun was shining didn't I, went back in and let my eyes acclimatise to the apparent gloom. Surprisingly difficult to get really good pictures at this venue, given the amount of glass that it has, which gives the whole place a light and airy feel, but not as bright as you would think.

Anyway, found Richard running the TooFat Lardies Dux Britanniarum game, and briefly said hello. Richard was in full flow demonstrating the game, and it seemed like the players were having a lot of fun. Had time to speak to Nick, and we shot the breeze talking about gaming and stuff really. 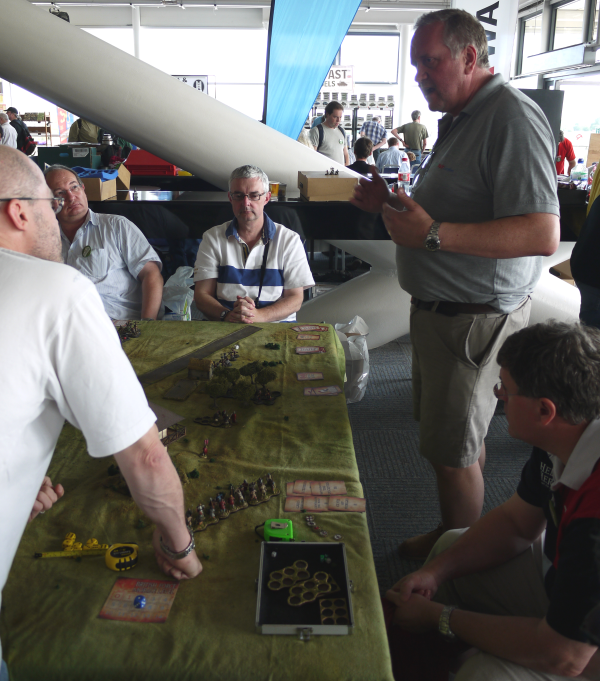 The I went upstairs, with perfect timing, for the start of the "Indian Country", the Abingdon Wargames Club's participation game of TooFat Lardies Charlie Don't Surf. I know that you are all excited to know the outcome of the game, so I'll put you out of your suspense now, and just say that Nick, Chris and myself who played won both a military and political victory for the Americans. Hurrah. 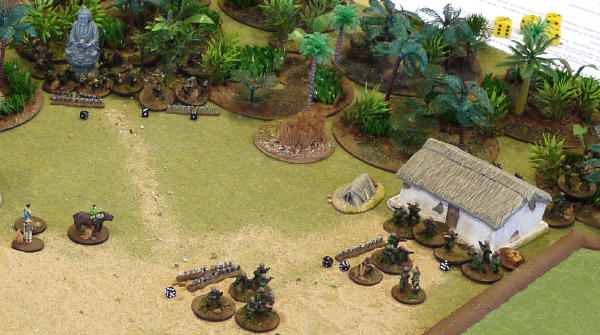 Here is a close-up at the end of the game, due to the show starting to close, of the final position of the American forces. Casualties taken by one squad and Dust-off called for. What looks like North Vietnamese regulars have just been lit-up by a Cobra gunship. The little black dice are showing the shock levels each squad has accumulated.

Cobra leaving the scene and going back to base. Due to a lucky roll by me we were told that the base crews were arming up another snake to support us, which was a good thing.

Incoming medical slick about to land and evacuate our casualties. I love the troops in the paddy field in the background of this shot. I believe we got the best American result for the day with both a military and political victory, which is no mean thing. It was great to play a game and use the dummy blinds to keep the fog of war going. Lots of nail biting uncertainty as blinds crossed each others path in the jungle, but failed their observation rolls. Very realistic according to an acquaintance of mine who use to rescue downed pilots during the war.

So last year I thought I wouldn't go again this year, but I did because I wanted to get Dullcote and the Hound Dogs. I'm really glad I did, and all I can say is that when going to a show, join a game and get stuck in, as it really is fun.