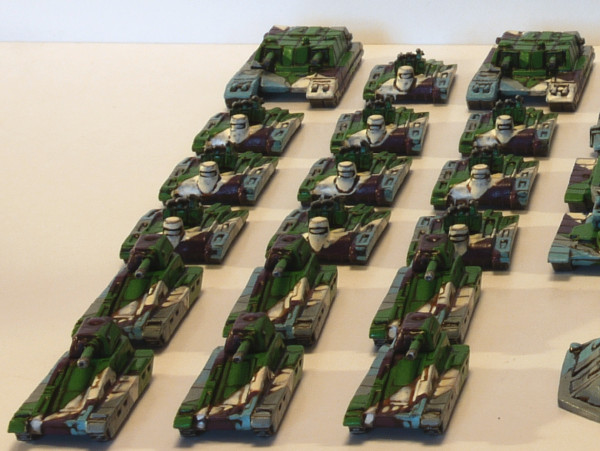 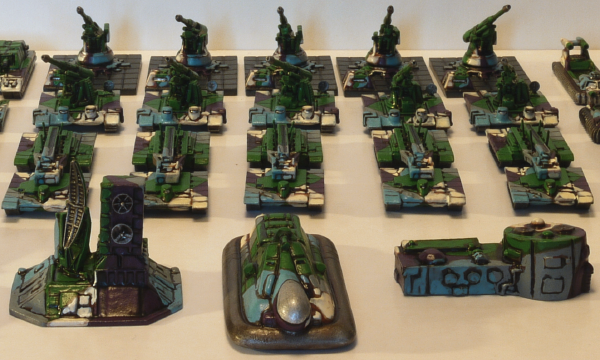 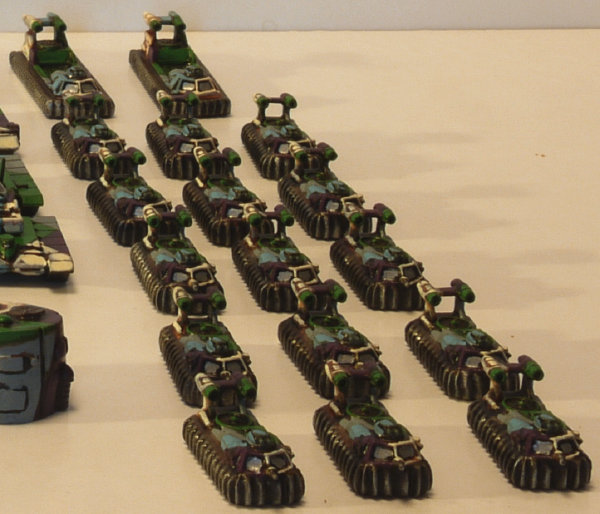 Well now that at long last I have these babies painted it's time to organise them.

Originally I was thinking that all my Pan European Federation models should just be the 7th Demi Brigade Légion Etrangère, but a demi-brigade is just a regiment by another name, and I feel that what I will ultimately be able to field onto the table top is more like a full on brigade.

So my plan is to use my GEV force as the armour core, along with infantry in their Seguro GEV PCs, as the basis of my 7th Demi Brigade Légion Etrangère. I will then add some LGEVs as the recon company attached to them.

All the Tanks, missile tanks and super heavies will form another regimental size force, which may be inspired by a French formations too. I know that the super heavies will be paying homage to the French Char 2c, and be named as such. I shall to research some French tank forces for inspiration.

Here is a picture of the next batch of models for my Pan Euro force, as you can see I have assembled my Fencer OGRE too. Whatever next? Will wonders cease?

Yesterday I received in the post my Warehouse 23 order that has another six GEV Seguro personnel carriers and infantry, six more LGEVS, and 72 Pan Euro infantry with support weapons. So I'm going to base up the infantry today, as these are needed for the Dragonmeet convention demo game I'm running on the 1st of December, which sounds like a long way away, but time flies and they need to be done in time.

As a bit of a side project I've even gotten around to starting work on my Combine force, for those times when I need to support my OGREs, and gasp, shock, horror, probe... I've got my custom sculpt of the OGRE Ninja out to start work on finishing it. ,This model has just sat around for years gaining dust, but now its time has come. The maturing phase is ending.

Finally,  it has arrived. 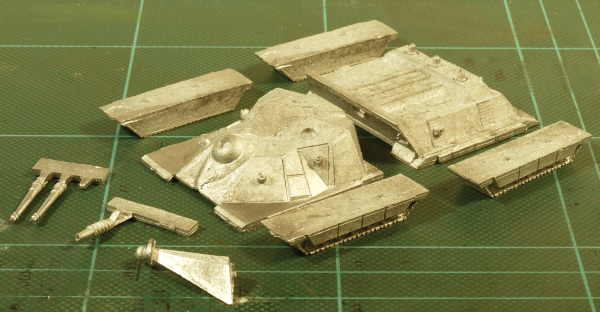 Oh, yes pure Combine Mk4 Ogre goodness. I can see why this was not put into production after the test models, because it's one enormous model, and size wise I can see the logic of not having a Mk4 that is larger than a Mk6. Anyway, I have plans. Muwuhahahaha...

NB: Since posting this I've renamed this force 7ème Brigade Blindée, just in case you're reading this and are confused by the two names.