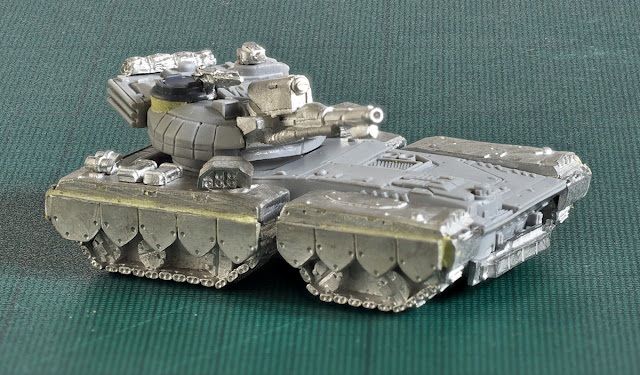 When I got the Visigoth Khan from Dream Pod 9 my first thought had been it looks very Russian, but when got to thinking about playing games I felt that my Russian walkers would look better with air support, as in a helicopter gunship.  Given that the Chinese pretty much copy everything the Russians do it wasn't hard to imagine this tank as a futuristic Democratic People's Republic of China vehicle; what China has morphed into in my future setting of 2072.

But you may remember I posted an earlier picture of this model, with an Abrams tank, and decided that it was too large for my Bad Dog 12mm project.  Therefore I did a small conversion to the main hatch to accommodate visual clues to this tank being a 1/100th scale or 15mm size vehicle.  This of course means means that I'm going to do a 15mm Heavy Gear force as well as my 12mm Bad Dog universe force.

Despite giving myself an extra project to paint, I'm quite pleased with this, and may well buy another because one is good, two must be better!