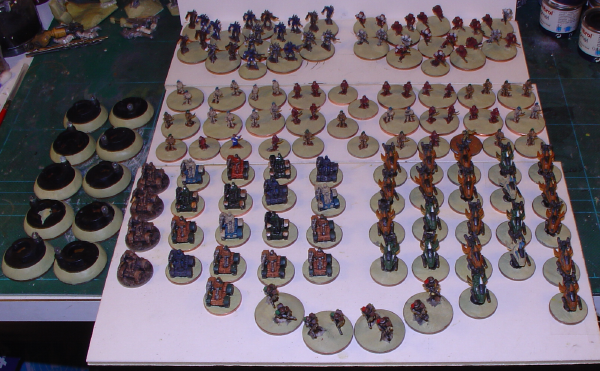 Like most wargame hobbyists I too fit the stereotype of someone who buys stuff and then doesn't get around to actually doing anything with it, all the time buying new stuff that is shiney, which has caught my attention. I'm currently off work sick, and have as such a lot of time, but very little inclination to do anything, hence the sick part. However, I have dragged myself to the work bench this week and spent sometime texturing bases of trays of infantry figures.

The picture at the top are all the extra figures I need for the Mummerset campaign I'm running. Basically more infantry than I've ever painted for BattleTech. What you can see here are two motorized infantry platoons, followed by two standard foot infantry platoons, and at the rear one platoon of Power Armour and one jump infantry platoons. Oh, the bases to the left are modified MWDA clix flight bases for VTOLs and helicopters.

Texturing infantry bases is not the most interesting task in the world, but suits my limited concentration span, and it is something I can do while listening to a podcast. Not something that I would have thought I would ever find myself doing as I find listening to talking voices on the radio rather distracting, but at the moment as long as it is the right kind of distracting I can listen to a podcast about wargaming.

In particular I've been listening to View from the Veranda and Meeples & Miniatures both are quite fun, though I prefer View from the Veranda more, because the chemistry between Henry Hyde and Neil Shuck just really works. Anyway, those of you who want something to listen to can check these out and make up your own minds.