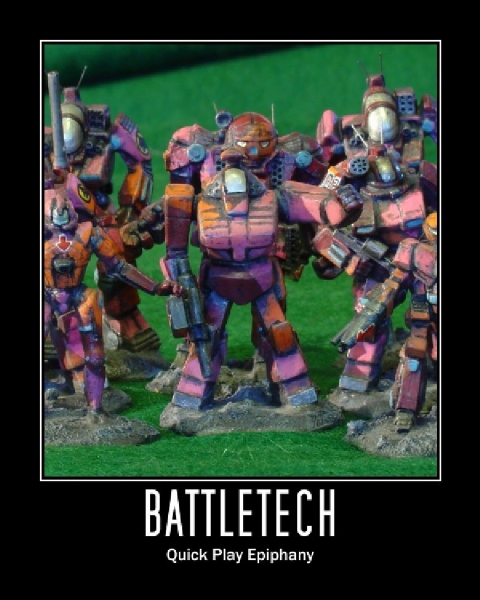 I was asked in the previous blog how I decided what cards to design for using with BattleTech?

The answer is actually by trial and error, though at the time I started I thought I had worked out what I needed and that it wouldn't need correcting. How wrong can one be? Hubris I'm sure. Anyway, I thought that the question deserved an answer, if only so that others can make their own mistakes and not repeat mine, which is always a good things to do.

I started by having a pack of cards that were made up for TooFat Lardies Through the Mud and the Blood and Charlie Don't Surf games that I got from ArtsCow that had been graciously posted as being freely available to anyone who wanted to buy a set. Unfortunately, I don't think I can return the favour as I've used some imagery for my sets from Catalyst Games Limited, and therefore my sets fall under personal use only, so you will have to make your own. Having a pack of cards to look at allowed me to at leat think about what I might need.

So the first thing I did was make a list of all the mechs I had and to what factions they belonged.

Obviously, if you are not fussed about factions, or just want a card for very mech you own as a generic card, then I can't see why one couldn't just make up a deck with all the different mechs you own, or want to play with. Though I'm not a big faction fan, I do have all my mechs assembled into units that I think match each other in some way. So all my Dougram bipedal mechs are in my Pink Panthers Battalion, while the Dougram quads are in my House Steiner unit, along with faction specific mechs like the Zeus.

My House Kurita unit is made up from models from the Macross show UN Spacey forces, while my House Marik unit has Marauders from Macross and Locusts from Crusher Joe, mostly because I think that a unit should look like all the units came from one design philiosophy. YMMV.

So, where was I? Ah yes, making lists. I then added some extra cards to the pack. These included two what I call "vent" cards. When both of these are drawn the turn ends. Given that they are shuffled into the pack at random this means that some turns can be very short, or you can run through the whole pack on occasion, but by and large you only get through about two thirds of a deck. So not every unit in the deck will move every turn.

This mechanism generates a lot of extra tactical problems for players, and yet at the same time it simplifies things. The first thing is that you can't be sure when the vent card is going to appear, but as soon as one does then you know that the turn could end on the next draw of the cards. This strangely makes it a lot easier to move units as over planning stuff by micro managing doesn't work when you can't guarantee what you will be able to move in a turn. This also speeds up the turns.

At first I planned on giving all units a card, but since this is BattleTech, a game about battlemechs, I decided to make all vehicles and infantry move by platoon. However, after the first game it became apparent that battle armour is better moved by squads, as each squad is effectively equivalent to an infantry platoon in defence and offensive capabilities.

For artillery I again had a card per battery, but wrote on the cards that they could either move or fire. Now most of the time artillery will be off board, but given I was going to allow counter battery fire, adding in the option seemed like a good idea at the time. Unfortunately, not yet play tested, but I imagine it will happen at the next game. I also added a forward observers card so that one could call in the artillery. This allows one to dispense with tracking how many turns the fire takes to arrive, as all too frequently what happens is that the artillery cards are drawn before the forward observer card and when it is drawn no more artillery arrives before the vent cards are drawn to end the turn. Neat huh?

Finally, I added special cards. First of were cards blind movement, again not yet play tested, but in principle one will be able to move units as blinds, which are not revealed until spotted, fired upon, or when they fire with a certain amount of dummy blinds to add to the confusion. Then I added a special event card that could be scenario specific, and a faction specific card. For the House Steiner unit this was the "wall of steel" that makes all the units fire when it is used at the expense of being able to move, and of course the units can fire again at the end of the turn as well. Assuming the player manages the heat build up of course. I plan to have a House Kurita "banzai" when I make up a pack for them at some point. I will have to think what special stick I can assign House Marik though? Suggestions welcome if anyone has any ideas. And I think that is it?

Not quite, I remembered I also made cards for air strikes, which we play tested as if they were artillery strikes. That didn't work out all that well, so the use is going to be changed to when the card is drawn it can be used there and then, but afterwards it has to be discarded from the deck. This is to represent the limited amount of air power available in the campaigns and the fact that aircraft have to go back to re-arm and refuel between sorties.

So, I made a couple of decks up and I then had to go back and make a couple more decks up from the refinements that came from play testing the idea. Ideas for variant cards become quite addictive as one thinks if I had a card that did this? So this is not something for people who want a ready to go answer as making cards, by whatever process, will require some play testing and modifications to meet your needs, but I for one will not be going back to games without cards for controlling movement and length of turns, because for me it has just made the game so much more fun to play.