End of an Era: Photographic Meanderings


As is my wont I'm meandering a bit off the general theme of wargaming to talk about photography, as I've just bought a "new" secondhand camera off eBay.  This act has been quite unsettling in some ways, as it marks the end of me using a 35mm SLR (single lens reflex).  Though realistically this is more like the full stop that ends the sentence, one that has been left unfinished since 2002, which was when I last used my Pentax MX in anger.

When I came back into wargaming circa May 2008 I started to take pictures for a modelling thread that I have on the BattleTech Universe Form here: Workbench.  This required me to be able to post digital pictures, and for a time before I had considered buying a scanner and using film etc, but quite frankly the cost in time and effort, as well as money, just wasn't worth it.  I was lucky in that my partner lent me a Sony Cyber-shot DSC-V1 a 5 megapixel camera with four times optical zoom for me to use.

The shift from film to digital was quite interesting, because it turned me from an experienced user into a complete newbie.

Below is a picture of my SLR system that centered around my Pentax MX, which I've owned for many years, having bought it in I think 1981 from new.  Over the intervening years I bought lenses for it and a spare Pentax ME body about twelve years ago.

As you can see above The black MX has a 2.5 FPS auto-winder, which was a big deal in the 1980.  This is actually my second one, as the first fell to bits and I bought a second hand replacement many years later, which has served me well ever since, and still works like new.

To the extreme left is one of the two original lenses I bought back in the day, a Pentax M series 100m F4 macro for taking pictures of models funnily enough.  Mounted on the MX is a Pentax M series F3.5 15mm super wide angle lens that I bought second hand, which I loved for its extreme 114° field of view.  In the middle is a second hand Pentax M*(star) series F4 300m, which again back in the day was the smallest, lightest telephoto lens of its generation.  On the ME (original ME not ME Super) is the other original lens I bought back with the camera, a Pentax M series F2.8 40mm pancake lens, which was the slimmest lens that you could get, and made the Pentax MX feel light weight and compact (for definitions of light and compact that today seem laughable).  Finally, on the far right is a Pentax M series F4 24mm wide angle, again bought second hand.

The reason I emphasize the second hand acquisition is because in their day these lenses were arm and a leg expensive, costing way more than the camera.  Needless to say I used this camera quite a lot over the years, and as my first degree was in photography I have a certain amount of technical competence.

It can also be said that I was a manual everything user, as I never saw the need for automatics and the purchase of the ME was a bit of an aberration given that all of my lenses have the capability of resolving more detail than high street commercially processed film can render, which was driven by the desire to have a cheap point and shoot camera.

So, it was a bit of a paradigm shift for me to get my head around the fully featured Sony Cyber-shot DSC-V1.  However, I did get to grips with it and have been taking pictures with it for the last three or so years.  Still haven't used all the features, like for instance the nightshot feature.  Not felt the need, as my main aim was to take pictures of my models, or pictures of full size vehicles etc. 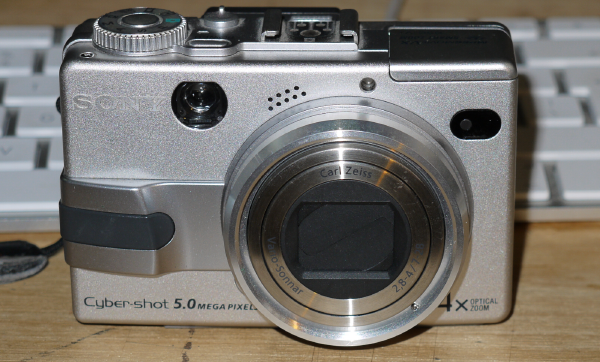 Just for the record the above picture is the first taken with my new camera, which I'll come to in a bit.

This Sony model first came out in 2003 and was pretty dam good for its day.  It has a 1/1.8" (7.2 x 5.3, 8.9mm diagonal) CCD (charge coupled device; the thing that acts like a film in my Pentax) with 5 megapixels, and the lens is a F2.8/F4 zoom that can be stopped down to F8 (stopped down is when you make the aperture of the lens smaller that then gives you a greater depth of field, which is really good when taking pictures of small things).  You've seen the results here on this blog.

However, even with the lens stopped down to F8, using a tripod to compensate for the long exposure times, the fact of the matter is that I've not really been able to get the picture quality I want (namely close-ups of very small 10mm figures) that shows the work I've done in the best possible light.  So I took the plunge and bought a new second hand camera. 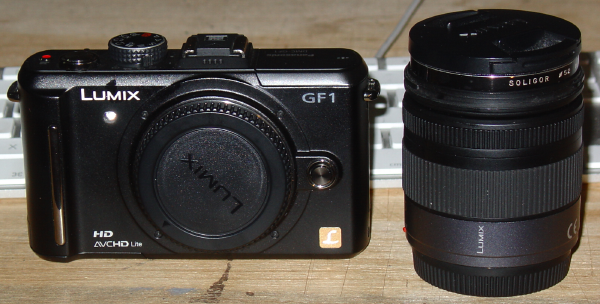 Above is my new Panasonic Lumix DMC GF1 that has a micro four thirds CCD (18 x 13.5, 22.9mm diagonal) that shoots at 12 megapixels.  The lens is a 14 to 45 F3.5/5.6 zoom that stops down to F22.  So this camera is big step up from the Sony, as not only does it have more megapixels, it also has a much larger CCD, which means better "quality" too.  Once I've got my head around all of the controls and set up everything to my satisfaction I shall be posting pictures using my new camera in the weeks that follow.