It has been a while since I've posted anything about my efforts to put together two WW1 forces so that I can play games set in late 1917 and finishing with the 100 day offensive of 1918. While I'm no where near finished painting anything of note, what I have done is finally finish basing all of the figures for both the Germans and British forces I am building. Above shows the British company and I'm thinking about about adding another base of three Tommies to all the rifle squads because as they stand each platoon is only 33 men. This would strengthen the platoon to 39 men. As you can see I have six Vickers machine gun teams and a four mortar teams to support this lot when in defence. I'm also making up shock markers using casualties on stretchers, but again I haven't decided how many I will need? Or,  I could use one each with a die next to them to indicate shock points. Any advice would be welcome.

Alternatively, if Pendraken were to do some poses of Tommies firing either prone, kneeling and or standing, then I could add two scouts to each platoon, which would only strengthen them up to 35 men. I'm undecided about this.

The German company organisation is taken straight from the example in TooFat Lardies Through the Mud and the Blood book, and represents a late war company with Stosstrupen attached, which makes them quite formidable and what has caused me to re-evaluate the number of Tommies I have in my British company. 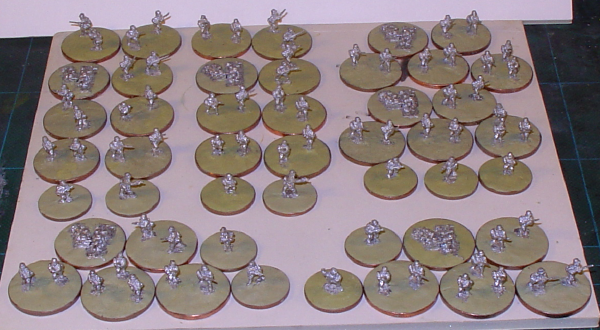 To strengthen the German company each kampfzuge will have a stoss gruppe (shock troops), or assault grenade squad attached to stiffen them when attacking. Finally, there are the erganzun zug consisting of sixteen men with four NCOs and the reserves made up of a recce squad and granaten werfer squad. In addition, I've added two flame thrower teams and one 37mm artillery piece that the stoss gruppe could have attached when in assault.

I also have tanks for the British; three MkIVs, three MkVs and three MkI supply tanks, plus eight Whippets for the break through group, and plan to add a cavalry troop/squadron to this as well, but no pictures of them yet as I haven't managed to assemble the models.

Besides WW1 actions I intend to use this force as the basis for a what if continuation war that rolls over in 1919 and beyond that is based on the Germans not counter attacking when the Americans arrived, but rather basing their strategy on defense in depth with mobile quick strike formations. This story could then develop into a breakdown of both sides ability to wage war when the inevitable discontent the lengthening of the war produces leads to uprising and civil war breaking out. This does preclude me going all out and adding H. G. Wells Martians for a War of the Worlds scenario. I have some tripod war machines that would serve quite nicely for this idea.