I'm writing this a couple of days later than planned, because I've allowed myself to be side tracked with stuff; Real Life (TM). One of the things I was musing on, as one does when one is thinking about writing is topics. I have loads of topics to write about, but as most of them involve pictures of stuff I've been painting etc, and I've singularly failed to take said pictures, they will have to wait. Not that every post needs pictures, but the feedback I get is generally along the lines of where's the picture!

Anyway I've been following advice given by Gordon Y in the comments of the previous post, and have primed up and dry brushed some of the vehicles I need for the Mummerset campaign; in particular those that I need for OPFOR and the occasional friendly support stuff. 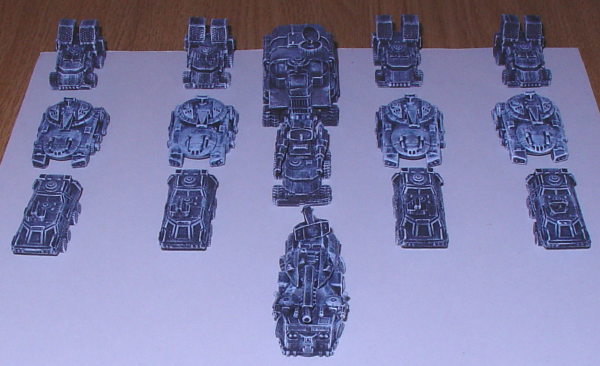 First up is the OPFOR, in this instance the units for the 1st Republican Guards of President Marx, under the command of General Spencer. All of these are MechWarrior models de-clixed by the removal of their bases. At the back are four missile tanks with the battalion/regimental command truck in the middle. Then there are four wheeled tanks with an anti-aircraft platform in the middle. In front are four APC/armoured cars, and a Morningstar the company command vehicle leads the way. What I plan to do next is clean up the castings before I paint them up properly at my leisure.

What I'm short of for this company are suitable vehicles for transporting the the company of infantry. I had originally planned on using the APC/armoured cars, but to my eyes they only seem large enough to hold a squad, which is very realistic, but it would mean I would have to acquire and paint up another twelve models. I'm lazy and feel painting as few models as possible is a far better thing to do than paint up hordes. 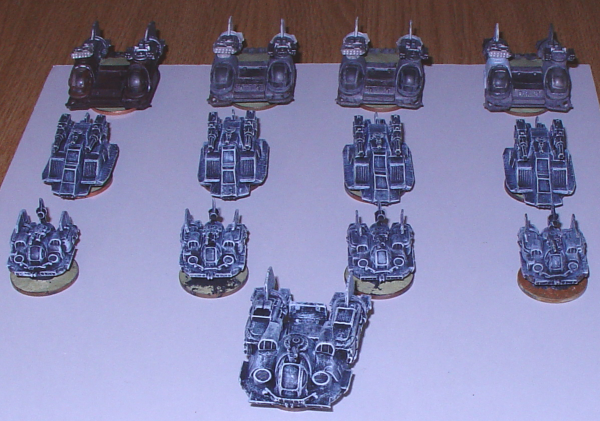 Here are the 3rd Royal Guards under the command of Colonel/General Whales. Again all of these are converted MechWarrior clix models. At the back are are four SM1 self propelled guns that have been converted to troop carriers, and I've also added a small missile launcher to each so that they can provide indirect fire support. These are quite large models and I can fully imagine them carrying a platoon each. Next are four hover tanks, and in front of them are four scout craft. At the front is the company command vehicle.

Originally I wanted all the APC GEVs to be based on the model I'm now using for the company command vehicle, but it is one of the MechWarrior promo models that I was lucky to get hold of, and I haven't seen any since on eBay. The plan had been to to use the models at the back as the basis for missile carriers, rather than troop transports, but needs must as they say.

Finally, HMS Burlington, a resin model from Pendraken miniatures, which I've assembled, but not yet finished. It is a pastiche of a WW2 Flower class corvette, which I intend to detail up with gubbins and gribbly bits to make it more visually stunning, because as it stands it is a bit bland.

So there you have it, a picture of another weeks progress on my workbench. Well not quite as I've done a load of infantry, but have yet to find time to take some photographs of them. Neither have I found the time to take pictures of the completed infantry that I promised to post up here from a couple of blogs back.

However, all things considered not a bad weeks worth of work, even if I feel I could have done more the truth is I've been too tired to concentrate on making and painting things.