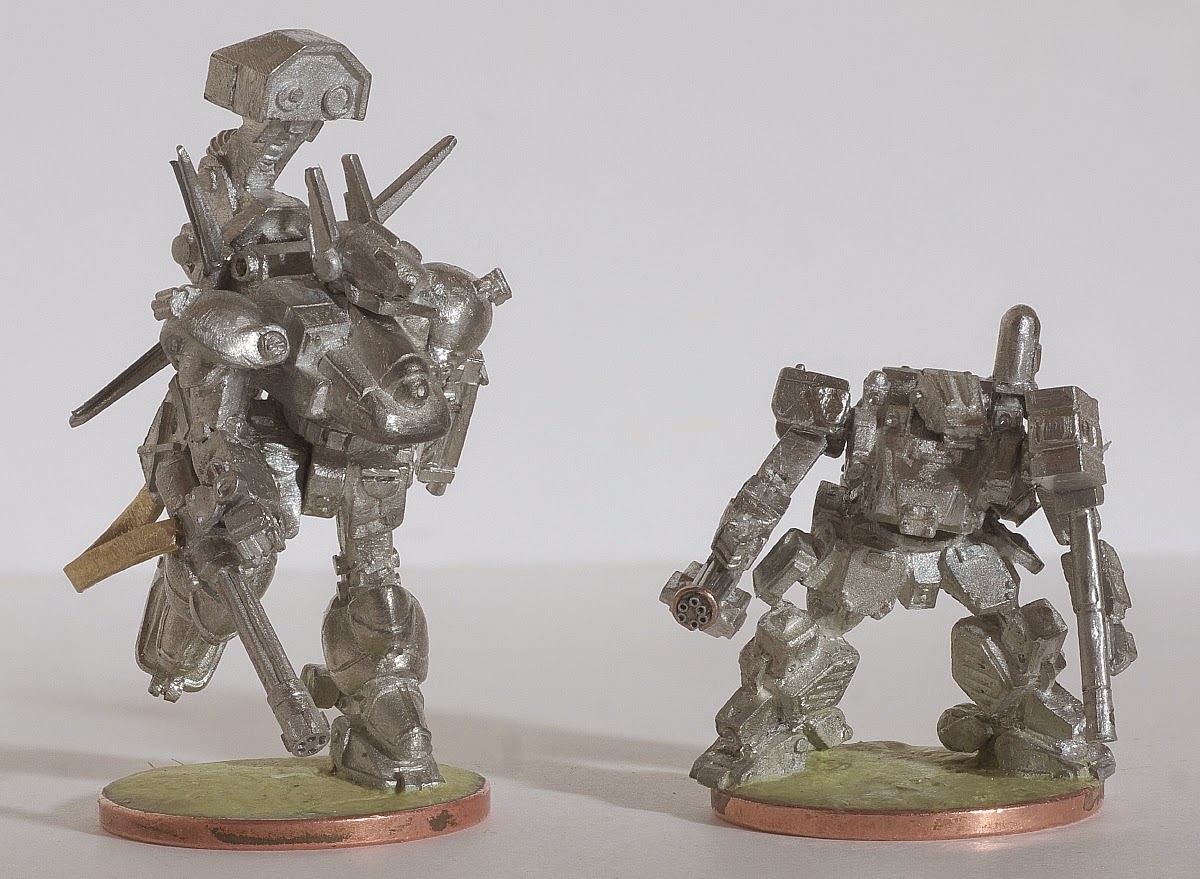 I have been beavering away in the background between writing working on converting more of Dream Pod 9 models into representations of combat armour from my novels, as one does when one is slightly obsessed with the world one has created.  The model on the left I'm currently calling the Cyclops, which may change, because the brevity code word for UAVs operating over an area is CYCLOPs (go figure how a brevity word is longer than UAV, but I don't make the rules about how the military names things – I just try and mimic them to make plausible future names for my weapon systems).  The model on the right is the Army APE combat armour; in homage to Robert A. Heinlein's Starship Troopers. 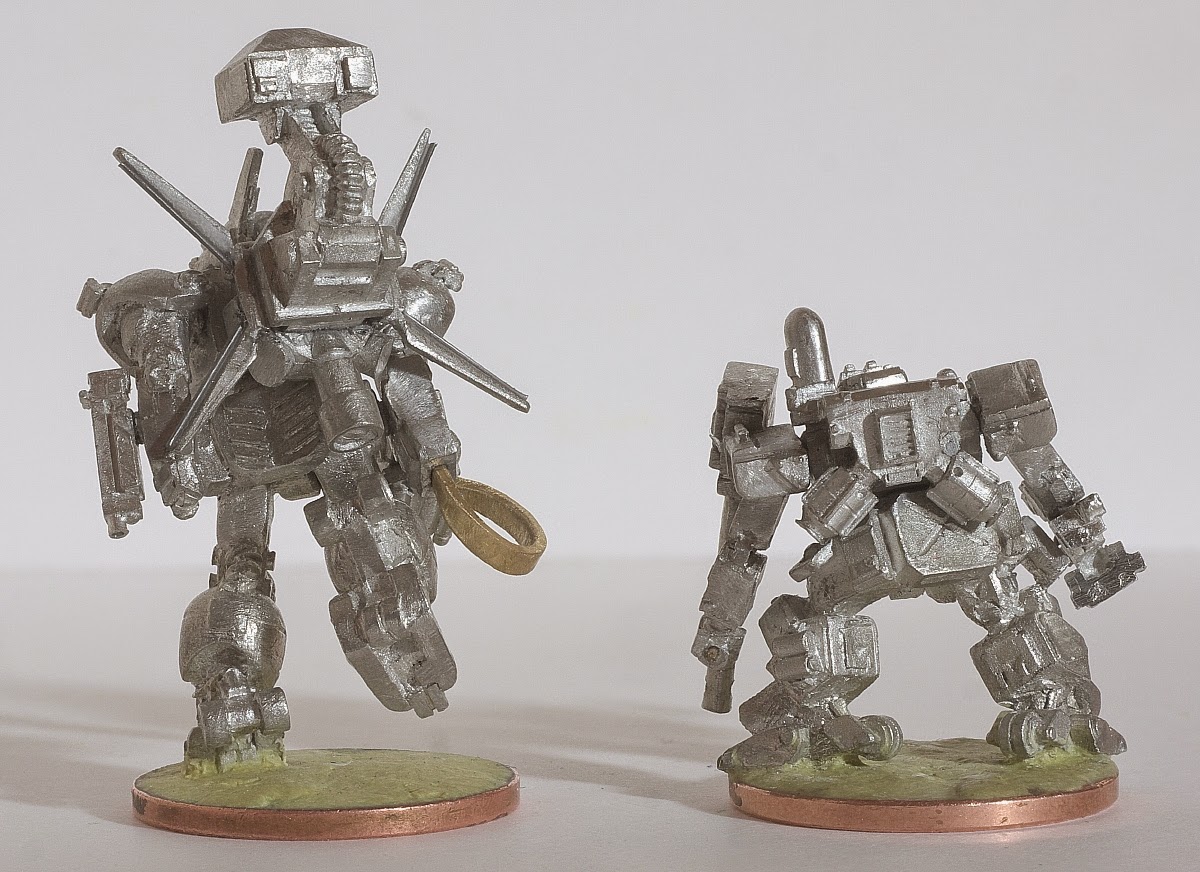 Showing the models from the rear, to show all the jiggery-pokery going on with these two conversion.  These models are really still a work in progress shots.  My plan is to now is to apply some  Milliput to tidy up the joints, and blend some parts together; in particular the antenna array on the rear of the left model (I've super-glued guitar wire onto the castings, because they're quite soft, and otherwise bend easily). 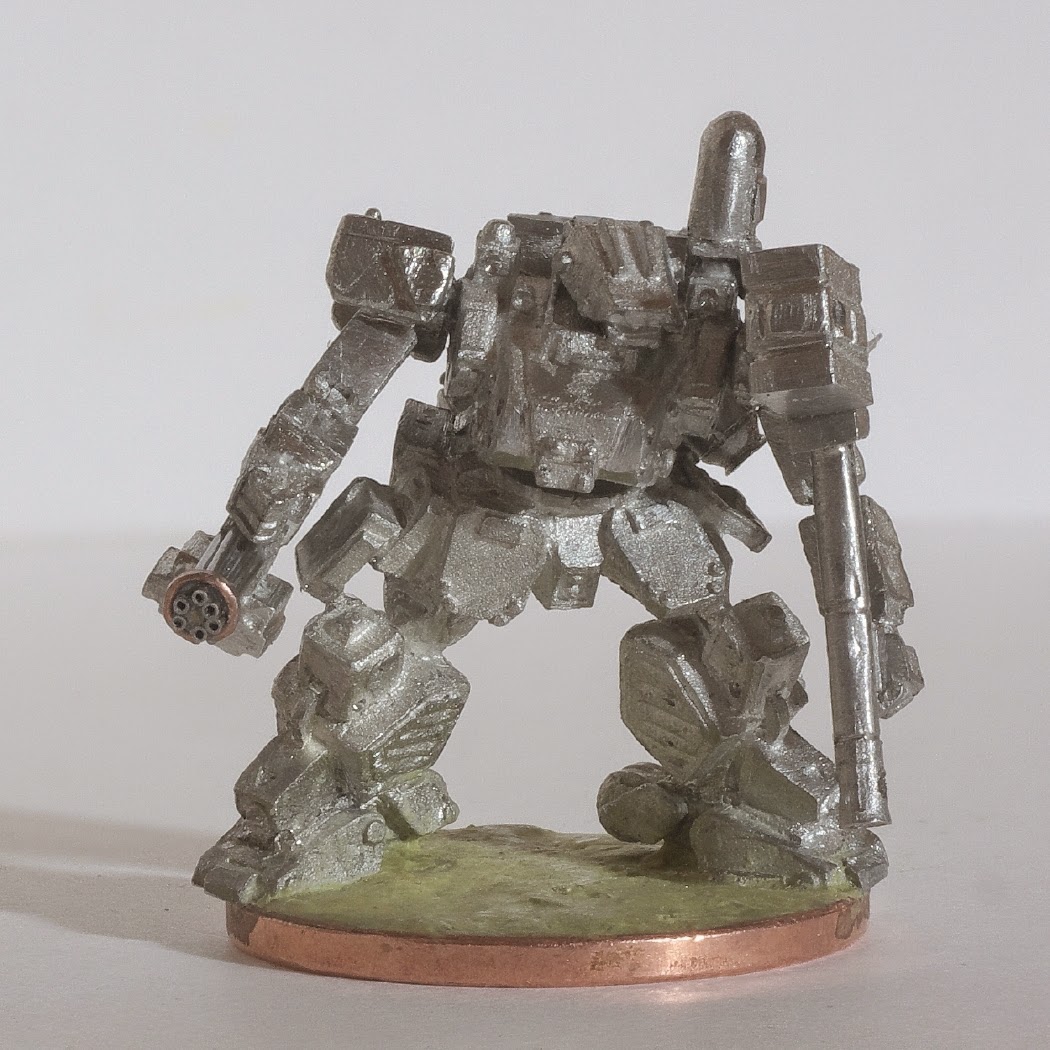 A larger close-up shot of the model, which represents an Army Green Beret Special Forces combat armour suit, which appears in my second novel for one of the major supporting characters.  It's mix and match of parts from the Hunter and Jaguar gears.  From the glossary in my novel:


CAS-3-Mod 1    Combat Armour System Dash (Mark) 3 Dash Model 1 is the Army’s latest upgrade to their drive suit, which is supplied to Special Forces troops.  It’s slightly heavier than a CASE-2X, and slower, but has the ability to be outfitted with a large array of heavy weapon systems according to its mission profile.


I'm going to add a round rocket launcher to the right should, the medium sized one I had looked wrong to me; I wanted more smaller rockets rather than five larger one.  So I've sent off for a small order of parts and stuff, and I will have to wait until they arrive to finish the model.  My original plan was to use Dream Pod 9s rotary rotary laser cannon (a quirky idea of combining mechanical and electronic systems to provide what might be better described as a pulse laser) for the basis of a M134 Gatling gun, but it was way too large.  My one complaint with the Heavy Gear models is that the weapons are disproportionally large, but that's my taste for things to be made to a scale and my desire for plausible hard SF models coming out.

So I ended up scratch-building the mini-gun that it's carrying in its right hand.  I used a BattleTech part, I think from a Mad Dog, but the barrels weren't up to snuff, so I replaced them with stainless steel micro-bore tubing.  A bit of a fag to cut and assemble, but it really looks the part.

In the left hand the model shoulders an automatic grenade launcher/auto-mortar – I'm still pondering the actual details and nomenclature.  I'll get back to this later, once I've done a bit more research. 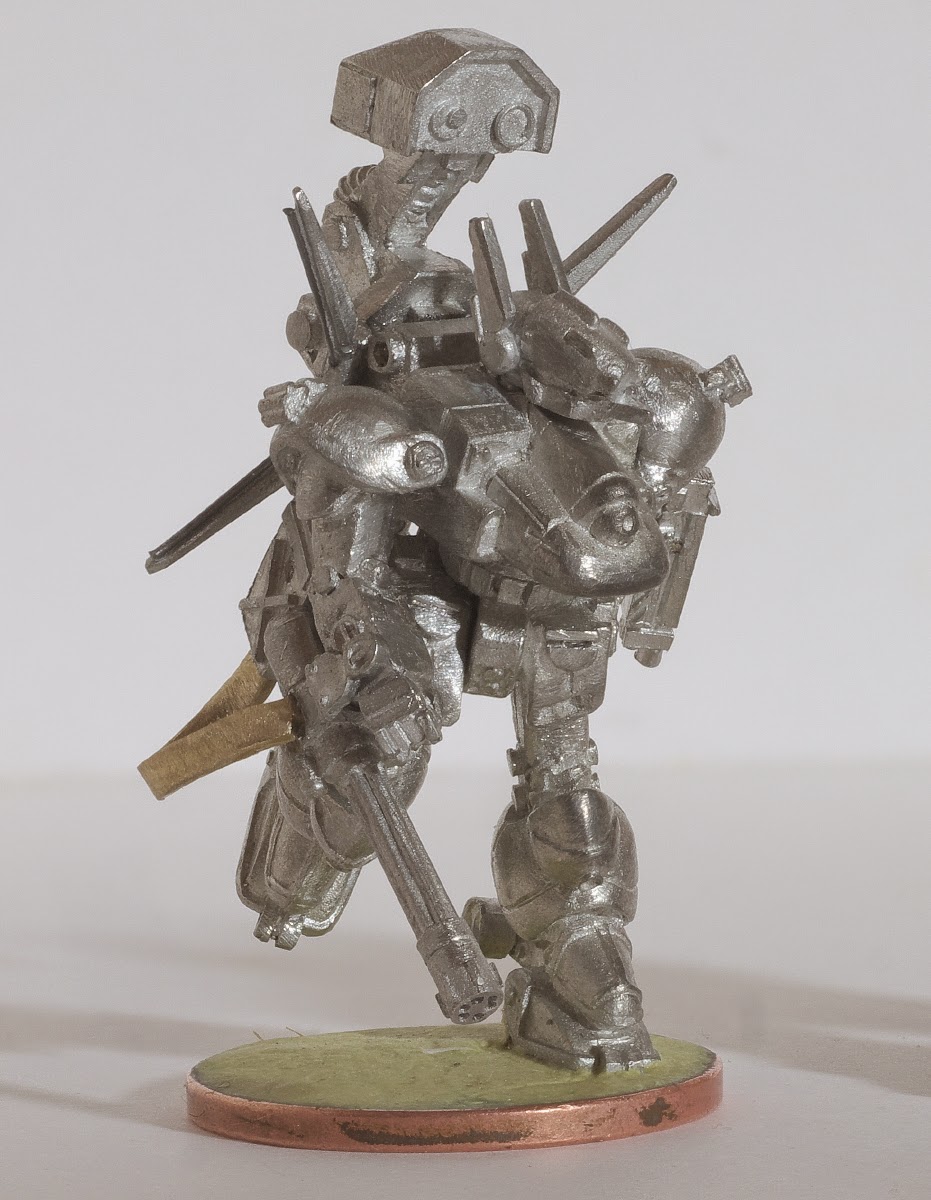 A close-up again of my Air Force Security Forces combat armour suit, the primary function being the control of android combat teams.  It appears in the third novel I've written, and again its a major characters ride.  The model is a combination of different parts from a selection of gears: Mamba arms and legs, the torso is from a Diamondback, it has a Razor Fang Cobra head, and the rear pack is from a Kodiak with Viper antennae.

It carries a modified Heavy Gear rotary laser cannon, which I've modded up to represent a 20 mm rotary auto-cannon with a scratch-built ammo feed.  Not easily seen, but it also has a modified pack gun on the left arm to represent a Browning M2HB .50 cal.

Again from the glossary in my novel:

M261    The M261 GAU-5L is Global Dynamics special lightweight rotary auto-cannon designed to be carried by combat armour suits that fires a 20 x 102 mm High explosive dual purpose anti-tank (HEDP) warhead with the rate of fire limited to 500 rounds per minute.  Due to the size of the round the range of the weapon is 3 kilometres.


I shall be using Dream Pod 9s GREL infantry as stand ins for the HOS PetMan androids with pictures to come.


HOS    Stands for Human Operator Surrogate, which are semi-autonomous robots with a hybrid expert system artificial intelligence operating system aka PetMan.  This allows the operator to effectively multi-task by distributing themselves across a network and act as a force multiplier; Global Dynamics Corporation Defense Industries sales pitch calls them An Army of One.


So that's it for a while, as I need to go away and paint these now.