Another year, another Salute.  How time flies by.  What doesn't change are the aspirational nature of the games on show.  Everything is bigger, brighter etc than anything you'll see on a club night or would normally be able to put on at home.  Unless your name is John Treadaway of course, and then this is all routine.  For the less blessed wargaming souls of this world, like myself, I have to play within my means.  So it's always good to see the games at Salute.

I, unlike many others, arrived late; at my own leisure so to speak.  I'm old enough, and can remember that my feet hurt from walking around Salute, and standing around in queues only makes this worse.  So I left home at 10.15 and arrived at 11.45, and was so able to walk straight in.  I hear that the queues were a lot less this year, primarily down to having a hall to stand in that had been allocated by Excel who have learnt that a horde of unwashed hairy wargamers lowers the tone of the place (not exactly what John Treadaway said to me, but that seemed to be the gist of it.)  What with the Sherlocked convention going on at Excel alongside the Marathon registration and other stuff, the place was heaving.


I'd heard that some German wargamers were coming over with a Battlestar Galactica game called Blood & Steel, and that they were giving away a six page free set of rules based on Full Thrust at the show.  The game was, as you can see, rather stunning.


More Cylon Basestars than you could shake a big stick at.  A slick looking game, and the crew were very easy to talk to, which given the crowds around their table was nice.


The Peterborough Wargames Club were running their Dambusters Challenge with a 1/72nd scale Lancaster on a fiendish looking remote controlled arm.  The game was simple, but effective and was heaving with people, and lots of people wanting to have a go. 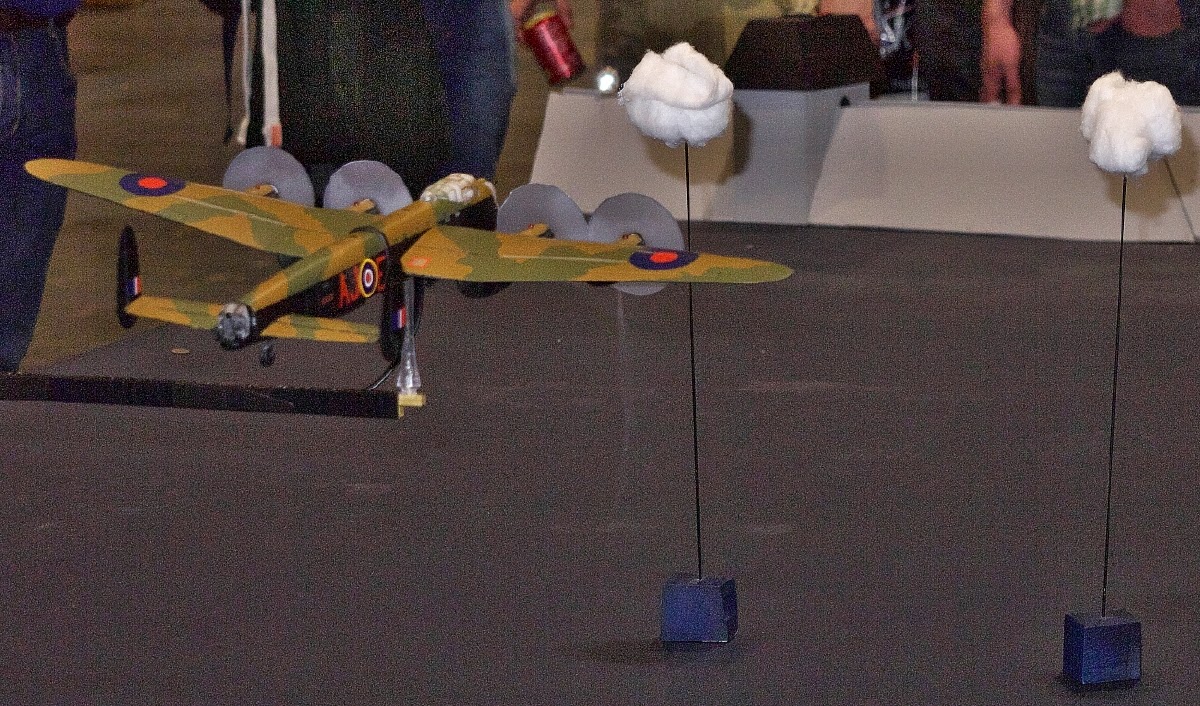 Coming up to the dam with flak all around the Lancaster.  If the player was successful a part of the dam could be removed and replaced to show the damage, and flooding.  Slickly run game that looked like a well oiled machine.


Hawk Wargames had this rather impressive model, which is now complete.  I saw it last year in its unfinished state, which was pretty epic then.  Totally awesome sauce display, with a big static table showing off their range of miniatures.  The big news is that there is going to be a space game to go with Dropzone Commander, provisional title Dropfleet Commander, which is due out later this year.  The unique selling point being that it will simulate orbital battles around a planet, rather than being a deep space game.

To save you the bother of counting, this ship carries one hundred dropships.


A close up of said dropships from the game in their hanger bays waiting to be dropped.  Oooheey.  The attention to detail borders on obsessive, other than I know that if you want something to look this good then paying attention to the small details is the only way to achieve a good looking end result. So kudos to the crew who made this; BTW the construction uses custom cast parts, which is why everything looks so good.


Hawk Games are clearly looking at the Star Wars Imperial star destroyers for their inspiration.  For those who are wondering there were miniatures of the ships in a much smaller scale for their future space combat game.  The game sounds interesting in that it deal with planetary invasions with about a dozen ships per side if I've understood things correctly.  The model of the UCMS Avenger represents a frigate, one of the smaller ships in the game.

This photo doesn't do justice to the terrain of this game, which was lovely.


Spartan Games were all about their new Halo line, and telling us about the new 15 mm ground combat game that will be accompanying the fleet action sets.  For Halo fans this is a big, big thing, even if Halo is no longer at the height of its popularity I can't image the fans not wanting to get this for all the lovely toys.

The fact that there is a space and ground combat game is again I think interesting, and of course this means that Spartan Games will in someways be going up against Hawk Games new Dropfleet Commander will bring some diversity and new blood into spaceship gaming.


Wargames' Illustrated game Cold War Gone Hot caught my eye for the the sheer scale of over the top action, which included what I assume was a Hercules doing a drop and go deployment of an artillery team while the Russians stormed across a damaged bridge.  What I'd call the Warhammer 40K version of the Cold War.

It all looked rather impressive, even if lacking in verisimilitude i.e: broke my sense of disbelief.  Still very pretty and gorgeous to look at.


The next game I caught up with was the rather more convincing reenactment of the Battle of Hoth from Star Wars: The Empire Strikes Back.  I think the Beasts of War may have run this, but I can't confirm the details, because the game is not listed in the brochure.

I also missed seeing the Millennium Falcon, because of the crowd of people around this impressive table.  It just didn't feel it was right to barge in, and disrupt the people playing the game who were clearly having a lot of fun.


Arcworlde had this rather stunning fantasy pirate game complete with zombie whale for bonus points.  I don't know much about them other than they ran a KickStarter (it seems everyone does nowadays), and can add nothing more than wow it looked stunning.


However stunning Arcworlde were, the bonkers over the top Essex Gamesters display with 1/56th scale ships using 28mm figures Fort George American War of Independence game blew them out of the water.  Not a lot moving when I saw it, maybe more of a static display, but crazily impressive modelling.  I should have tried to get some more pictures, but there were a row of frigates all in a line down one side of the table.  Needless to say it won the best game of the show award.


As always the South London Warlords were putting on impressive game to their own.  Stingray, where anything can happen in the next half hour.  Cue drums for battle-stations.  Given that Gerry Anderson's shows were a significant marker of my childhood, the stories depicting the World Aquanaut Security Patrol facing underwater terror were something exciting I looked forward to watching each week.


I took great glee in seeing this game, and the memories of Troy Tempest, Phones, Marina and Atlanta, and my favourite creepy villain Surface Agent X20 all came back to me.  I believe that the rules for this game will be available, though if you're like me than perhaps playing it in 1/300th scale will be a bit more manageable.


As you can imagine this table was surrounded by people watching the game being played, and just in case it wasn't obvious, the show had a real buzz this year.  People were out enjoying themselves and having a good time. 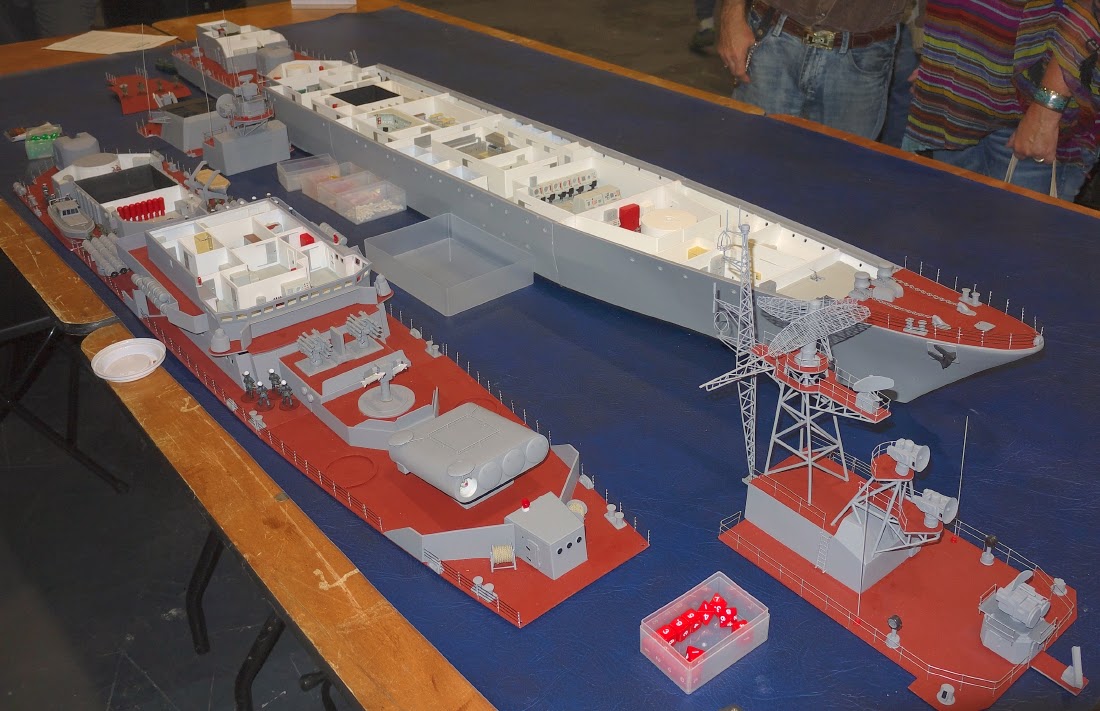 The final game I took a picture of, which I'm featuring last, because it leads into my follow-up blog post, is this rather magnificent model of a Soviet Union Krivak class frigate.  This game was put on by a group calling themselves MDK, and the game was titled Operation Broadsword – The Cold War Went Wet.  A contingent of Royal Marine Commandos and SBS mounting a raid on the ship, all done in 28 mm.

Apposite because after going around the show I went off with friends to see HMS Defender, which you can read about in Après-Salute.