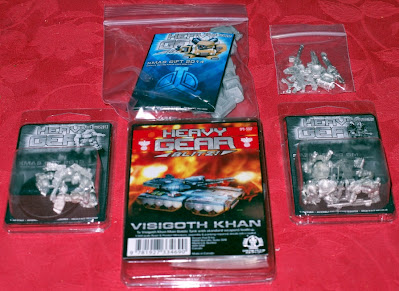 I've been mumbling about Heavy Gear for a while, having gone so far as to put my money where my mouth is by signing up for the KickStarter, and buying miniatures, but my intent is not so much to play games in the Terra Nova setting, rather to play games in the my own setting.

For those who follow my writing blog you will know I've written my first novel working title Bad Dog.  I've even written the first drafts of two sequels, so I'm quite invested in my story, and being a wargamer I want to play games in my universe.

The above are a load of bits & pieces that arrived recently.

Some were bought specifically to provide the parts for converting some Dream Pod 9 miniatures to make a model of my CASE-2X combat armour, called Dogs by the Marine Corps pilots in my novel.  My first attempt at making a Dog can be seen here.  I wasn't totally happy with it, because it just looked like a slightly modified Heavy Gear Jager, which funnily enough was what it was.

So here is my second attempt using the main torso from a Heavy Gear Mamba to change the look of my combat armour suit. 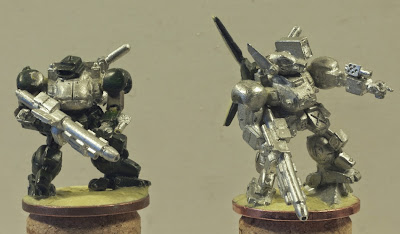 On the left is my heroes mecha from the first novel, and on the right is her officer variant from the sequels.

The command variant adds a shoulder mounted rocket pod, and has extra antennae for all the communications gear a command suit carries.  The head on the command model comes from Dream Pod 9s Razor Fang Mamba.

Tell me what you think.  Be honest, this is for posterity, as in they will become canonical  and I want to get the look right.  For instance I could go with Mamba heads for the basic Dogs, and use Cobra heads for the command variants?  My next step is to make models up for the rest of the named characters in Bad Dog, followed by an Army Special Forces suit from the first sequel called Strike Dog, and an Air Force Forward Observer suit from the third novel called Ghost Dog.

After that there will be rules.  Whether these will be variant Heavy Gear Blitz Beta, or something else will rather depend on play-testing of the new rules from Dream Pod 9.  Either way models will be made and games will be played.