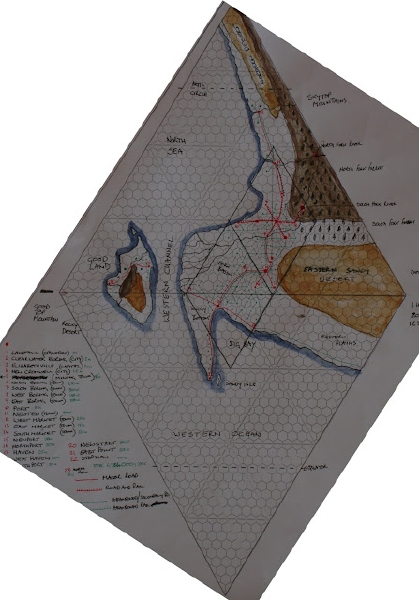 As you can see this map has an area marked that could be viewed in more detail. However, we began by looking at the general area and the players noted the large number of apparently abandoned settlements, ranging from small villages up to several large cities. The enormity of the task ahead did not phase my players, who got stuck in and started sifting through the data, and asking questions of me for clarification of things they didn't understand.
I was able to then make a list of all the appropriate people they needed to talk to onworld.

The time just flew by as the various options were discussed and force allocation plans were made. The players had to deal with the reality that they would most likely have to deploy in two groups as heavy lift was at a premium, and given the operational necessity of having assets combat ready, rather than packed up efficiently in packing cases.

The following alert levels, rules of engagement, mission task organisation, and operational plans were formulated by the players.

The players planned to deploy infantry as observation posts at four likely routes that the enemy might use to hit their designated targets. Observations posts would be set up at Oldtown, Firston, Midville and Forest town.

The actual forces that would be used for fighting were split into three groups code named Hammer, Anvil and Tongs.

The consensus was that the players wanted to prevent the enemy mech from returning to its dropship, and force the dropship to leave without it. Hammer would be used to deal with the mech, while Anvil dealt with the dropship. The observation posts would monitor key routes to likely targets and report in if they saw enemy movement.

This plan would pretty much end any further pirate raids, on the basis that Mummerset would be no longer seen as easy pickings.

If it turns out that the pirates are more numerous, or better equipped than the Intel suggested, then after the deployment of Hammer and Anvil, the VTOLs would be sent back to pick up Tongs (the slower assets), which can then be deployed as necessary to stiffen the main attack.
Posted by  Ashley at 14:50