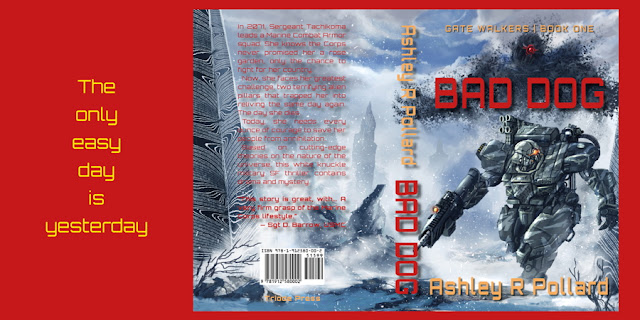 Please excuse the fact that I'm posting the latest review of Bad Dog from a 20 year Navy veteran. I felt honoured to have had this man take the time and effort to write something about my work. Thank you sir.

Ok, I'm not a professional book reviewer. If you are looking for a critique on the art of writing, move along. I'm just a reader, and a retired military member and all of my thoughts start from there.

Truthfully, it is a pretty good story. I think it reads a bit like a short story, which I can appreciate. Don't get me wrong, I like a good Lord of the Rings style epic as much as the next guy, but now and again I like something shorter and to the point. This book scratched that itch. I found it pretty compelling from start to finish, and I can't wait for the next book to come out in print (I think it is already out in electronic format, but I like paper). I love a good near-future story where things are just different enough to make your imagination kick into gear, but not so foreign that I'm sitting around thinking "What's a flingledorp and why on Earth is this one attached to the hangwopper of a flogtrud?" Look, I want to follow the story without too much confusion. Pollard succeeded for me. I'm a 20 year veteran of the Navy and I'll say that about 99% of all the jargon, personalities, and events feel dead on which really added to my enjoyment and the believability of the story. For those of you with less military experience, Pollard does include a nice glossary in the back of the book so you don't get lost in all the TLAs (Three Letter Acronyms... military loves them).

I don't know if I have any downsides to relay, but I'm pretty easy to please. I'm hoping there is more to come soon.

And here are some more reviews...

This the author first novel and I got totally absorbed from the first page to the end.

This is SF Military but don't expect finding super-uber soldiers or extraterrestrial advanced enemies fighting each other in remote galaxies, no "Starship Troopers" rehearsal at all. On the contrary, set in in the last quarter of the XXI century, the book provides a glimpse of what could be a very realistic progressive evolution of modern tactical warfare and weapons... in a geopolitical context that will also be familiar to the reader, where a reconfigured US (called "Confederated States" but not yet explained in the book what happened) is challenged by an increasingly assertive China in a remote region in Afghanistan.

The book focuses in a Marine recon unit and the pace of the action is truly good.

The atmosphere is very realistic thanks to the extensive and thorough(full) military research undertaken by the author that you can follow in her personal blog.

After I finished reading the novel, I really eager for more. Luckily a second part is very close to publication.

I can strongly recommend the book and if the sequels are as good as the initial work, I can see Ashley Pollard becoming a reference in this writing genre

Excellent book. A fresh view on near future power armor warfare. I felt that I was reading a good story and not the writer's opinions on how they live their own life, which is hard to find these days in any genre.

This book caught me pleasantly by surprise. I had settled into the near-future military action and begun to suspect that powered suits were the extent of the Science Fiction, but then it took off in a totally unexpected direction which I won't spoil for you. I ended up thoroughly gripped and unable to put it down until I knew how it played out. I love SF and it's great to find a new writer with ideas as well as genuinely good writing. I look forward to more.