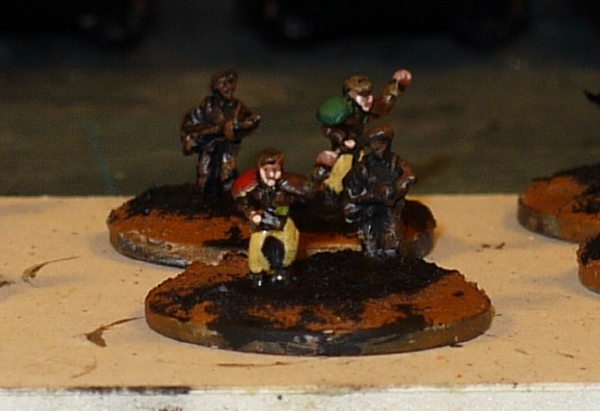 I meant to post this a few days ago, but didn't quite find the time to sit down and write it on Wednesday afternoon as planned. Went to the dentist instead of writing a blog, I know which I prefer.

Anyway, been painting and doing basing of figures for my Mummerset campaign.  The basing being the problematical bit as after playing four games BattleTech with miniatures using our house rules certain things have been brought into focus for me and the group I play with.

Infantry are really tiny in comparison to mechs and vehicles and are readily confused by people who need glasses to read. BattleTech is not at heart an infantry centric game.  The clue is in the title, and while there are rules to expand the repertoire of infantry types, those rules tend to add to the rule burden, rather than actually creating a wider focus on combined arms.

As a result we have already gone from "realistic" platoons with mixed weapons by squads back to generic platoons that have a theme e.g: this is a laser platoon, or SRM launcher platoon, which is a shame in a way, because it loses flavour.  However, we are still employing squads that fire as platoons, which is good, and one of the things I've been doing is re-examining the way I base the figures.

BattleTech is a boardgame that has one hex equaling 30 metres, which means that infantry platoons are tripped up by the granularity of the time and ground scale assumptions; 10 seconds per turn for those who are not familiar with the game.

Therefore the game is working to a 1:1000th ground scale where the models are nominally 1:300th scale so we start from the position where the models are just over three times too large.  Now one solution is to use smaller models, say 2mm miniatures, but this is not to everyone's taste, and one can argue that one might as well use counters at that point.  Depending on your taste for such things. The other side of the coin is that you change the ground scale, which funnily enough is exactly what the official rules recommend.

Of course the eagle eyed alert reader will of spotted that even increasing the ground scale from 1:1000th to 1:500th still doesn't make the model scale equal to the ground scale.  Not generally a problem except for two things.  BattleTech miniatures are notoriously inconsistent in scale, with the dreaded scale creep over the last 25 years making newer models larger still, and the original smaller models were in my opinion closer to 1:220th scale (Z gauge in model railway terms) to begin with.  What you are left with is how to decide what compromise works best for you?

I'll be direct and to the point here and say that my tastes run towards mechs being shorter than the nominal 40 foot height that the board-game assumes,  and having a larger range of sizes depending on weight class.  So I visualize a light mech at around 20 to 25 feet tall, a medium mech around 25 to 30 foot tall, a heavy mech 30 to 35 feet tall, and assault mechs 35 to 40 foot tall.  Just my opinion.

So measuring up mech models and making some choices about how to interpret their size we can chose a scale that makes us happy.  My choice is to assume 1.6mm to the foot, or around 1:160th scale. Now that choice means that even with a a larger ground scale the models are still about three times larger than the ground scale.  So all that examination has lead us precisely no where.

Therefore one just has to be pragmatic and accept that one's choices have costs and benefits and decide what is important to you.  I want the infantry to based as squads that make up platoons, but given the size of the infantry models the most I can get on a 25mm base is three to four models, which to me is not enough to represent a squad.  So I've ended up having two bases per squad, and four squads squad platoons require eight bases in total.  However, as we have played games the need to be able to remove single casualties became apparent, and after some experimentation the solution I have reached is to add to single figures bases, and one base with two figures on it.

We shall just ignore the whole frontage that a platoon occupies, as we've already accepted that the figure to ground scale is an abstraction to make the game playable on the size of table we have available.