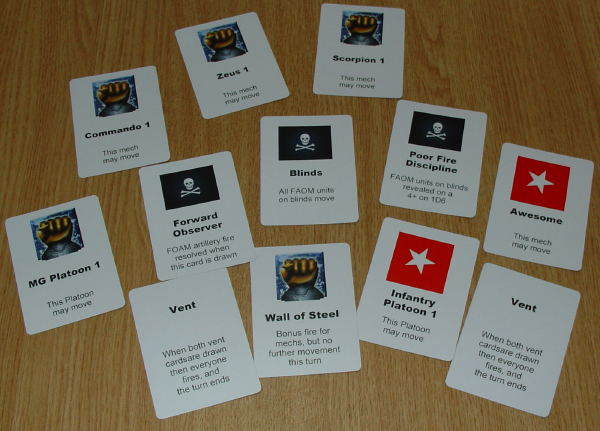 As I said in an earlier blog entry I would come back and describe the card system that we have implemented for playing with BattleTech. The goal for using the cards was to remove the control players had over the order they move their units in and too replace the certainty of knowing one would always have one spare unit to move last if one had won the initiative.

By replacing the you move one unit and then I move one unit with a random order of movement system one has to deal with the battle developing from chaos into order, rather than having control from the get go.

The way the cards work was shamelessly stolen from TooFat Lardies games, in particular their Charlie Don't Surf  and Through the Mud and the Blood rules. At first I found the need for cards off putting. Why oh why not have some simpler mechanism driven by dice? However, after playing Terrible Sharp Sword, an American Civil War supplement for their Sharp Practice at Salute this year I was taken by the flexibility that the addition that cards bring to a game.

So I set out to make some cards of my own, and not satisfied with using standard playing cards with sticky labels stuck on them I took advantage of a Hong Kong based playing card maker called ArtsCow who do print on demand cards set to one's own specification.

So I made up a list of all the units that I wanted to be able to field for my campaign, used ArtsCow's online Silverlight design package and got my first two sets of cards made up for my Mummerset campaign, which you can see a selection of in the picture at the top of the post.

I also stole another idea from TooFat Lardies, the idea of a variable length turn that is governed by what they call the "tea break" card, but for BattleTech I'm calling the "vent" card. I use two of these for the game shuffled into the pack. One ignores the first draw, but the turn ends when the second one is drawn. This means that turns can have lots of units being moved, or very few units being moved, and it is all down to the luck of the cards.

I've also added a House Steiner "Wall of Steel" card that allows the Steiner side to fire when the card is drawn, and fire again at the end of the turn, but at the cost of losing movement for all battlemechs that haven't yet moved that turn. However, this is a very powerful special card and after the game we decided that once the Steiner player uses it, the card is then discarded from the deck.

Other cards include "airstrike" and moving on "blinds". Airstrikes work a bit like an artillery barrage and a special event, so the airstrike doesn't require a forward observer card to use, but once used is discarded from the deck. Blinds are for hidden movement. Each side will be able to deploy as hidden identity, with a number of dummy blinds as well. Units on blinds are revealed if observed on a roll of 8+ on 2D6, when the unit on the blind fires, or if it is fired upon.

No doubt I will think of other special event cards, for instance "Banzai" for House Kurita, and add them to packs of cards I will need to design for my other BattleTech forces I have, but at the moment I'm concentrating on only adding stuff I need for the campaign, so I will need to think about House Marik next.