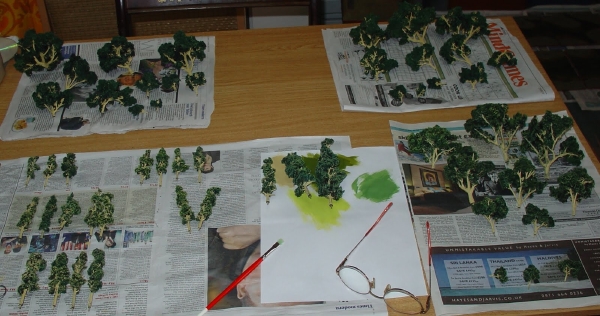 This weekend started out with a rare burger from Byron's, and afterwards treating myself to a new handbag for work from the House of Fraser, both establishments being local to me at the Westfield's shopping center, just round the corner from where I live. Wow, living life to the limits is my motto, and this morning I even went and had my hair done at my local hairdresser.

Compared to the excitement of painting trees three shades of green the above is probably all rather dull. I've been struggling through yet another steep learning curve with my new tree project, and down to the simple fact that I can't bear to do anything "just good enough", I've been trying to produce the best trees that I can using Woodland Scenics products as a starting point.

Anyway, as I'm writing this now I've just watched Dr Who: The Doctor's Wife and afterwards I was dry brushing green on the trees. Second shade in this case. As I want the trees to have variety I've split the 32 deciduous trees I'm painting into three groups, as can be seen above. All have sea green as the base colour, but then have two other shades of green painted over the top. The plan being to have three shades of green on every tree, but not the same three shades of green on all of them

I originally started by priming the trees by spraying them black and then  I sprayed the trunks in red primer. On top of this I then drybrushed sea green to delineate the foliage from the trunk and worked from there.Unfortunately, I made a bit of a mess of the drybrushing and overdid the amount of pain I put on, which was so not good. So I resprayed them black and started again without painting the trunks in red primer, which was okay, but I failed to get the tonal variation I wanted and though that all the trees looked rather dull and uninteresting. So I re-drybrushed them and changed the combination of greens that I was using to add more variation to the three basic shades of green I was painting my forest.

I would like to say that this plan I had worked. It sort of did, but it doesn't account for the fact that I ended up painting each batch of trees three times, improving on the application, order and combination of shade of green. In addition, The reason for the revision was down to the order that I chose to paint the colours, and a big confounding variable was painting the tree trunks, which cause one of the repaints. 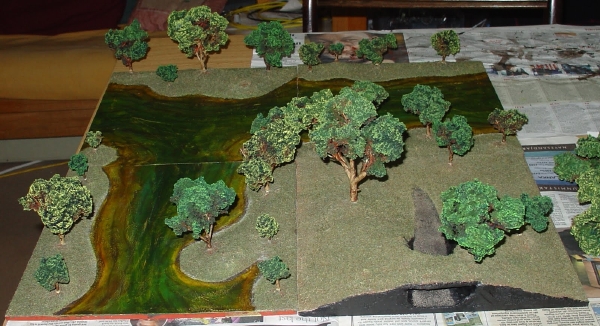 Hopefully you can all now see that there are three distinct shades of green in this forest down by the river side?

After taking the above pictures I spent some time drybrushing the tree trunks with pale flesh to give them a grey looking texture, which has improved upon what you can see above. Finally, I whisked some canary yellow over the upper surfaces of all the trees to make them pop a bit more.

From my observation of trees I kind of know that they are complex fractal structures that reflect light in many different directions due to the structure of the leaves, which are themselves fractal in nature. Capturing the lacy structure of trees is extremely difficult, especially when one has to make them robust enough to be handled in a game.

So there you have it. One weekend spent slaving over a hot forest...