I have been off from work all of this week, since the funeral in fact, so I have had a lot of spare time and I've been fairly busy making and painting stuff. Probably not done as much as I could have done, but there again it has been a difficult period for me having to deal with a surprising amount of grief from the loss of my mother-in-law. To keep myself focused on things, other than loss,  I've been building terrain boards. This includes some new river boards, which I've decided to call the Red River Delta project, which is the first step towards my goal of being able to play Vietnam riverine delta games using Charlie Don't Surf from TooFat Lardies.

Anyways here are some work-in-progress shots of the eight boards I'm making. 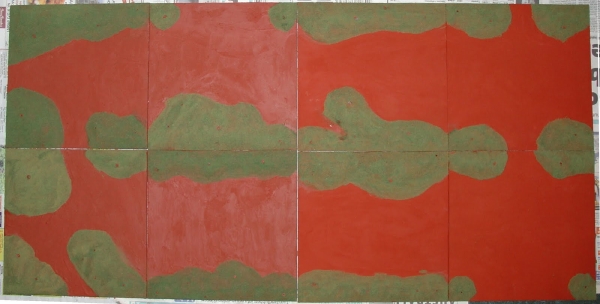 The picture above shows all the polystyrene contours after been covered with filler, then textured using ground foam, and finally painted. I use a sort of wet-drybrush technique for terrain where I layer alternate contrasting earth colour tones over one another to get a multicoloured soil base. 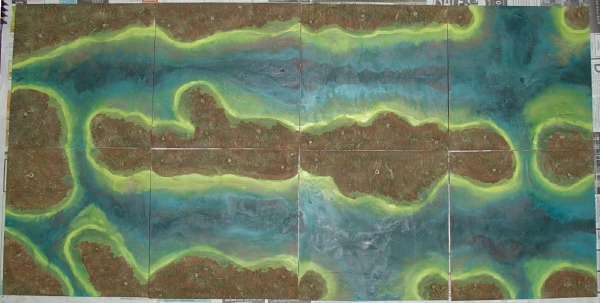 After painting the land areas I then used an extended wet paint technique, blending three different colours while the paint was still wet, to define the river. After allowing the river to dry overnight,  I applied two washes over the top, and then sealed the whole thing with ultra gloss gel. I then plan to layer another two washed over the top of the gloss gel before applying  a coat of Woodland Scenic's realistic water over the top to finish.

In the mean time I've been busy applying static grass over the painted terrain, but I haven't yet taken a picture of this, but I will do so in due course. Also you probably can't really see from the pictures, but there are loads of embedded tree trunks in the terrain, which is all part and parcel of my mark two terrain boards.

However, while this terrain is is for Vietnam games, it would be fair to say that the terrain will also be used for my Operation Sandbox Campaign set on the mythical world of Mummerset, where it will represent the Fork River Delta. I imagine that at least one battle will take place around the delta during the course of the campaign. I could be wrong of course, but OTOH I am the GM, so if any of my players are reading this they now have the conundrum of deciding whether this is info that will help them or not?