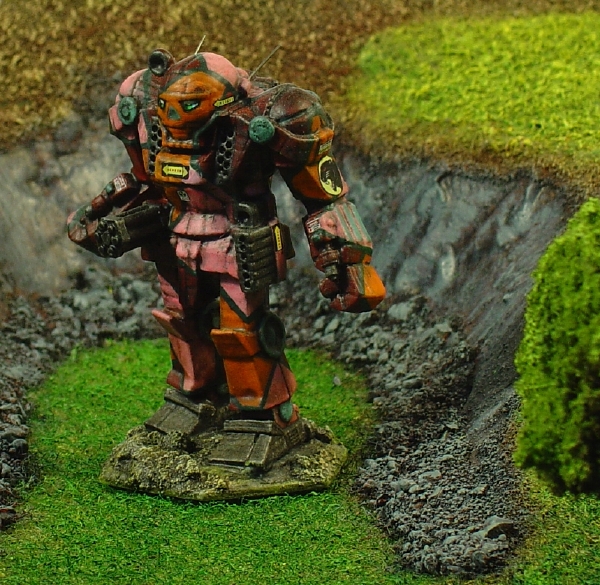 BattleTech is a wargame that has not one, but two main pages on the TV Tropes site. Who'd have thought huh?

The link above deals with the general tropes of BattleTech, like duh! BTW: that is of course me using a trope.  However, more importantly, as an introduction to the world of BattleTech I really can't recommend this page enough for the casual person who wants to know what's it all about Alfie? Sorry for that shout out.

This next link is to a page on how FASA allowed the BattleTech universe to be expanded and the various tropes that have become signature items of the franchise. Be warned that clicking on either of these links will take you to pages with lots of other links on them that form a hypertext database, or Wiki as they are now called.

So what is a trope, apart from the content of a site called TV Tropes that is?

It is a figure of speech, or a metaphor if you prefer, that describes something using words whose literal meanings are different from what they say, for example "road works", which means a road that is being dug up, or repaired, but not one that is literally working. Using a metaphor allows people to explain concepts that are not easily understood using language that describes something else. Often these end up as common clichés, for instance "blue sky thinking".

Metaphors can then become metonyms, which are figures of speech that become the thing. For instance I have my wheels meaning I have a motor car. Funnily enough a trope can become ironic through meaning the opposite of what was originally intended and this trope has many flavours too. My favourite being Socratic irony, or the "Colombo gambit", where you start off by stating how one doesn't understand something and ask the other person to explain it. This then leads the inherent contradictions being spotted in what has been said.

When you have a trope that contains two words that have opposite meanings you then move into the realm of the oxymoronic, an obvious example is "living dead", and another is "military intelligence", the latter having been described as "a highly refined organisation of overwhelming generalities, based on vague assumptions, and debatable figures drawn from undisclosed activities, pursued by persons of diverse motivation, and questionable mentality, in the midst of unimaginable confusion".

Of course that is a gross exaggeration of the process behind "military intelligence" for comic effect, which therefore make it hyperbole, which funnily enough is another example of a trope. Ironic huh? Probably a bit of an understatement to describe military intelligence in this manner too, something that we Brits do with a certain amount of aplomb. I always remember an RAF chap being interviewed after a raid over Berlin who described that whole death defying ordeal as a bit of a "whizz bang". In trope terms such understatement is called a litote. A more modern example of a litote is of course the use of double negatives.

Any metaphor/trope that starts off as a counter proposition is counted as an antithesis, and you thought that it was just a part of dialectics. Well it is, but dialectics is a part of rhetoric, which uses metaphor as the basis for constructing arguments. So finally we get to the end of the different categories of tropes with the synecdoche. This is the mirror of the metonym in that the description has replaced the thing to the extent that it starts to become a cliché, though not all synecdoches are clichés.

So BattleTech is all of the above and more, which is probably why I like it in spite of the ludicrousness of the central conceit.