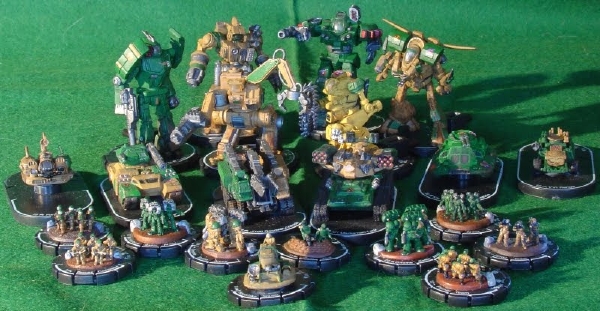 Here is a selection of the largest of the three MechWarrior: Dark Age/Age of Darkness forces that I acquired when buying infantry and battle-armour figures for my BattleTech support regiment.

I actually now have quite a few more since I took the above picture, as quite frankly buying MechWarrior Booster packs is, I imagine, a little bit psychologically like taking crack cocaine. You get the rush of the hit and then afterwards you want another hit again.

As those of you who have been following this blog know, I only bought a load of MechWarrior infantry figures so I could make up squads of infantry for playing BattleTech. Little did I know then that I'd get bitten by the bug that is MechWarrior frenzy, and I've just played my first ever MechWarrior Dark Age clix game this weekend. Clive and I set up a training game with 200 points per side. We each had a battlemech, two vehicles and three stands of infantry. Including reading the rule book through from cover to cover, It took us a couple of hours to play the game from set up to finish. By the end of the game I had got my head around the order that the stats were on the dial, after initially confusing myself with the order that the damage and attack values were placed on the dial.

The combat dial is a fabulous idea, because the information density is high, while paperwork is low. However, MechWarrior is not BattleTech, well no surprise there as one is spelt MechWarrior, and the other BattleTech. Seriously though, MechWarrior is actually a Command & Control game, whereas BattleTech is a game of battlemech dueling. When I get around to playing BattleForce Quick Strike I will be able to compare all three systems and feedback here what I like. So to sum up. MechWarrior has some really interesting game mechanics, and a nice balance of play from the game mechanisms. I'm really looking forward to playing another game sooner, rather than later, and I'm even more motivated to buy stuff.