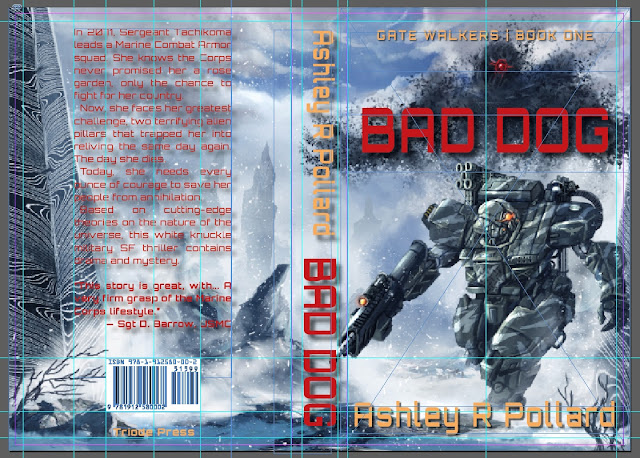 Continuing on from Part 1, what if anything do stories about war tell us about what war is good for?

Probably not a lot in the bigger scheme of things, because telling people what war is good for is probably not the primary remit of story telling in Western culture.

However, wars are fought for a wide number of reasons.

When those reasons ally with the maintenance of one’s society in the face of others who want to force change where change is unwanted, and though war involves lots of bad things happening to good people, good things are created too. The argument of avoiding war is one that has to be tempered with the costs of avoiding war, because while wars are frightening things, they're an illustration that there are no simple answers to some problems in life.

If science fiction is a genre that speculates about the effects of technological progress on society, where technological changes are driven by the need for victory, then military SF stories must therefore be a valid topic.

However, as I have observed, war is more than individual fighting; war is an institution.

Therefore like all institutions the people who work within the confines of the military hierarchy have a set of beliefs and theories based on reasoning from years of tradition as supporting evidence. If military SF fails anywhere it is in focusing on tactics, and not giving the reader a strategic context, with the necessary understanding of the operational problems that the military has to face.

The old adage in the military is that amateurs talk tactics while professionals talk logistics underpins my observation.

I can see that this makes writing a military story that works at the level of the character motivation a bit of a challenge. Especially if one wants to keep the story interesting; as descriptions of sergeants reading off loading manifests is probably not going to make for the most exciting conflicts.

Though as I write this I know I have a scene about checking the manifests of containers about to be loaded on trucks for a mission. So it can be done.

Assuming that one agrees that stories are driven by conflicts arising between characters and events; otherwise known as the plot, then yes, one can argue about the merits of each individual story, and its value.

But here’s the thing; if you don’t like a story it doesn’t mean it shouldn’t have been written. Or that people should stop reading it, because that's an opinion.

Remembering that opinions may be driven by feelings, because opinions are things that we hold dear. As such emotions/feeling cannot be subject to rigorous testing to be used as proof of anything much.

Another recommendation of a book, which I thought was well worth the time it took me to read it, Michael Z. Williamson's A Long Time Until Now.  A quick overview here.

More in part three, which will be out on Friday.