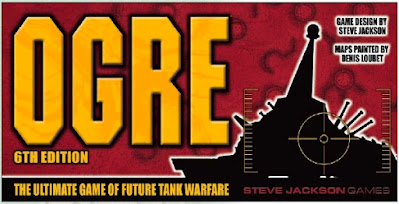 Blog Advisory:  I have a snarky sense of humour, see example above, and if you are easily offended by it then perhaps you should stop reading now.  This advisory is to flag that I am British, live in England, which is a part of Europe, and that American cultural language and social assumptions are only one of many in the World.

I'm also incredibly old, and still talk about SF shows that were made before some of you were born.  So you may find it hard to understand my metaphors; in addition my humour may offend those who are sensitive to things that trigger a strong negative affective response.  I offer no apology if it does.  With those terms and conditions, and allowing for any errors and omissions, lets start.

If you've not come here from the SJG forums, then this post may fly over your head.

The Ogre miniature line was put back into production last year as part of SJG promise from the Ogre Kickstarter.  After Xmas a price rise was announced, and a big furore arose over how much they were going to cost now.

As a result SJG pulled the line from sale to review their marketing and costs.

This has in turn caused another furore.  In my opinion, the attempt to avoid the adverse consumer reaction only generated bad feelings amongst the rabid Ogre community, but SJG were on a hiding to nothing over this matter, because no matter what they did they were caught in a Catch 22 scenario.

The arguments around the price of the miniatures provoked these four responses:

1. Why can't the miniatures be made through contract casting to make them cheaper?

2. What about licensing them out to another firm to cast who can make them cheaper?

3. You could always start your own casting company and watch the money roll in.

4. Wouldn't it be cheaper to make them in plastic?

I'm now going to take all of the above apart.

1.  First off you have to find a contract casting firm that will take on the job, and that is easier said than done.  Secondly, said contractor will charge SJG for the casting, because they want to make a profit too.

Therefore, it is highly unlikely, that SJG can then sell the miniatures at a price that will make them a profit that is any cheaper than the price they put them up for sale after Xmas, which caused such an outrage in the first place.

If I were at SJG I think that I think I would be saying to myself something along the lines of, "Produce a few miniatures they said, make some money they said, have some fun they said, welcome to the party pal," (in John McClane's voice from Die Hard).

2. Licensing another firm to produce Ogre miniatures requires that there be a firm who is interested in paying SJG money for the privilege of casting miniatures of a range that the other firm will never own the intellectual property rights to.

This cuts into the other firms profit margin, because the cost of the license will have to be added as a factor into the final selling price.  Much easier to cast models that one owns the IP too, and be done with it.

3.  This comment was actually made by someone associated with SJG, but I've included it here, because it makes a very salient point.

It stems from my two previous comments that even if one had a pot full of cash to start up one's own business, one would inevitably be faced with the bottom line; which is keeping one's company profitable.  Assuming that one loves the SJG Ogre range so much that you just have to get out there and do it, then what you are faced with is tying yourself down to being a small manufacturer of someone else's IP.

Wave bye, bye to your free time, and don't expect to be driving a Ferrari, or the company having its own Learjet any time soon.

4. The simple answer is no, and saying that other wargame firms produce plastics misses the fact that they may have economies of scale that SJG will never have for a line of Ogre miniatures in plastic.  And it gets worse than that, because the quality of the plastics that one could afford are probably not going to satisfy the needs of the customers who want Ogre miniatures.

For example take CGLs plastic mechs that are included in their boxed sets of BattleTech.  While CGL have included improved models of four of the mechs, the rest of the plastic miniatures are best described as adequate; where adequate means good enough for getting players into the game, but not meeting the needs of players like me who are into miniatures, and who like modifying their models.

So, I shall continue to hope that SJG do start selling the metal miniatures again, but I will not be telling them how to do that, because you know what?  They are not stupid, and know all of the above far better than some random person on the internet with an opinion.  "So been there, chewed gum, kicked ass, and if anyone asks have I paid my dues; the cheque is in the post pal," (in the voice of Jack Burton from Big Trouble in Little China for those too young to know).